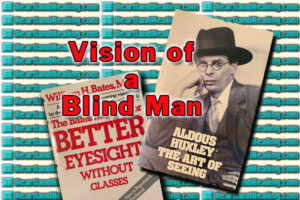 Do you wear glasses? According to the group called the Vision Council of America, 75 percent of us do. Take that number with a big grain of salt since that “council” is an organ for the optical industry that makes glasses and “vision correction” lenses. Which brings up another point. Glasses don’t “correct vision.” Those snake oil types may say they do but glasses do nothing to correct your vision. Need proof? Just take your glasses off. Is your vision corrected now? Didn’t think so. The reality is that glasses actually make your eyes lazy and we become dependent on them.

A Blind Man’s Vision Aldous Huxley was able to see into the future. In Huxley’s 1931 novel Brave New World, he wrote about the world we live in now. Huxley’s biggest error in his novel was that he thought it would take until the year 2540 for the world to reach dystopia. I say we’ve pretty much entered that dystopian phase now.

Brave New World is remarkable in its prescience. And one of the most remarkable things about the novel, which has been ranked as the fifth most important English-language novel of the 20th century, is that Huxley wrote it during a time in his life when he had become legally blind. He couldn’t see the words in front of his face but he could see the world of the future. In Huxley’s Brave New World, humans were hatched in pods, dominated by technology and the common baseline of existence was valued more than the basic freedoms of humanity. That’s kind of the arc we see for humanity today unless wiser minds carry the day. (It doesn’t take a village. It takes a family.)

Ten years after. In 1942, Huxley had enough of being blind. He learned about a doctor, an ophthalmologist, named William Bates of Cornell University. Bates developed what is known and published as The Bates Method for Better Eyesight Without Glasses, first published as Perfect Sight Without Glasses in 1920. The book is now in public domain.

Dr. Bates’ program exposes the primary failure of allopathic medicine: It treats symptoms rather than healing. In the case of eyeglasses, it was clear to Bates. Corrective lenses adjust refraction of incoming light but do nothing to heal or correct eye problems. In fact, corrective lenses, in Bates’ opinion and that of many others, actually harm and interfere with the ability of the eye to correct vision.

After learning and using Bates’ method to actually correct sight, Huxley could see again. It wasn’t a total recovery of biblical proportions but he was able to read again and see again; enough so that he was moved to write his book, The Art of Seeing. In it, he describes his use of the Bates Method and the return to sightedness. He also explores the metaphysic and psychological considerations of vision.

Bates, Huxley and others are not the first or only persons who ever wondered why it was believed that the eye is beyond healing, why the eye was presumed different from other organs of the body that use the natural physical response of healing to recover function if a person strives to set up the right conditions for healing. Bates’ book outlines those conditions and describes clearly how to enhance them.

If you’re lucky enough to be over the age of thirty, you may have experienced a change in your eyesight. It’s common that even by then, the eyes begin to age. The eyes are controlled by muscles in many different ways. These muscles can lose tone just like any other muscle in the body. Vision problems can result.

Don’t practice mistakes. Glasses are designed to adjust a refractive error of a certain degree. In order for a person to see clearly through them, the eyes actually must return to the error in the first place. Glasses don’t work unless the eye is seeing wrongly first. Bates’ realized that errors of focus are not constant. The eye changes. The moment one puts on eyeglasses, though, the eye has to automatically adjust to an incorrect position, an unnatural position of focus to accommodate to the glass lens. So, if you woke up in the morning and your eyes worked properly at the moment you arose, you’d be making your eye muscles put your eyes out of focus the minute you put your glasses on! At the least, you would be reinforcing something undesirable: poor eye focus.

Bates reasoned that much like a cardiovascular system can improve with regular exercise, eyesight can also. His book is designed as a self-help system so the intervention of a specialist isn’t even required.

Note: By no means will Bate’s method solve all eyesight problems. But it has been shown to help correct some focus problems. Some of Bates’ early suggestions are quite controversial (sun-staring) but the modern rewrites of his books have filtered out much of the controversial.

Seeing with feeling. Bates believed that most vision problems are the result of two primary factors: mental strain and misuse of the muscles that shape the eye for focus. The sets of muscles that control focus and eye movement are referred to as the extrinsic muscles of the eye. Like any muscle, they are affected by stress, tension and fatigue. They can also be trained by misuse and retrained by simple exercises. Good sight is the result of a relaxed state of mind and body.

The first key in the Bates Method is learning to relax the muscle. Bates believed that correct seeing is a natural ability and should be done with ease. It is a mental attitude that serves to relax at first. In Bates’ words, “The eye with normal sight never tries to see.”

Bates’ book to improve eyesight is available on Amazon.com.

Heartland Healing is a metaphysically based polemic describing alternatives to conventional methods of healing the body, mind and planet. It is provided as information and entertainment, certainly not medical advice. Important to remember and pass on to others: for a weekly dose of Heartland Healing, visit HeartlandHealing.com.
2020.09.22