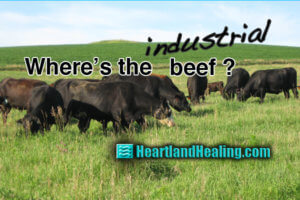 With that much meat going into our mouths, producing it must be a pretty slick operation. I mean, that’s a lot of meat. The only way it can be raised, fattened, slaughtered, packaged and marketed to hungry Americans is by a big, powerful industry. And that it is. But most folks don’t give a thought to how those meat products are brought to market.

I’ve been using the term “industrial meat” to describe the kind of meat products Americans typically and blithely buy in our supermarkets, fast food outlets and restaurants. Recently, a longtime friend of mine asked me, “What do you mean, ‘industrial meat’”? Good question and food for thought. I should explain myself.

When it comes to how beef gets to market, the bucolic image most people have is of a cow running free in the pasture in the warm sun, grazing on green grass, watered and cared for. And then, after a long, happy life, that cow has just one bad day when he’s gathered up with a bunch of his friends and goes on a ride down the road. We even talk ourselves into believing that our livestock animals can be “humanely raised” though I don’t find the idea of treating an animal with care and respect just so that on that “one bad day” we kill it. (Like, “We’re taking good care of you and we really do care but today we’re going to kill you and eat you.” Doesn’t qualify as “humane” to me.) In any case, that pastoral portrayal is nowhere near how most meat is produced. No. And here’s the short story.

Just to generalize, calves are born in late winter or early spring and can be born to a cow in a confinement barn or in pasture. The calf will wean and then be turned out to pasture because, after all, letting a cow eat grass is a good idea since all ruminant animals are designed to forage on grass and never to eat grain or corn. Sometimes that calf is separated immediately from the mother cow and sometimes stays in confinement instead of pasture.

Time is money. In order to produce the massive amount of beef that Americans crave, pasture feeding won’t get the job done. Taking a cow from a birth weight of 80 pounds to a market weight of 1200 pounds could take about three years or so in the best case feeding just on grass. So the industry built feedlots that take over after the cows are sold at auction after only six months or so. Life in a feedlot is a lot different. That cow will never see pasture again. Instead, he stands in his own manure and that of 20,000 or so other cows for the next few months as his weight balloons on a diet of corn, distillers’ grain (the dregs of what’s left of corn after it’s processed into ethanol) and other unusual feed rations all designed to get that cow as beefy as it can and in as short a time as possible. He’s on schedule to go to the slaughterhouse in only 12 months of life.

Fast facts. Cows (and all ruminant animals) are designed by nature to eat grass and forage. They have multiple stomachs called rumens that can turn cellulose and fiber into protein and meat. But corn can kill them. It’s not good for them and, it turns out, feeding them corn is not good for us. But since corn and its derivatives are chock full of sugar, starch and carbs, cows gain weight fast. And like humans who eat something that doesn’t agree with them, cows get indigestion. Indigestion that can kill. So in a feedlot, our happy cow gets a daily dose of antacid, usually something called Rumensin. And since “you are what you eat,” the nutritional profile of the meat that cow now produces is changed quite a bit.

Once the cow reaches market weight at about 12 months or so, off it goes to a massive slaughterhouse covering a few square miles, processing thousands and thousands of cattle a day. With tons of manure and intestines splashed about on the killing floor and throughout, you can only imagine how difficult it is to keep a place like that clean. You can only imagine how many hands of how many people handle that meat.

After the meat is mechanically separated from the carcass, anything that is left is shipped to another plant, usually in another state, where the dregs of those thousands of animals are processed into separated protein and fat. All that is combined with other scraps from hundreds of animals from dozens of plants and states and even countries to go into that package of hamburger you can get at the store.

The steaks, roasts and ribs of those animals go off to packaging and are usually put in a sealed “modified atmosphere package” that contains carbon monoxide to keep the meat looking fresh on the supermarket shelf for days and days… and days.

Contrast. The beef I buy comes from one of three or so farmers I know personally within a hundred miles or so of where I live. The cows never eat anything other than grass, never live anywhere other than pasture and sheltering trees. Never have to get antacids. The meat has a natural nutritional profile that includes omega-3 and omega-6 long chain fatty acids. They are allowed to grow at their natural rate and when they reach market weight they are taken in small numbers to one of the few local USDA approved processing plants in Nebraska towns like Table Rock, Diller or Neligh. The cow that goes in is the meat that comes out. The burger is made from meat and never mixed with meat from another herd. Steaks and roasts and whole cuts are aged, packaged and frozen and if I were to count, I’d find maybe two people who have handled the meat before it gets to my freezer. The shorter the food chain, the safer the food chain.

And cluck. The poultry in my freezer comes to me even more directly. The chickens are pasture raised, never cooped up with thousands of other sick chicks and they are processed right at the farm, delivered to me frozen.

And, surprise! Mostly because these farmers who raise grass fed, grass finished livestock are not indentured to the industrial format and charges, never have to pay auction fees or corporate costs, the prices are competitive. It takes a little bit of planning and interest to step outside the industrial circus but the results are worth it. Eat less meat but eat better meat.

Note: Some unscrupulous producers will call beef “grass fed” because after all, all cattle eat grass at some point in their life, even if they end up going to corn at an industrial processor later. Once a cow starts eating corn, within hours the body chemistry changes and the nutritional profile can alter significantly. Make sure your “grass fed” beef is “grass finished” and has never eaten corn.

Heartland Healing is a metaphysically based polemic describing alternatives to conventional methods of healing the body, mind and planet. It is provided as information and entertainment, certainly not medical advice. Important to remember and pass on to others: for a weekly dose of Heartland Healing, visit HeartlandHealing.com.
2019.10.22