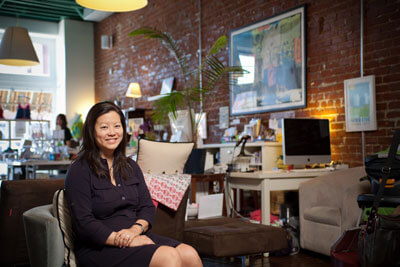 Read More: Kim helps locals realize NYC dream Alice Kim’s story of leaving New York City for Omaha has gotten much play. In 2007, the then- InStyle magazine accessories editor acted on her admittedly “weird,” long-held preoccupation with Omaha by moving here and opening the Old Market lifestyles boutique, Trocadero. “My store is in some ways InStyle come to life,” she says. Her experience recommending the best of this or that gives Trocadero customers the benefit of her branded, expert, insider’s advice.  “I have that kind of finger on the pulse of what people want.” Still, her store has struggled amid the recession and conservative Midwest buying habits that don’t mesh with her somewhat frivolous merchandise. Cognoscenti, however, regard this Big Apple sophisticate as a style maven and tastemaker. Her exclusive, discriminating suggestions for just the right hand bag, pair of shoes or home decor item is heeded. She cops to not being a salesperson but says, “I can always convince somebody that this is a great something or other.” Her spin, she says, goes something like: “’It’s a total New York brand, it’s not sold everywhere, it’s at a great price point.’ And all of a sudden there’s a story and they’re like, Really? And they buy it. “It’s like sharing industry secrets,” she says. “I feel I have a unique angle, which is really telling people about the stuff that we as editors love.” Everything she sells or endorses, she says, “I stand by.” If her style sensibility were a tag line she says it would be “practically perfect,” adding, “It’s always going to be practical and it’s going to close to darn perfect.” She has the professional chops and personal élan to articulate her discerning aesthetic without sounding smug, whether selecting things to sell in her shop or for her own wardrobe or excising the dull dross from a client’s closet. “I feel very confident in my skills,” she says over sushi at Hiro 88 West. “I’ve always known how to style.  I think a lot of it is innate. It’s just having the eye. It’s like being a good editor. But, of course, I’ve been trained. When I arrived in New York, from Pittsburgh, in 1992, I certainly was not a fashion diva then and I certainly didn’t look the part. I was doughty.” She’s a long way from doughty today, though she felt that way while pregnant last year with her first child. Since the birth of her daughter Annabel she’s pined to retire her formless maternity clothes and return to some chic wear, such as the classic black dress she wore at lunch, accented by pearls. “I don’t want to look messy anymore,” she says. Kim is marrying Annabel’s father, entrepreneur Adrian Blake, this summer. She’s also step-mom to his two children as the two households recently merged. Even before her pregnancy, Kim says she’d gotten lazy about her look and gained weight thanks to Omaha’s more sedentary lifestyle. Actually, she says her casual phase began near the burned-out close of her frenetic New York career.  “There were times when towards the end of my working days I just didn’t care anymore. I was just so busy. I’d wear flip flops because I was hoofing it all the time, walking from the garment district back to the office with bags of accessories. I wasn’t going to teeter in high heels. “I was on the New York fashionista diet [champagne and finger food[. I was definitely much thinner when I lived in New York.” Then there were those times, she says, “when I wanted to get dressed up, so then I’d wear a beautiful jacket with a dress and heels. It really depended on my day. If I knew I was going to be in the office all day then I would wear something nicer because I wouldn’t have to be schlepping around town for shoots and samples. “When I first started the store [Trocadero],” she says, “I wanted to look nice — to be representative of fashion in New York in Omaha. I probably worked harder (at it) and then gradually just became more casual.” For a year she bought her clothes at Target as a concession to mommy practicalities. Besides, she says, good style “doesn’t have to be super expensive.” Balancing being a new mom and fashionista at 41 means remaking herself, so she’s back to shopping at Von Maur to outfit herself more appropriately. “I’m in my 40s — I really can’t keep dressing like a teenager. It’s just having to embrace that I’m an adult. I feel better now because I have grown-up clothes. I can look equally fine walking to the kids’ school or coming to lunch here or going to the supermarket. “My thing is cardigans.” Her lifetime hunt for the perfect black leather motorcycle jacket continues. Making one’s self or home polished, she says, is all about investing in a few high quality things and making them pop with the right accessories. “I think my house reflects my store, which is always about the accessories, the details, the accent pieces. Like I have this plain, white, Danish-modern couch. What makes it interesting is the hand-painted, embroidered pillows on it.” When it comes to clothes, she says as clichéd as it sounds, “you start with a little black dress and the way you accessorize it is what gives it its style.” It’s about transformation. Like opting to live out her version of the American Dream in Omaha. After a whirlwind start, she began doubting her life makeover, but now that she’s found her man and become a mother, she says, “I feel content.”  Her magnificent obsession is the subject of her blog,” Postcards from Omaha,” and a book she hopes to finish soon. Trocadero is located at 1208 1/2 Howard St. in the Old Market. For more information call 402.934.8389 or visit shoptrocadero.com.