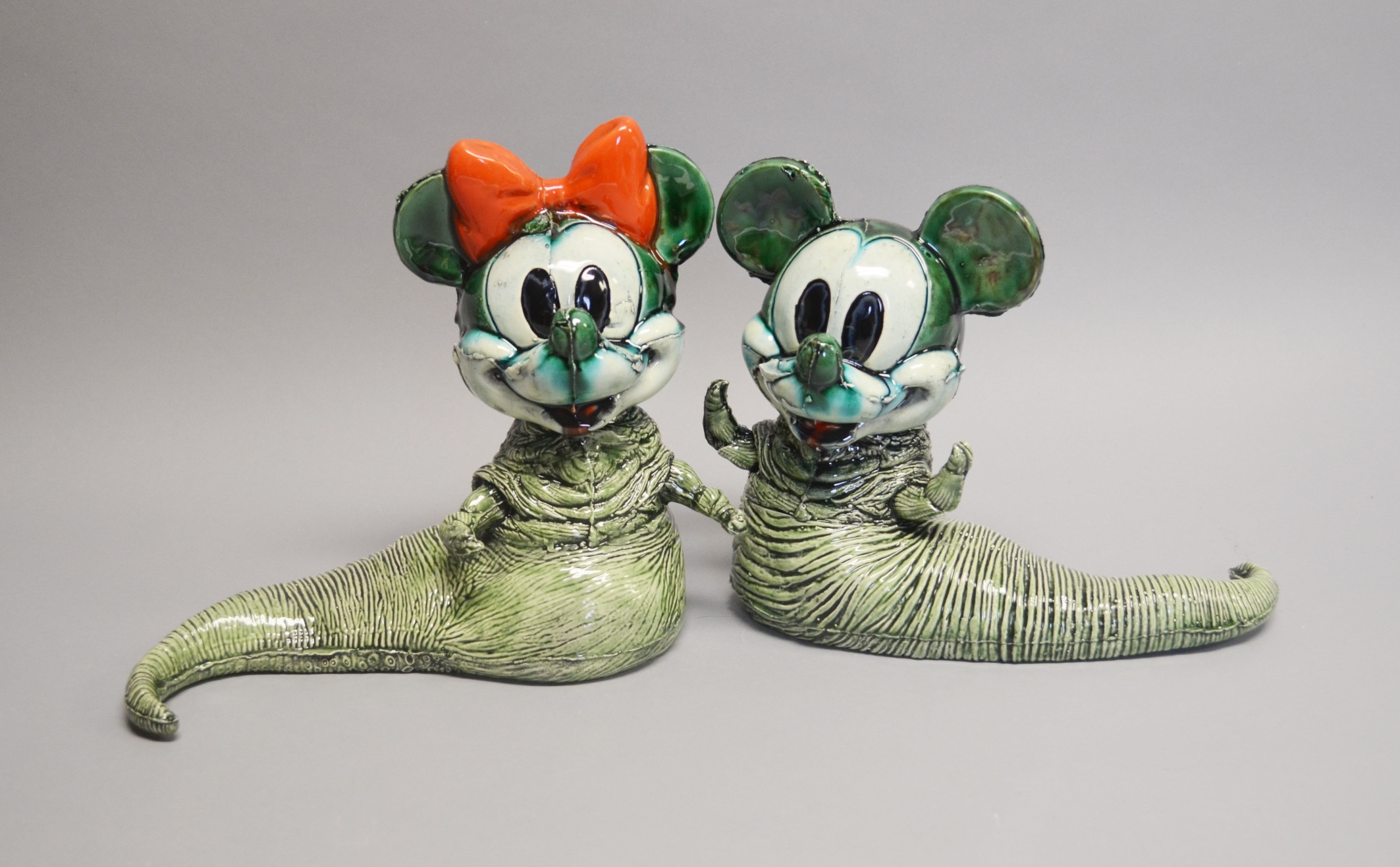 Hardwired into the American psyche, superheroes and cartoon characters have played across movie and television screens for nearly a century. Who of us hasn’t dreamt of possessing superpowers to defy a bully, or gain the esteem of others? Despite the magic of superpowers, the subliminal stereotypes embedded in the superhero characters of video history have had far-reaching effects on our societal myths.

Amalgamations, a solo exhibit of clay hybrid characters by painter and sculptor Bart Vargas, runs through January 25 at the Fred Simon Gallery. His brightly colored mashups of the visages and bodies of iconic heroes and comic characters star in a show that first and foremost entertains, but then delivers a KAPOW! that especially touches on issues of gender stereotypes and corporate greed.

If the show comes down heavy on any particular subliminal message, it’s the female stereotype. For example, the Power Puff girls, a cartoon characters from the ‘80’s, were kindergarten-aged products of their father’s lab experiment. His recipe of “sugar, spice and everything nice” was guaranteed to cook up perfect little girls.

However, during the process, as it happens in most sci-fi plots, Chemical X falls into the mix and the girls emerge with superpowers of flight, speed, strength, invisibility and more. Their outfits, dresses that match their eye color, white tights and black Mary Janes, enforce the stereotype.

Vargas defies this typecasting by affixing Power Puff heads on stormtrooper bodies. Even better, he replaces the Mary Janes with kickass galactic boots transforming them into women of strength in the quest for interstellar peace. 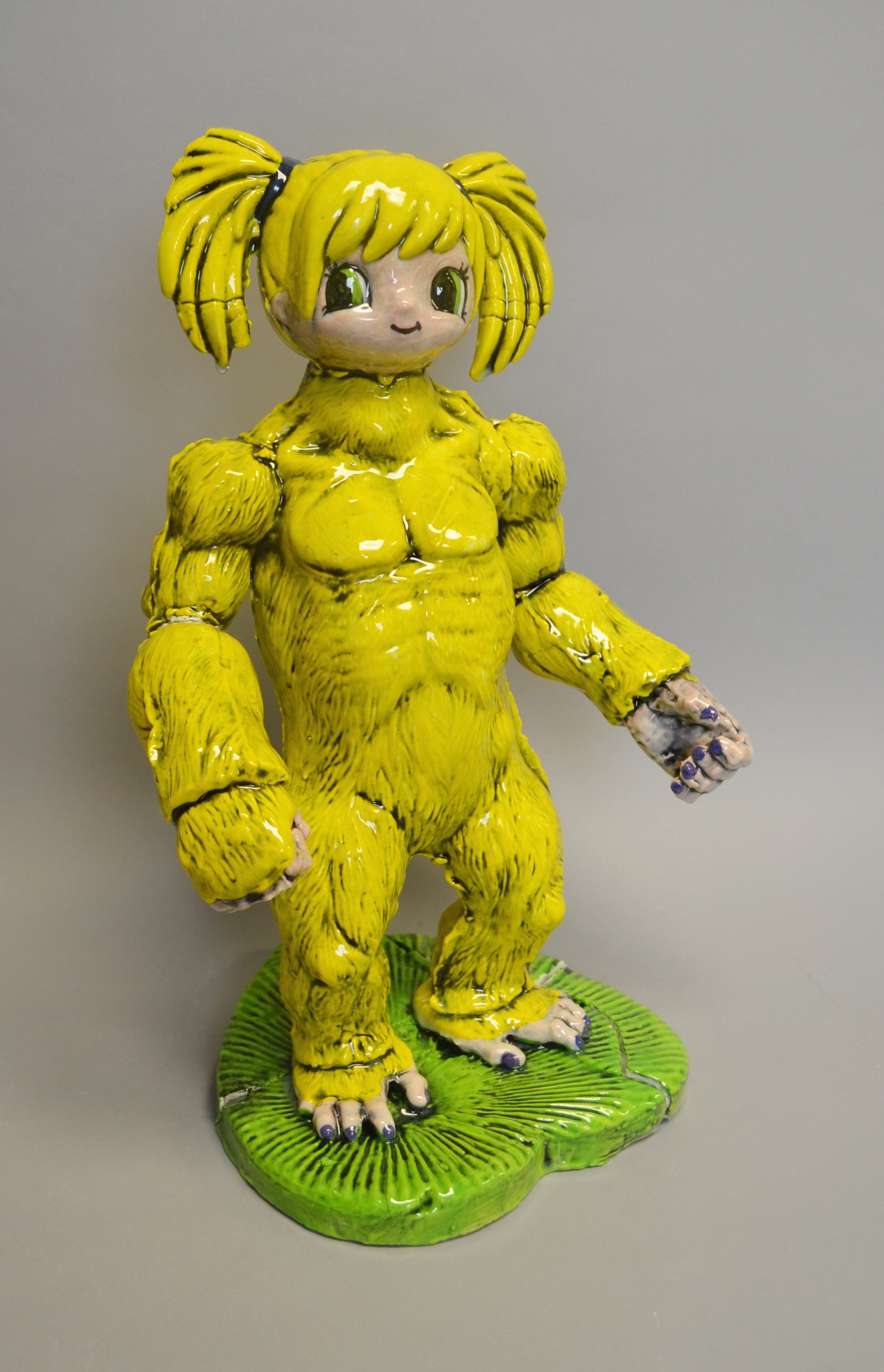 “Gorilla Girl,” glazed in happy-face yellow, juxtaposes a young girl’s sweet face, ponytails and bangs, atop a hulking gorilla body. Does it suggest the potential of a well-adjusted young lady with much to offer? Or, does it throw out an allusion to contemporary women artists, Guerilla Girls, who protest sexist and racist policies? Even as viewers may smile, they can join the discussion.

The most iconic cartoon characters are pitching more than laughs in this show. In “If Corporations Were Galaxies” Mickey and Minnie Mouse sit atop Jabba, the Hutt, bodies. With recent corporate takeovers in the entertainment industry, questions arise about the long term identities of our comedic icons.

Vargas did not fail to include more current mix-ups: not only Sponge Bob as a Pride Trooper, decked out in rainbow colors, but also, Bob’s cross-eyed head on the powerful body of Wonder Woman. I wonder how Wonder Woman likes that arrangement. Elmo gets in the act, too, in eight different iterations as colorful dancers in a Pride Circle.

Vargas’s reputation as an environmental artist persists as he continues to recycle and repurpose, but he has replaced salvaged wood, paint and plastics with these new slip cast ceramics, molded on the bones of thrift shop toys. But the transition to clay figures did not come easily. 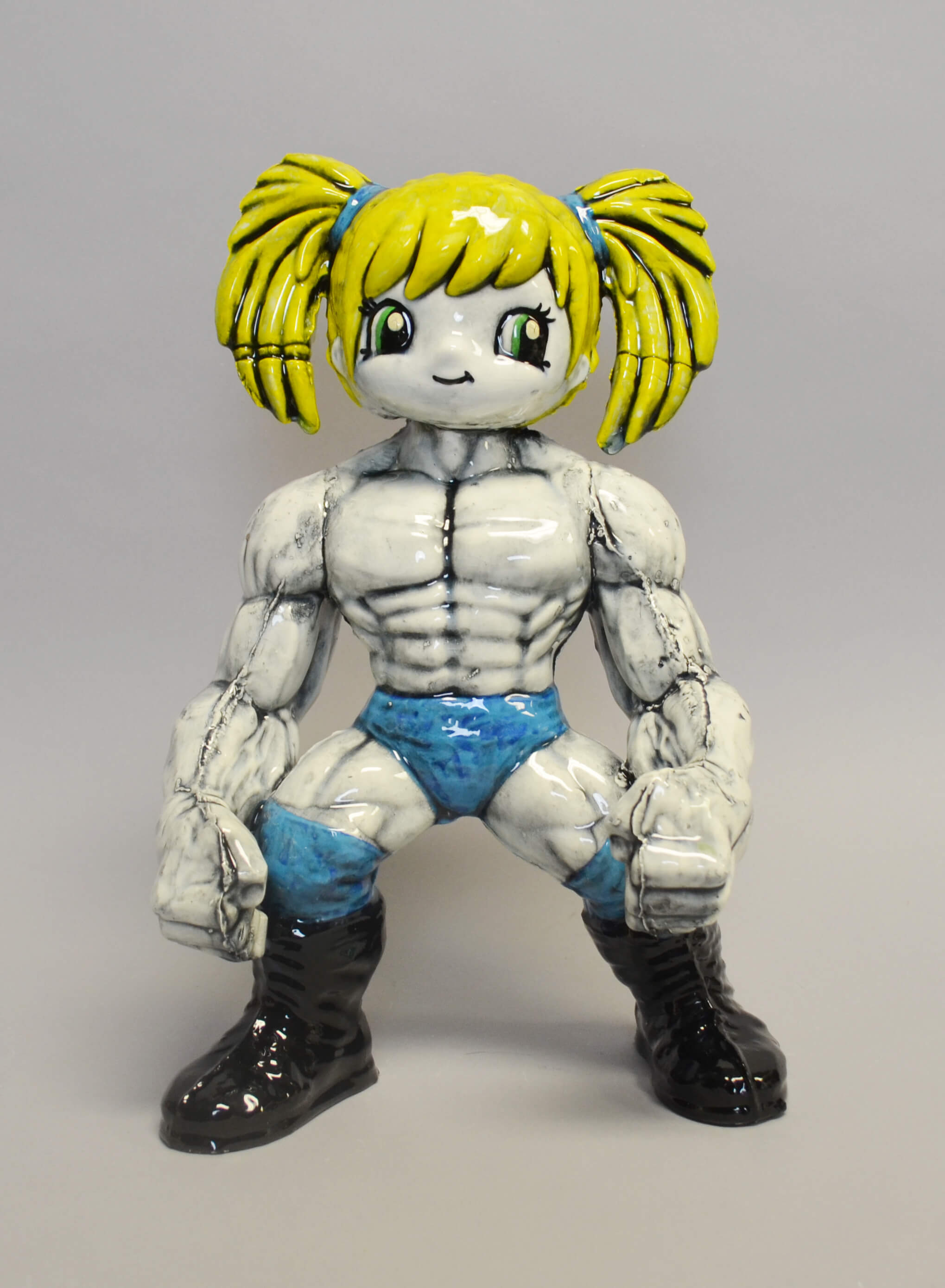 Although Vargas had worked in clay in his undergraduate days, he had not explored clay with any seriousness for sculpting until a couple of years ago. In hopes of developing creatures with enhanced durability and flexibility, Vargas thought he could solve his problem with molded ceramic figures.

Armed with a class in ceramic slip casting at UNO, Vargas began a time and labor intensive process to master casting objects in plaster molds. Imagine a sped-up YouTube video: Create mold using plaster of Paris. Press clay into mold. When clay is semi-dry, delicately remove it from mold without fracturing limbs in the process. Next, gently scrape off excess clay, smooth, then allow piece to dry.

After his class at UNO ended, Vargas needed more materials and somewhere to fire his clay. Enter Ray Agosta and his wife, LaVerne, at Agosta Ceramics. When Vargas arrived at Agosta’s with the delicate wonder woman arms broken at the wrists and other junctures, Ray would laugh, shake his head, and warn that slipcasting such thin ware was just ill-advised. But Agosta saw a need and provided the mentorship Vargas lacked.

Other techniques came from Jamie Burmeister, a clay artist who also works with sculpted clay figures, often in miniature. Vargas dedicates the show to the Agostas, now deceased, and recognizes the kindness of fellow artists Burmeister, Anne Burton, Jess Benjamin, and Katelyn Farneth in their support for this exhibit.

While graffiti artists have long appropriated characters from the comic and superheroes world, Vargas transforms them into 3-D characters, challenging their historic two-dimensional stereotypes and allows us to see them as fully rounded, as they project new super powers of influence into the future.