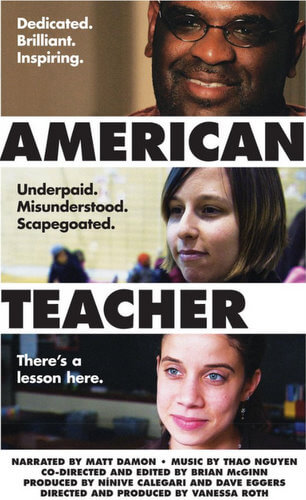 Four years was a long time to work on a film. Ninive Calegari, author of best selling Teachers Have It Easy and producer of the resultant movie, “American Teacher” explains,  “We were able to start filming right away. But the main reason the project took so long was that most of the time we had only $232 in the bank.”

Lack of funding and long hours aren’t new to Ninive Calegari. She spent ten years teaching in charter schools and large high schools. Calegari found that even with a master’s degree from Harvard’s Graduate School of Education, teachers were undervalued when it came to pay day. Teachers work extra jobs to subsidize their teaching salaries.

With narration by Matt Damon, Academy Award winning director Vanessa Roth (“Freeheld”), presents the lives of four teachers and explores the perspective from the front of the classroom.

In fact, the long days and low pay in blackboard jungle generates a higher burnout rate than almost every other profession, leading to 46% of US teachers leaving the profession by their fifth year of chalk dust, lesson plans, and grading student homework papers. Of the 3.2 million current US teachers, 1.8 million of them will be eligible to retire in the next decade.

It sounds like a story math problem- if nearly half of the teachers leave shortly after starting to teach, and more than half retiring in 10 years, who will be left to teach after the thundering exodus?

“I wanted to address that question,” relates Calegari. “I am concerned about the future of our economy if we continue to undervalue educators. There needs to be a change in our culture about how we value teachers. It’s time to improve salaries and conditions for teachers.”

American Teacher will show on Wednesday, February 22 and Thursday February 23rd at 7 PM at Film Streams at 7 PM. Immediately after the film, Nancy Edick, Dean of the College of Education at UNO, will moderate a panel discussion which includes Maddie Fennel, 2007 Nebraska Teacher of the Year.

Response to the screening has been extraordinary and Wednesday’s event is sold out. Contact Film Streams at www.filmstreams.org to register for the encore event on February 23rd. You can also visit the box office inside Film Streams, located at 1340 Mike Fahey St in Omaha or email Maggie Wood at Maggie@filmstreams.org.