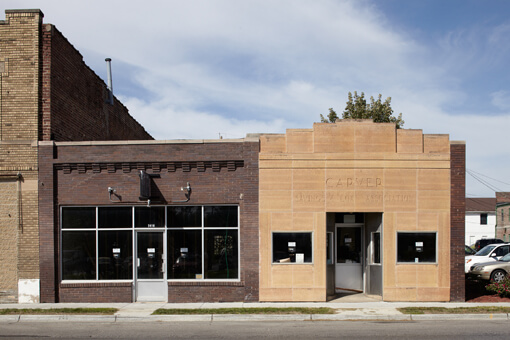 A once prominent but long vacant building in Omaha’s African-American hub is now reborn thanks to catalysts bridging the divide between need and opportunity.

The endeavor is the brainchild of Chicago-based artist-developer Theaster Gates, who partnered with his own Rebuild Foundation and the Bemis Center for Contemporary Arts in Omaha. Artist-craftsman Sean R. Ward led the construction. Volunteers from North High, Impact One and the FACT design lab from the University of Nebraska-Lincoln assisted.

Gates repurposes vacant inner city spaces for new uses that support artists and engage community. He was brought to Omaha by the Bemis. The Carver Bank idea took shape after Town Hall listening sessions with stakeholders and city officials.

“On one level the city has a problem with vacant buildings and on another level there’s this tremendous need for space artists articulated,” says Gates.

“There’s so many places where capital has left but value still exists. I think North Omaha is such a place. If you look hard you find incredibly talented, creative visionary young artists that bring a lot of value to their surroundings but have no institutional support. We can support artists in a very focused and strategic way.”

Carver program coordinator Jessica Scheuerman says the project “discovers and recognizes emerging artists who maybe don’t have a platform or a space to present or produce their work.”

The venue’s seen as a harbinger of positive changes for a struggling inner city district poised for redevelopment. The hope is that Carver is a magnet for visitors.

The 24th and Lake intersection is ground zero for a projected arts-culture district. Players in the effort gathered for an Oct. 16 press conference at the adjacent Loves Jazz & Arts Center to announce the city’s $100,000 Our Town grant from the National Endowment for the Arts. Some of the monies support Carver and LJAC programming.

Carver’s the latest building block in what the Empowerment Network, the Greater Omaha Chamber of Commerce, the city and others envision as a revitalized 24th and Lake corridor. Loves Jazz is the anchor. The Union for Contemporary Art and its own artists residency program is a recent addition. The proposed centerpiece is Festival Square. Plans call for new Great Plains Black History Museum and John Beasley Theater facilities.

Gates described his role as “a catalyst or flux to help move things forward and to help deliver a product or opportunity,” adding, “We had to be really sensitive to the fact people made their own plans already for cultural life in the neighborhood and those plans have been approved.” He says he applied to Omaha “the body of knowledge we’ve gained from restoring buildings in Chicago and St. Louis” and a track record for getting buildings occupied and busy.

“Our mission is to be open, to be a beacon,” says Scheuerman. “We’re going to be a space people can reliably come to, where they can encounter the arts, get food from Big Mama’s and really count on us to be part of the social fabric of the neighborhood.

“The (artist) residents will have 24/7 access to their studios, so they’re going to be ambassadors of this project. They’re going to exhibit their work and be part of the community. We’re going to have programming that reflects and challenges and stretches the neighborhood. We’ll bring other elements of Omaha art here to have those cultural exchanges you wouldn’t necessarily imagine taking place on 24th and Lake.”

Gates says it’s all a result of identifying artists who need work spaces with small businesses wanting to grow into them. It required artists and the Bemis and the Empowerment Network and the Omaha Planning Commission to make this one modest intervention happen. But this modest intervention has the capacity to do all this other stuff.” He says he simply uncovered hidden potential and forged new partnerships.

“Sometimes I feel like the work I do is shining a light on the good things already there. It’s really about framing things. Then after a while the work doesn’t need me to do any light shining anymore. Other people will shine the light.  I just kind of rang the alarm. Now I think the only thing I have to offer is encouragement.”

The linchpin for the whole project, Gates says, was getting Big Mama’s on board.

“I think having Big Mama’s on the block is going to be huge. People come from all over the city to Big Mama’s. I can envision a lot of people being present who are not currently present on 24th and Lake. I think people might hang out and hanging out is super cool and leads to new friendships and to people to getting hungry and needing to use the bathroom and wanting to know what’s happening next door to the thing they came to.

“People are going to be curious about what’s happening at the Union and Loves Jazz and Carver. People who give to Bemis will have other places to land their generosity.”

He can imagine a larger impact that “will effectively model what culture looks like in North Omaha and that will create a desire for other people to model cultural activity there, which is the part that feels like catalytic work.”

He and McGraw feel Carver adds another element to a growing mix of arts attractions to drive traffic to North O.

“What I often find is that people don’t come to a place because they ain’t been invited or they don’t know something’s happening in that place,” says Gates. “Having these spaces that will have the occasion for people to come – I’m really excited about what that does.”

“I think the synergies are there and all these activities will be stronger in concert with one another,” McGraw says.

Gates believes all the organizations will benefit from working together informally or via a planned North Omaha Arts Alliance. He and Scheuerman say the Bemis provides strong backing. “The Bemis has got reach, history, reputation,” says Scheuerman. “It’s a huge benefit to have that type of infrastructure.”

McGraw expects Carver and its companion attractions are just the start:

“It’s taken a long time to get there but maybe that is a metaphor or analogy to the neighborhood on a larger scale. There has been a lot of small conversations happening and a big vision produced and now is a moment when the city is starting to see aspects of that vision come to life in a tangible and exciting way. When the pieces start to come together in a coordinated way you really begin to see there are huge possibilities within this neighborhood. It’s very exciting for us to be centered around artists and culture, not even so much in a historic or nostalgic way, but in a contemporary and real time way.”

Tour the Carver at upcoming open houses in December. For details, visit www.bemiscenter.org/carverbank.