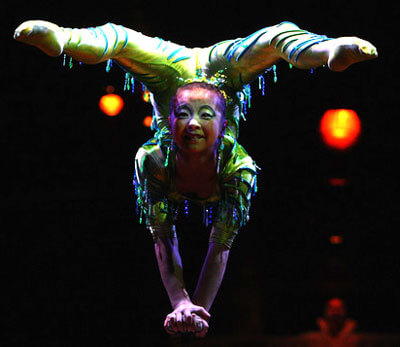 3 UP, 3 DOWN April 13-17 Cirque du Soleil presents “Dralion” Mid-America Center, One Arena Way, Council Bluffs April 13-15 at 7:30 p.m., April 16 at 3:30 and 7:30 p.m., April 17 at 1 and 5 p.m., $38-$98, ticketmaster.com The high-flying acrobatics of Cirque du Soleil will be back in the Omaha metro beginning next Wednesday, April 13, at the Mid-America Center in Council Bluffs. There will be seven chances in all to catch a performance; the last will be Sunday at 5 p.m. This time around, the Cirque show is called “Dralion” (pronounced “Dra-lee-on”) and it carries the theme of the “fusion of ancient Chinese circus tradition and the avant-garde approach of Cirque du Soleil.” Just what the hell does that mean? We caught up with Cirque publicist Julie Demarais for details on that and more to preview “Dralion.” The tagline for “Dralion” is “the fusion of ancient Chinese circus tradition and the avant-garde approach of Cirque du Soleil.” Explain that in laymen’s terms. The show was originally created by Guy Caron, who has a lot of interest in the Chinese acrobatic tradition and a passion for Chinese culture. When Guy Carone was approached to direct a new touring show for Cirque he immediately had the idea of immersing himself in Chinese culture by going to china to find the latest acts and the best talent among China’s acrobats. After that he searched the world for the latest acts being performed, and in simple terms this marked the commencement of the creation of “Dralion.” Almost two years and a lot of creation time later, the show premiered in 1999 under Big Top in Montreal, Canada. Since this time “Dralion” has been seen and loved by more than 8 Million people worldwide. In 2010 the show went through a re-creation/re-staging to enable this vibrant creation to be performed in Arena environments. What other cultures have you covered and why was the Chinese circus tradition a good fit for Cirque du Soleil? Cirque, prior to the creation of “Dralion,” already had a good working relationship with the Chinese Performing Arts Accademy, which is the central government agency for everything to do with acrobatics in China. When the idea of creating “Dralion” was brought to them they were instantly pleased with the concept. Within the show you can see Indian influences, African, Italian, French, Spanish, Arabian — just to mention a few. This show truly is quite a melting pot of culture. “Dralion’s” artists include representatives from 14 different countries. In effect we feel sometimes as if we have our own little “League of Nations” on tour. At this point, just about everybody in the world has heard the name “Cirque du Soleil.” But not everybody’s gone out to see it. For those who haven’t, explain what they’ll get out of a Cirque show in 100 words or less. I want to start by saying that above everything else people will see a world-class performance when they come to “Dralion.” I love that we are able to bring the world of Cirque du Soleil to so many different audiences. With so much negativity in the world this show is one of those life changing experiences that we hope touch the hearts and minds of the people that come to see it. As the audience enters our world they enter a world of escape and a place where ordinary people do extraordinary things. “Dralion” is a very colorful show, the costumes, lighting, live music, acrobats, funny clowns, beautiful aerialist, dancers and singers are amazing. The true reward for us is the audience, at the end of the show, as they rise to their feet, smiling, cheering and applauding for the two hours of the action packed performance they’ve just experienced.