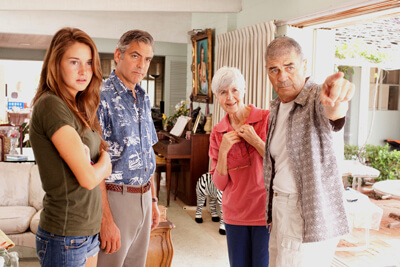 In his well-reviewed new film The Descendants Alexander Payne reframes the Hawaiian idyll as gritty American terrain where history and culture intersect with human aspirations and failings.

The festival favorite follows an island clan set askew by trauma, infidelity, greed and legacy. Feeling the weight of it all is reluctant land baron Matt King (George Clooney), who tries salvaging what’s left of his family and life by practicing forgiveness and finally growing up. Clooney’s called the film a coming-of-age tale for his 50-year old character and his estranged 17-year-old daughter, Alexandra, played by Shailene Woodley.

For this project that’s put Payne back in the game after a seven-year feature hiatus he reunited with producer Jim Burke, who goes back with him to Election, and cinematographer Phedon Papamichael, who lensed Sideways. Payne and Papamichael use the Hawaii setting’s natural beauty to inform its prevailing island insouciance and to counterpoint its hard realities. Burke is a partner with Payne and his frequent screenwriting collaborator Jim Taylor in Ad Hominem Enterprises, which produced Descendants. Woodley worked with Payne for the first time on the new film.

“It’s all about casting,” Payne says of getting kids’ parts right. “Shailene is a total pro. She’s on a TV show (The Secret Life of the American Teenager). She’s going places. She’s excellent. Amara, who turned 10 while we were shooting, had never been in anything. She’s just a complete natural.”

Payne collaborated once again with his longtime casting director, John Jackson (an Omahan).

Kaui Hart Hemmings, a Hawaii native and resident who authored the novel the film’s based on, closely vetted the script at Payne’s request to ensure authenticity. She was on set for the duration. She praises his “attention to the minutiae of Hawaiian life, his humor and restraint, his casting decisions,” adding that the adaptation “brings Hawaii to the big screen — something’s that’s never been done before in an authentic way.”

Burke says Payne’s deft sardonic touch has, if anything, ripened.

“My feeling is Alexander has made his finest film. It’s sort of a maturation of filmmaker that is actually beautiful to see. Tonally, it still has many of the hallmarks of Alexander’s previous work but it is a bit more emotionally penetrating. I think the stakes are sort of serious in this picture.”

The stakes are high for Payne, too, after being away so long and failing to get his Downsizing project made. He needed this.

“Well, I mean from a straight kind of careerist point of view it’s important,” says Burke, “but that’s not really what he is, he’s more of an auteur. He’s going to make movies when he’s ready to do that and when he’s ready to work on something he feels a connection to, and sometimes that takes awhile.”

Woodley experienced the warm, laid-back set Payne’s famous for. “He really gives you the freedom to express in whatever way you want to,” she says, “and you don’t feel weird being vulnerable around him because he creates such an accepting and open environment.” She says Clooney was equally comfortable to work with and she now regards the two men as her industry “mentors.”

Papamichael says Payne betrayed extra “nervousness” at the start but soon fell into a rhythm. Despite having worked only once before they quickly hit their stride.

“It was pretty instant. We were able to dive right into it. On Sideways it took about 10 days for me to figure out the way he sees things and understands coverage. Sometimes the camera is not as intimate as I’d like to place it. He’s very much an observer — he likes to stay a little wider, a little distant, and I pushed it a little bit and we got in tighter.

“We’re still exploring our aesthetic as our collaboration continues. It’s all very subjective, all very personal. Everybody sees things a little differently.”

Each has a propensity for stripped-down, naturalistic, location-driven shoots that are a function of their low budget roots.

“I didn’t come through the system of operators and gaffers, it was always do-it-yourself, use natural light, move quickly, keep it as simple as possible, be as unobtrusive as possible, so it was a good fit,” says Papamichael. “On Sideways we tried not letting the camera-the craft get in the way of the story, and that was the approach to The Descendants as well. Both are picturesque settings you put these conflicted, troubled lives into.

“What was important to us was to show a range of Hawaiian society. It’s not just what’s presented to people through the tourist boards. I mean, it has traffic jams, it has poverty. There’s a great discrepancy between wealth and locals living in slums along the beach, where these tent towns go on for miles. It was important for us to show people who live in Hawaii are Americans like everywhere else. They have all the same problems.”

“It was important to show the psychology of the land and the strength of nature as Matt goes through the conflict he’s dealing with and feels the healing power and purity of nature. It helps him sort of resolve certain things he’s torn about and he gains respect for recognizing those values. There’s so many layers in it.”

Payne spent months immersing himself in all things Hawaii.

“It was important for the photography not to be flashy, but to feel real,” Papamichael says. “Alexander has this saying: ‘Keep the banality of things.’ So we don’t touch anything on locations.”

The joint where one of King’s cousins, played by Beau Bridges, holds court is a genuine bar and the extras glimpsed there its actual denizens.

“Even when we shoot somebody driving somewhere we shoot on the road the character would have to take. It’s not like, ‘Oh, let’s do some drive-bys on the north shore because it’s really pretty.’ It extends to casting. Alexander instinctively finds people that feel real.

“All that authenticity audiences do feel somehow. It’s not manipulative, it’s not some artificial world we’re creating. I think that’s why his stories, other than the brilliant writing, are so effective. They are real.”

He says the two of them work intuitively, starting in pre-production.

“We don’t really shot list or storyboard. What we do is we watch movies we feel are more or less relevant to what we’re doing. We’re drinking wine and eating pasta and showing each other films.”

For Descendants, he says, “I showed him Walkabout because it deals with nature and how society and humanity are in conflict with that. We always end up watching some Hal Ashby or Italian movie (at Payne’s insistence).”

This show-and-tell sparks a running conversation.

“It’s nothing specific, nothing designed. We don’t analyze it. We just get a sense for the tone or the framing. We do go scout and pick locations together. We do talk a little bit about color palette when we’re dealing with (production designer) Jane Stewart, but it’s very nontechnical — the whole thing.

“He’s open, he listens to people. Sometimes he’s looking more for help, sometimes less. He has a very particular, very unique way of seeing things in the way he directs, the way he cuts. He takes a long time to cut his movies. He really fine tunes and finds the little moments with (editor) Kevin Tent. It’s very precise in a way.”

That precision extends to Payne’s scripts.

He says even dialogue that sounds improvised is scripted.

“It’s exactly the way it’s written, word for word, there’s no veering off into any ad-libbing.”

Papamichael and Payne are slated to work together again soon. They’ve done scouts and made tests for Nebraska, a black-and-white, father-son road pic for Paramount to be shot in-state next spring. Word has it Payne’s trying to seduce Oscar-winner Gene Hackman out of retirement to play the derelict father who enlists his estranged son in driving him to claim a supposed winning lottery ticket.

Payne is doing a Q & A after the 5 p.m. show and introducing the 8:30 p.m. show. A Waikiki Party follows at Slowdown. For screening and ticket info visit www.filmstreams.org.