Greetings from the center of the geek universe, San Diego Comic-Con, a black hole of color and light threatening to collapse in on itself.

Arriving late on Wednesday, we skipped opening night where the exhibition hall throws open their gates and the feeding frenzy begins, conventioneers swarming to buy exclusive Comic-Con swag.  Instead, I focused on the evening’s festivities — Tacocat at the Soda Bar.

I thought the show would be a function of Comic-Con, as the band’s persona suggests they should have their own cartoon, solving mysteries and fighting monsters between gigs.  Instead, the Soda Bar was a healthy Uber from the city center.  A salute to my driver Ubering on the side to put five daughters through college.

Although from Seattle, Tacocat (a palindrome — get it?) plays a sunny brand of pep-pop which should make them the official house band of San Diego.  And put lead singer Emily Nokes in the tambourine hall of fame, joining Roger Daltry, Davey Jones and Betty Cooper.  It is impossible to be in a bad mood after a Tacocat performance. 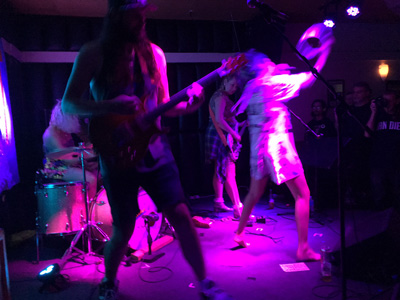 Like Tacocat, opener the Regrettes are a four-piece with a three-quarter female line-up.  I was excited to find them on the bill, having recently been given a shout-out on NPR.  Their garage-rock would grow dark, to be lifted from the gloom by chugging Ramones-style riffage.  They ended the show by saying they were being kicked out after their last song as they were under 21 — they flipped the bar the bird, and were then joined by a burly security goon supervising their gear removal and showing them the exit.

Comic-Con started in earnest Thursday morning, where I began the day, appropriately, standing in line.

Stan Lee, 93 years of age and going strong, is appearing at the event throughout the weekend, signing autographs at $100 a pop.  On Thursday, a drawing was held for a free autograph.  While I would never pay $100 for an autograph, I was perfectly willing to wait in line several hours for a 5 percent chance of pulling a golden ticket.  Clearly therapy is in order.

Comic kharma was with me, as I received a wristband with instructions to return later in the day.  Whoop!

I rendezvoused with my wife and we headed to the fabled Hall H — the Everest of Comic-Con.  The cavern holds 6,500 people and sports five billboard-sized video screens — hosting panels and previews for the big hitters (Game of Thrones, Marvel’s movies, Star Wars), fans famously sleep overnight to gain entry.

On Thursday, however, the line-up was light, and rumors proved true that one could stroll in and say they experienced the dark confines of Hall H, no camping out necessary. 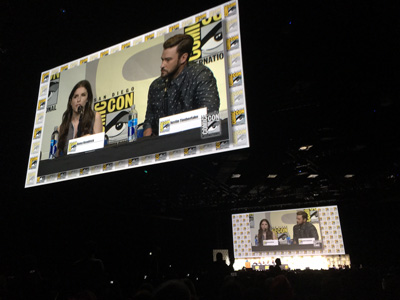 Dreamworks hosted the first panel, promoting the inevitable CGI ‘Trolls’ movie based on the bug-eyed hair-topped figurines of yester-yore.  Justin Timberlake (adorable) and Anna Kendrick (adorabler) were on stage, and it was a bit painful to watch them struggle answering moderator’s questions such as “What did you learn about yourself voicing a troll?”

A decidedly un-Comic-Cony presentation followed, with Oliver Stone on hand to discuss his next conspiracy thriller Snowden.  Young-adult stars Joseph Gordon-Levitt, Shelaine Woodley and Zachory Quinto (Spock!) were in tow, and the discussion turned from film promotion to civil liberties, with the new threat identified as data mining for big business (looking at you, Pokemon Go) — it was some refreshing gravity from the earlier Troll-chatter fluff.

Sadly, Edward Snowden did not make an appearance — I envisioned his introduction, followed by an escape down the aisles, chased by a team from the Justice Department.

Late that afternoon I queued back up for my meet-up with Stan Lee — his team is well-oiled, a partner to his right putting the item-to-be-signed in proper position, Stan in center with a quick scribble, and another to his left handing the item back with a polite “get lost!” to keep the line moving.

Unprepared with no Marvel-related merchandise, I pulled out my printed Comic-Con itinerary for signature reception.  I blurted out a quick ‘MY-SON-IS-IN-A-JUNGLE-IN-PANAMA-WORKING-FOR-THE-PEACE-CORPS-WOULD-YOU-SIGN-IT-TO-HIM?’, followed by a handler barking ‘No personalizations!’

Stan, whose eyes had been locked onto the table in front of him, paused, looked up at me and gave me a sincere but comical hands-up shrug as an apology — that was my Stan-the-Man moment.   Would there even be a Comic-Con without Stan Lee?

Tomorrow — a report from the show floor, with a headcount on Harley-Quinn cosplayers.