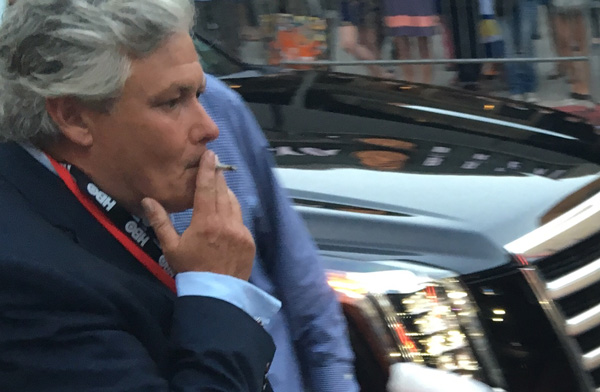 Friday was light on Comic-con’ing, the day spent with friends from Southern California, though we had a few geek moments.

Walking back to our hotel, we passed the theater where Conan O’Brien is taping his show — we watched that night’s Game of Thrones guest list make a dash from stage door to black SUVs, were they were whisked back to Westeros.

It was the GOT b-team, but still fun to see Varys with a full shock of gray hair and to hear the small crowd yell HODOR! as the actor passed by.   Ramsay Bolton (boo!), The Waif (hiss!), Sir Davos and Sam were also in the processional.

I’d also like to salute the hearty souls who were camping out for Saturday’s Hall H panel at 11:00 am Friday morning, with a 12 hour wait ahead for a wristband. Parked out on the hot black asphalt, brains baking, they must have been happily hallucinating about the upcoming panels featuring an Aliens reunion, a celebrating of Star Trek (Shatner!) and the PR junket for Marvel (Dr. Strange, Guardians of the Galaxy 2) and DC Movies (Suicide Squad).

I obviously have to make up for lost time, so am headed into the jaws of the Exhibition Hall for a full day of geekery.   Stay tuned.

Oh, and the answer to yesterday’s trivia question. Omaha native and scientist Ted Sallis was working to re-create the super soldier serum responsible for Captain America. With forces of evil breaking into his lab, he injected himself with the stuff for safe-keeping — one car crash later into the Florida Everglades, Sallis found himself transformed into the Man-Thing, becoming Omaha’s contribution to the Marvel Comics canon.