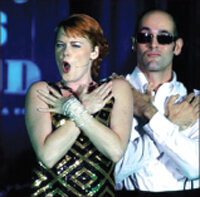 Gordon Cantiello returns to Omaha’s Jewish Community Center Every now and then, Gordon Cantiello flies in to Omaha from San Diego and creates some musical theater. This time, he’s hired a few of the metro’s favorite vocalists to present The World Goes Round, a Kander-Ebb revue opening this weekend. If composer John Kander and lyricist Fred Ebb aren’t popping up on your screen, think such musicals as Cabaret, Chicago, New York New York and Kiss of the Spider Woman. Add movies of the same names plus Funny Lady and the award-winning television special, “Liza with a Z.” If Cantiello’s name isn’t as familiar as year-around local venues, think of his hit production of another musical revue, Bee Hive, when it ran and ran at the Howard Street Tavern in the Old Market. More recently, he scored again with Smokey Joe’s Café at the Ranch Bowl, since torn down in the path of a Wal-Mart. When he first landed in Omaha more than two decades ago, he produced Sweet Charity, working with Norm and Lu Filbert and starring Ozzie Nogg in the title role. It was performed at the Jewish Community Center, the site again for his new show. A native of upstate New York, Cantiello met Omahan Barbara Ziegler in summer stock on the Atlantic coast. She invited him to Omaha where he plans to retire when he gives up teaching in San Diego. “Barbara made me feel welcome here,” Cantiello says, and Father James Gilg also gave him a warm reception. Maybe he felt lucky before arrival when he looked across the aisle and saw the great Beverly Sills, flying here to sing opera at the Orpheum. He chuckles at the memory of spotting her being picked up in a little Volkswagen before he was transported in a much larger car. He’s happy to be presenting the Kander-Ebb revue for a general audience after running it only two performances last summer, one a benefit for the Children’s Respite Center, the other primarily for family and friends of the cast. “I love this theater. It seats 350 but is only 11 rows deep.” Cantiello assembled both veterans of some of his earlier casts and several new to him, but not to Omaha theatergoers. Tiffany White-Welchen and Kathy Tyree, who used to stop the show with her “R.E.S.P.E.C.T” in Bee Hive, return under his direction and are joined by Kirsten Kluver, Jonathan Hickerson and Tim Abou-Nasr. Kluver has played her share of sexpots in such shows as A Funny Thing Happened on the Way to the Forum, so it’s not surprising to hear that she’ll take the lead on “All that Jazz” from Chicago. And, given the other show-stoppers in the Kander-Ebb songbook, expect the big final number to be a medley combining “Cabaret” and “New York, New York.” Abou-Nasr, who sang the title role in Joseph and the Amazing Technicolor Dream Coat at the Omaha Community Playhouse, sings “Marry Me” which includes a major dance opportunity with Kluver. Patrick Roddy choreographed the show, which includes some roller skating and banjo-playing. Mark Kurtz leads a band of seven musicians, who accompany Tiffany White-Welchen on the title tune that opens the show. The revue features the familiar songs mentioned above plus some you probably haven’t been belting in the shower, such as “Coffee in a Cardboard Cup.” Liza Minnelli fans will hear Kathy Tyree do her “Liza with a Z.” Cantiello qualified that promise to retire here after his teaching days end in California. “I plan to return here and do this 24/7.” , The World Goes Round runs Oct. 28 and 30, Nov. 4 and 6 at 7 p.m., Oct. 31 and Nov. 7 at 2 p.m. at the Jewish Community Center, 333 S. 132nd St. Tickets are $35. Call 706.0778 for information.