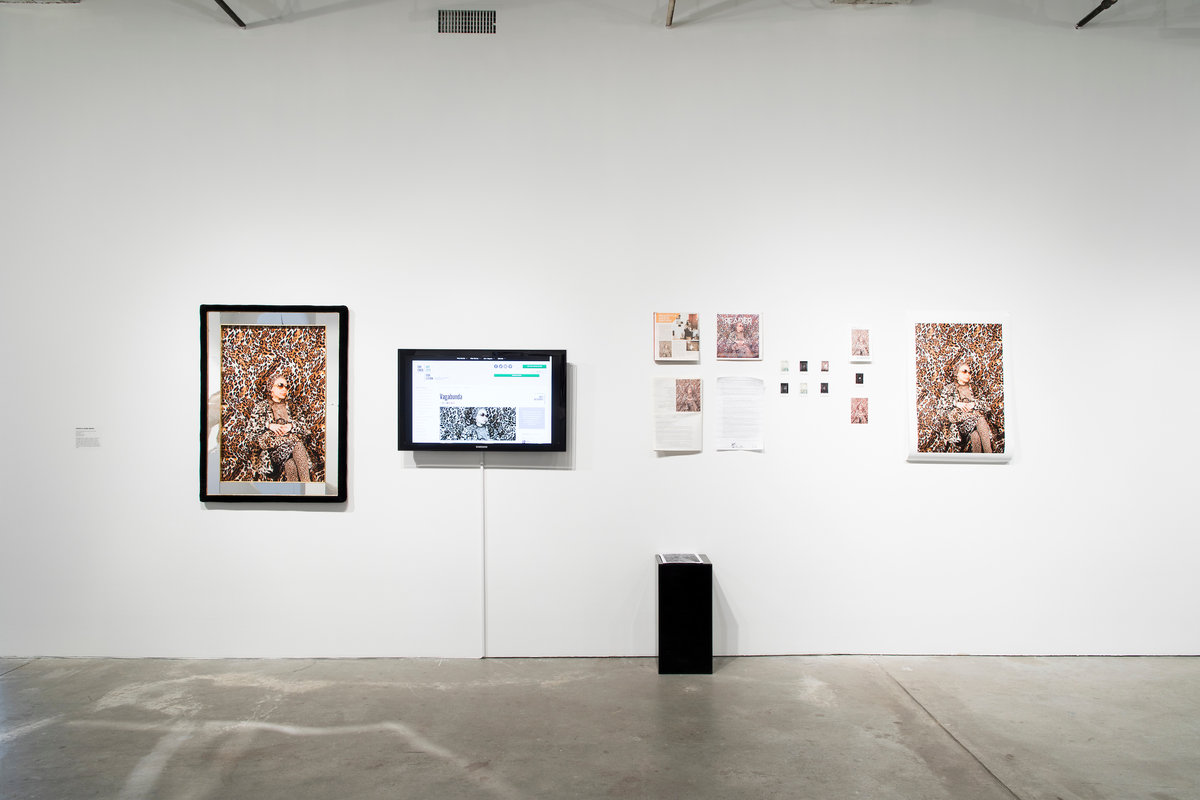 From atop our perch in the animal kingdom food chain, we humans enjoy a particular point of view. Evolution, we reason, has been kind.

Yet, how separate are we really from those we share the planet? And if, as the Puritans decreed, Nature is what we were put into this world to rise above, why the continued fascination with the beast within?

Greek mythology got to this idea early: it included such human hybrids as satyrs, centaurs and harpies. The creature it called Chimera was a monstrous and fearsome combination of lion, goat and snake.

Science fiction now provides a range of provocative examples of human chimeras. Think Mary Shelley’s Frankenstein, H.G. Wells’ The Island of Dr. Moreau, George Langelaan’s The Fly, Margaret Atwood’s MaddAdam Trilogy and the like. They deal with the potential of scientific engineering, and the societal and ethical questions and consequences that arise from its use.

In a similar vein, Chimeras, one of the trio of current exhibitions at the Bemis Center for Contemporary Arts, was organized to explore six artist/collaborator’s responses to the slippery boundaries between human and animal bodies, since they are “increasingly integrated in medical, pharmaceutical, and biotechnological realms.”

The artists’ starting points are diverse; some are inspired by love of the natural world while others are intrigued about how culture values reproductive technologies. And it is notable that each artist is multi-disciplinary–a hybrid of ideas translated through sculpture, video, photography and installation. 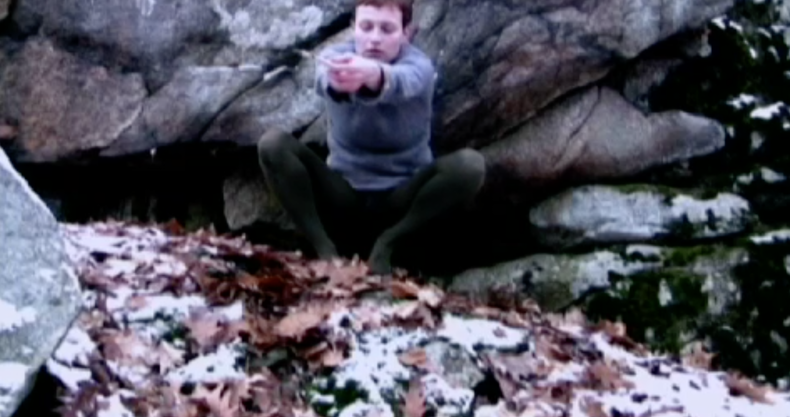 The show opens with “The Timber”, a 17-minute video piece by Julia Oldham, a performance artist/choreographer/animation and live action video artist. Oldham, who describes a lifelong fascination with nature, math and science, creates work whose intention is to cross a communication divide between humans and critters by adapting the latters’ conventions and behaviors.

The result of a residency in Marshalltown, Iowa, Oldham spent time studying the ritualized motions and habits of the spiders and insects that she observed in the forest and prairie landscapes there. In “The Timber”, Oldham assumes the role of interpretive dancer, acting out repetitive sets of movements inspired by invertebrate behaviors.

The resulting video is a composite of several performances filmed on location and edited to show the performance at speeds ranging from real time to greatly accelerated, to mimic actual rates of insect movements.

It is enhanced by an overlay of nature sounds, especially the clicking and whirring noises of bugs (many fabricated by the artist in the studio). Oldham seems to remind of the significance of non-verbal expression—those gestures and social cues that may be understood at the most instinctual level, with which humans have lost sensitivity in the wake of verbal and virtual communications.

Working along a similar vein of exploring animal nature in humans is the mesmerizing art of Kate Clark. The Brooklyn-based artist is essentially a taxidermy sculptor who takes unwanted and imperfect hides and painstakingly reconstructs each mammal accurately, save for the startling addition of human facial features derived from Clark’s sessions with live models.

Two such sculptures are on view here: “Rivalry”, which features two baboons, and “Bully”, presenting a pair of wolves. Each grouping exhibits posturing behaviors associated with but certainly not limited to their species—competition in the former, dominance and submission in the latter. 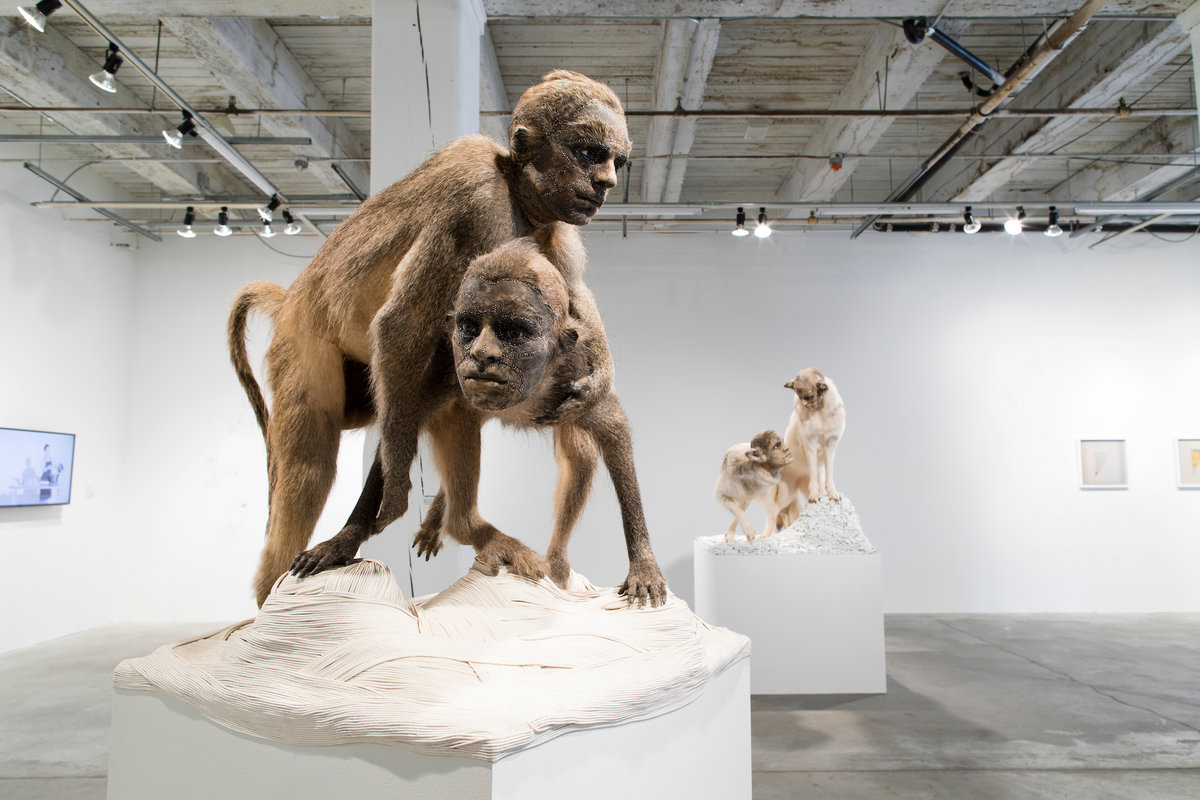 The addition of the human faces brings into sharp relief the anthropomorphism to which art so often only alludes. Clark’s level of attention to detail and expression renders the mashup beguilingly possible.

In fact, various forms of animism—a belief in the spiritual qualities of objects, plants and animals—run through the folk and religious lore of many world cultures. The hare was of particular interest to the late German conceptual artist Joseph Beuys, for whom it represented a creature able to transcend physical and spiritual realms.

Reaching beyond the polarities of life and death, artists Lucie Strecker (a performance and hybrid art researcher and practitioner) and Klaus Spiess (a specialist in mind-body relationships) collaborated on a Beuys-inspired project to incorporate the economic and physical life cycle of an artwork into the mix.

They transferred rabbit DNA from an artwork by Beuys from which they created new, living cells whose growth or death rates they timed to both auction values of Beuys’ artworks as well as livestock futures on the New York Stock Exchange.

As presented at Bemis, “Hare’s Blood +”, consists of a diagrammatic wall drawing roughly describing the conceptual and technical underpinnings of this undertaking, as well as an accompanying video on the wall, and gavel and block on a pedestal.

It is a complex work to unpack in anything close to its entirety, given its already complicated intermeshing of Beuysian social art practice with broader considerations of science, economics, and ethics.

It is clear that these interdisciplinary artists wish us to find points of discussion along a wide spectrum of value systems, many of which we didn’t imagine could be related. 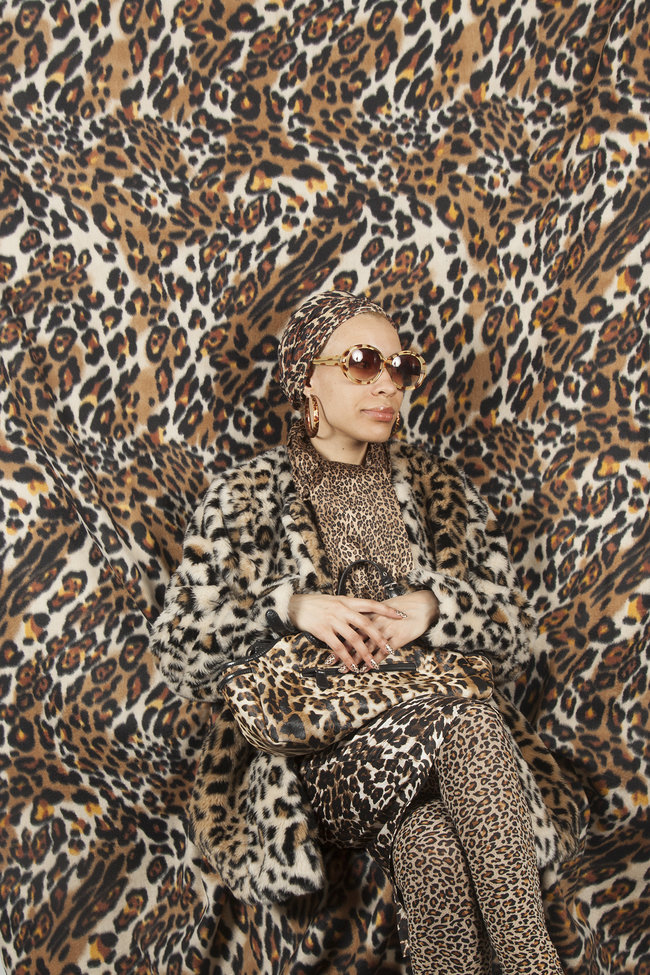 Replication is also at the heart of the installation “Lost and Found But Still Can’t Be Seen (An Altar for My Aura)” by Rashayla Marie Brown. At its center is the winning photograph Brown made of herself as her grandmother, ensconced entirely in leopard print, “You Can’t See Me, Fool”. As part of her overall body of work, it was just one of many she creates to explore the “role of the artist as an agent and object of desire.”

This particular image, however, took off virally across the internet and became its own phenomenon, which the artist continues to document and archive. Multiple instances of its publication, authorized and otherwise, are part of the display, as is a rather unique contract she has fashioned that extends her control of her artwork beyond retaining copyright (use of the image) to the conditions of its resale in perpetuity.

When and how, she questions, does an artwork belong to the artist once it has left the studio, when its image is more treasured than the object?

Rounding out the exhibition are not one but two artists dealing with the human body’s capabilities for reproduction, more specifically, with a woman’s ability to produce breast milk. 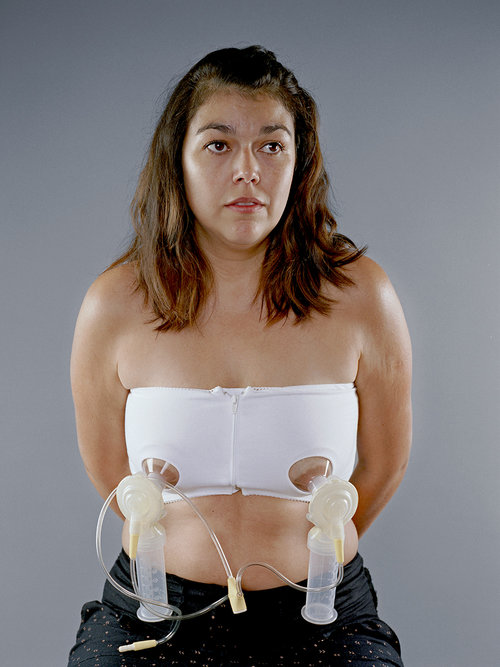 Leah DeVun’s suite of color photographs entitled “In the Age of Mechanical Reproduction” consists of unglamorized portraits of lactating women matter-of-factly wearing their breast pump devices. The artist, who is also a noted historian of gender studies, was inspired by her own “very medicalized” birth experience to examine such functional interactions of body and technology.

Of course, anything that classifies as a “bodily function” is bound to be a bit of a taboo, visually or otherwise. But at a time when we are daily reminded in commercials that certain toilet papers will make eliminating more enjoyable and that prescriptions are available for all sorts of physical deficits, it may seem curious that breastfeeding, no matter its form, is TMI.

The women depicted by DeVun have neutral expressions, masking their individual responses to appliance-enhanced motherhood, which serves to make the portraits that much more discomfiting.

Interdisciplinary artist Miriam Simun also collaborated with breastfeeding mothers, intrigued by the informal sale of excess breast milk through such grey markets as Craigslist. For her initial project, she sourced milk from three women, which she made into small batches of artisanal cheese and served with regional food pairings in an installation called “The Lady Cheese Shop”. (Related video, paperwork and diagram are part of the Bemis presentation.) 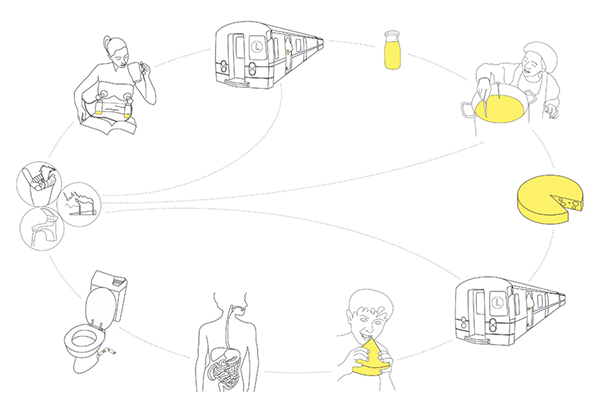 Riffing on such contemporary obsessions as locavore food culture and culinary craftsmanship, Simun also raises questions about the use of the human body to produce food. In a world that benefits from donated blood, semen and organs, what are the necessary technical, legal and ethical boundaries?

Unlike the beasts of Greek mythology, there is nothing truly monstrous about the hybridity represented in Chimeras. Its artists instead posit that we benefit from understanding our animal nature, and should acknowledge it as one of the essential parts of ourselves.

Chimeras runs through April 29 at the Bemis Center for Contemporary Arts at 724 S. 12th Street in the Old Market. Open hours are Wednesday-Saturday from 11am-5pm and admission is free. For more information, call 402/341-7130 or visit www.bemiscenter.org