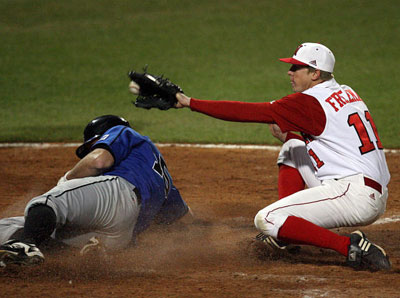 April 5 Creighton Bluejays vs. Nebraska Cornhuskers Hawks Field at Haymarket Park, 455 N. 10th St. 6:35 p.m., $5-$13, 800.8.BIGRED, huskers.com   For the Husker faithful, the current sports calendar has been a year of bidding adieu to old rivalries as dear old Nebraska U. heads to the Big Ten next season. Fortunately, one of the best rivalries will continue, that of course being the epic battles on the baseball field with Creighton. As the teams prepare for the first of three regular-season meetings (the second will be on April 19 for the grand opening of TD Ameritrade Park), both are in bounce-back mode in 2011. A year after missing out on the Big 12 Tournament, Nebraska charged out of the gate early in the season, including taking two of three from then-5th-ranked UCLA. As NU pins its hopes on a return to glory in their final stanza in the Big 12, Creighton is hoping that the move to a new park provides a little bit of luck to the home team, which hasn’t advanced to the NCAA Tournament since 2007.