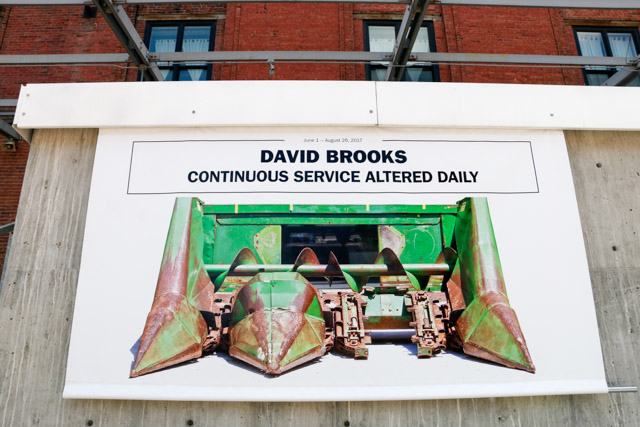 [Publisher’s Note:  The Reader regrets the errors in the print version of David Thompson’s fine review of the David Brooks exhibit at Bemis, Continuous Service, Altered Daily, for not listing his byline. The correct version can be read below.]

One way to understand David Brooks’ ambitious installation Continuous Service Altered Daily, currently on view at the Bemis Center for Contemporary Arts, is to think about what it is not.

In his highly articulate lectures and presentations, Brooks frequently speaks of the “exploding diagrams” of machines and other complicated objects that one finds in textbooks and operating instructions. In these elongated renderings, the relationships among the various components of an object are preserved but spread out across space in order to make their functions easier to comprehend.

By contrast, in this installation of a single deconstructed piece of heavy duty farm equipment Brooks explodes the explosion, disrupting established relationships among the parts and reorganizing them in categories defined in terms of a seemingly alien discourse.

The object in question here is a 1976 John Deere combine harvester, a huge and complex piece of farm machinery that appeals to Brooks because of its key position at the interface of the human and natural worlds.

Brooks is no stranger to farm machinery. In 2013, he exhibited a 1970s-model Dynahoe tractor at the Storm King Art Center, an outdoor sculpture park an hour’s drive north of New York City. In that piece, the tractor was essentially sliced like a ham and buried underground, with several slices given their own concrete-lined airshafts that allowed the viewer to look down and see the parts embedded in one of Storm King’s pastoral hillsides. 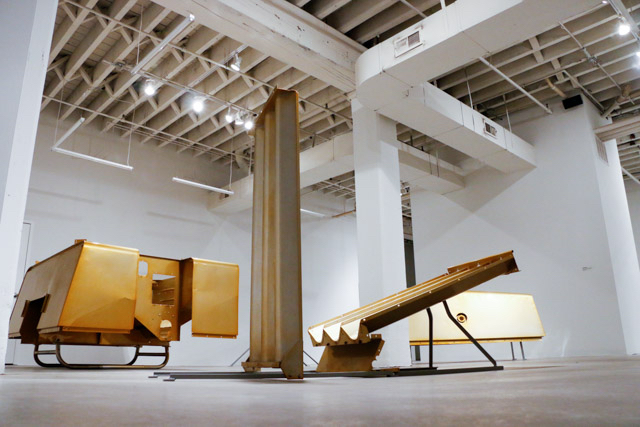 In “Continuous Service Altered Daily,” Brooks brings the machine parts to the surface and spreads them out across most of Bemis’s first floor in a pattern that he describes as an “asteroid field.” The installation fits perfectly in the space, so it’s surprising to learn that it was initially designed not for Bemis but for the Aldrich Contemporary Art Museum in Ridgefield, Connecticut.

As Nebraskans and other Midwesterners know well, a combine enables farmers to draw from nature’s bounty by reaping, threshing, and winnowing the grain that helps feed the world. These and other functions are accomplished by hundreds of mechanical parts moving in synchrony.

Brooks is drawn to this complexity in part because much of it cannot be seen by simply looking at the machine. With a bit of grandiosity, one might say that the machine as a whole exists beyond the boundaries of perception.

As Brooks has put it, “[A]ny one human being’s attempt as an individual to perceive all of [the combine’s] functions at one time is an impossibility.” This installation is an attempt to overcome that impossibility, or at least explore it.

Brooks sees nature as having a similar complexity that is similarly hard to observe. Rather than view this as a limitation, however, Brooks sees it as an opportunity to use one’s mind to fill in the gaps of understanding. 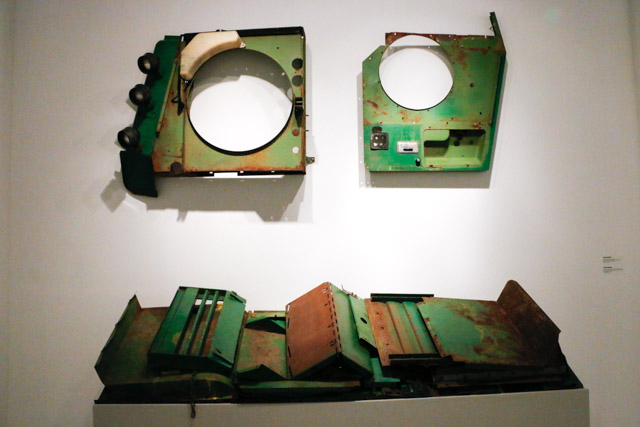 Drawing a comparison between the multi-functionality of a combine and the complex interrelationships within nature is difficult enough. Brooks carries the endeavor one step farther, however, by grouping the myriad different parts of the combine into categories that correspond to specific ways in which nature benefits humankind, i.e., to the “ecosystem services” that nature provides.

Although it hasn’t quite made it into the mainstream of social discussion, the notion of ecosystem services is an important way of underscoring the importance of preserving our environment.

We need nature, the argument goes, because it carries out functions such as pollination, disease regulation, and water purification that are essential to our well-being. Brooks focuses on nine different ecosystem services here, using them as guidelines for organizing the combine’s many parts.

Frequently there is a metaphorical connection between a particular combine part and the ecosystem service to which it has been assigned. Take, for example, a work called “Fertilization” that is grouped in the category of “Pollination.”

The work consists of an unruly pile of electrical wires from all parts of the combine. It is not too much of a stretch to see these wires as creating the connections that allow the machine to function, just as pollination is the connection between the “male” and “female” parts of flowering plants that makes reproduction possible. 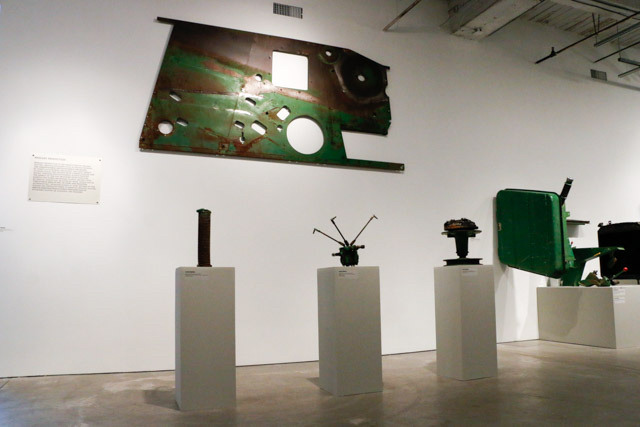 At first, seeking out such analogies while strolling through the installation struck this critic as a struggle, maybe one curlicue too many in the baroque conceptual architecture of this show. What do crankshafts, gears, chutes, and fasteners have to tell us about “erosion and flood control” or “habitat formation”?

It eventually becomes clear, however, that Brooks is deliberately testing the boundaries of explanation. It is the act of explanation itself that interests him. It depends on observation, or what he calls “witnessing,” a combination of “experience and data.”

He speaks frequently of his admiration for scientists, particularly those whose research takes them out into the world. They are constantly engaged in “acts of cataloguing,” Brooks notes, gathering objects and developing a taxonomy that makes the relationships among them easier to understand.

Brooks adds yet another level of complexity to his own taxonomy by defining each ecosystem service with a paragraph of wall text that is so dense it reads like Elizabethan poetry. Who knew, for instance, that “microorganisms in dark regions of the ocean use chemosynthesis to produce organic matter, derived from reactions in which substances such as hydrogen sulfide or ammonia are oxidized”?

Standing outside these elaborate explanations and conceptual frameworks are the objects themselves, which sit on pedestals, hang on walls, or lie quietly in vitrines as if they were the remnants of an ancient civilization.

Brooks has treated the objects differently. Some are John Deere green, with the scratches and rust that suggest years of heavy use. Other pieces have been sandblasted into a grey uniformity and then positioned together in tight groupings that suggest the wall sculptures and stand-alone structures of the sculptor Louise Nevelson. 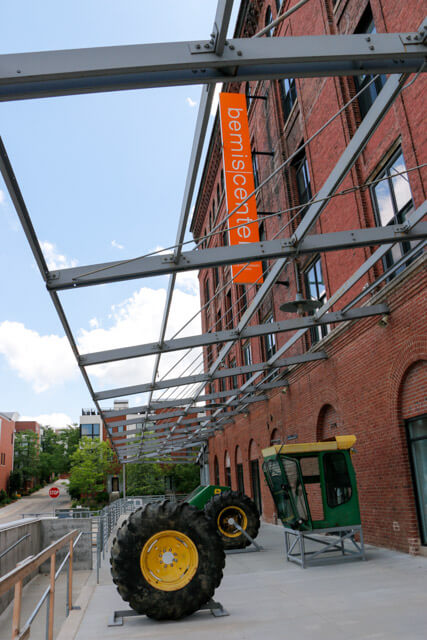 Still other parts have been brass-plated in a way that renders them objects of beauty at the same time as they are components of a machine. It is ravishingly clear why Brooks chose to define this last group of objects according to the most human-focused of ecosystem services, “ornamental resources.”

Much is made of the fact that, as the introduction to the show puts it, Brooks “has arranged every part [of the combine], without a single piece excluded.” This imperative of inclusiveness is part of the impulse to catalogue; if too many objects are left out, then the catalogue isn’t really doing its job of providing a comprehensive explanation.

At the same time, however, Brooks wants us to think about “objects that have their own merit as individuals.” He speaks of releasing the “inner Brancusi” of the combine components, allowing the beauty and formal appeal of each object to stand out and claim our attention as did the simple, elegant sculptures of Constantin Brancusi (1876-1957).

None of these explanations quite does justice to the show itself, which provides a unique opportunity to dance along the intersection between humankind and nature, to confront a vast array of unfamiliar objects, and to view them both on their own terms and in relation to several different, overlapping frameworks.

The “witnessing” that is encouraged by this installation is something we can carry out into the world beyond the gallery, and in so doing enrich our understanding of the systems that define us and the role that we as individuals play in determining whether those systems make the world a better place.

“Continuous Service Altered Daily” is on view at the Bemis Center for Contemporary Arts, located at 724 South 12th Street in the Old Market, until August 26, 2017.