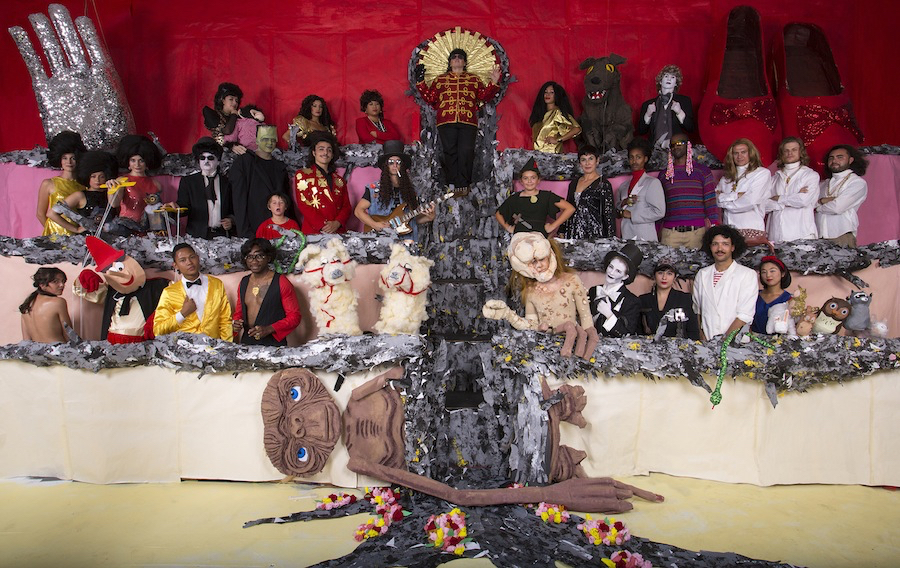 Pulling at (almost) excessive references, both Warren and Fankhauser’s work dissects painfully common narratives. Per the exhibition text, the artists “pay homage to the act of remembering in its beautifully misshapen forms and perfect fallacy.” These notions of attempted memory, trans-formation and immortality are the baselines at Darger HQ—both esoterically and literally.

Entering the dark gallery on Vinton Street sits a boxy Sony TV playing two of Warren’s ad hoc videos. Her videos are made in collaboration with a slew of community members, kids, professionals, and friends.

Within her larger photo and video practice, she portrays “her fallen heroes and totems of imagined affinity by [adding] remade images of her child idols into art history.” The result is a Pee-Wee’s Playhouse unbelievably dense with metaphors and fun.

As if I was at The Max, I caught myself tapping my feet and singing along to the grainy, yet familiar beat. Alongside Wonder, peculiar sounds such as the laugh from the end Michael Jackson “Thriller” and the Pointer Sisters “I’m so Excited” (sans Jessie Spano) stream in and out of focus. The actors, singing with a campy karaoke elegance, further drive Warren’s DIY aesthetic home. It is a brilliant tactic.

Warren, who plays Stevie Wonder in the music video, is set within a menagerie of art history. Primavera by Sandro Botticelli adds layers that are almost too much to take in. The video fades to black with the gleeful smiles of her crew twitch into the credits.

As the second video begins, Warren is seated on a throne among dozens of other people, objects, and props. This set, in all its craftiness, includes a horizontal E.T., a larger than life bedazzled glove, two ruby-red slippers, a spongy llama, Frankenstein, Pinocchio, trashy consumes, and many other things all presumably pulled from her art history book. Michael Jackson’s “You Are Not Alone” acts as both a title and co-theme for the video. The other theme is a recreation of the Genealogical Trees of the Dominican Order.

The community playhouse aesthetic of this absorbing work is a mix of a church choir and iconography of a sing-a-long children’s TV show. If not clear from the beginning, Warren, as the (super) star, is Michael Jackson.

Her costume, playing into Michael Jackson’s tropes, is a elegant red blazer from Dress Barn, brocaded regalia, a short black haired wig, sunglasses, and of course a singular glove. Jackson’s smug shyness is not lost on Warren as she tries not to look at the camera. It’s so bad it’s good!

As the video unfolds, Warren arises from her thrown and begins gazing at some of the characters tap dancing to a synthy beat. Enter stage left, Freddy Kruger and a dude with a gimmicky “chainsaw”.

The scenario continues and its clear this video is more “glampy” than the campy first video. Then the choir continues to sing in an almost “We Are The World” moment. The heartwarming end is solidified with a tribute to the king of pop, “Never Say Goodbye, Michael.”

Warren’s idolization of the pop stars of her youth is continued from the first two videos to the third. Her gender-bending personification reaches to Freddie Mercury/Queen’s “Somebody to Love” and a re-creation of Saints Cosmas and Damian by Matteo di Pacino.

The canon of art history is equally rich in this video. With the other videos, Warren’s aesthetic vision is affirmed. She has exported art history and metaphorically burned it along with an illegally downloaded version of Queen onto a 3.5-inch floppy disk. This 1080p video is then crammed on a seemingly ancient Sony TV. Its archeological reference is not lost.

The scene begins with Warren in a red “Handmaids” smock with another character “cutting” off a man’s leg. In biblical proportions, the community actors mime their roles, in ways only Warren can bring out, as props chunkily move around the set.

With each passing second, Warren begins to look distraught and then the oh-to-familiar hum of “Somebody to Love” begins to tick. Warren strips out her “Handmaids” smock to reveal a red Lycra body suit. This suit, however, includes Mercury’s iconic chest hair craftily attached. She begins to pounce around the stage with a Mercurian arrogance.

Warren begins lip-syncing to her own singing of the hit song. The camera pans to the choir and exactness is tossed out the door. The previously severed leg now reëmerges with a face. Then, with a flash, I gasp out loud as a version of Britney Spears and Justin Timberlake’s iconic 2001 American Music Awards double denim look appear on screen. Fade to black.

This is Warren’s not-so-secret weapon. She fishes for nostalgia of her/the good ole days. Back when Britney loved Justin. Back when Freddie Mercury was alive. Back when music had meaning. Back to 4:3. Back to a simpler time—right?

Her remembering of shared pop-history is further elevated through her un-exact sets, costumes, and re-reading of art history which reside somewhere between RuPaul’s Drag Race and your mom’s scrapbooks. Like our memories though, it’s less about what actually happened and more about the warm fuzzy feelings of remembering. Plus, who doesn’t love a Michael Jackson impersonation?

Identifying as a “committed member of the MTV generation,” Fankhauser is as vision focused as Warren’s affinity to nostalgia. For him, though, it is honed more intently on television, media platforms, and a different kind of celebrity.

On August 4, 2002 the Anna Nicole Show debuted on E!. It’s catchy opening still rings in my ears; not unlike any Michael Jackson song. The reverberating impact of her portrayed life, especially her “internal optimism found in sadness”, runs through Fankhauser’s work as both an anchor and mirror.

His work is also rooted in an alternative reading of Oswald Spangler’s “The Decline of the West or The Downfall of the Occident”. In this 1922 two-volume book, Spangler looks at a society in decline and a rejection of Eurocentric history. Smashed together with Anna Nicole Smith, Fankhauser’s three pieces at Darger HQ are a spider web of tragedy, comedy, and cross-cultural intellect.

Hung low on the wall, a photograph with an iconic white trash rose tattoo beams in LED. The high theory of Spanger is amplified through the lo-fi tattoo iconography. It is hard not to think about post-November-8 contemporary American history, with the endless Twitter feeds of #MakeAmericaGreatAgain and complicated optimism.

The tattoo further brings to the foreground the power of a constructed narrative. Even with the permanence of a tattoo/past rhetoric, the present can be glowing. Smith’s faux-optimism reigns. All she wanted was a big tub and for her room to be pink, instead…well, you get the picture.

Adjacent to Warren’s boxy Sony is a large wall-scale projection. On first glance, it looks like just black and white photograph of Marilyn Monroe or Smith (Smith’s obsession with Monroe is well documented).

As it turns out, it is Smith as Monroe—the super-stardom rise (and fall) of one blonde bombshell has been replaced with another. Caddywompus kerning throws her face angularly across the wall. However, in this photograph the eyes start moving as a computer generated gif.

Smith’s eyes have been replaced with super flat white and black shapes. As the projection plays, her face is warped forcing smiles and eye movements. Her dignified, albeit creepy, features gaze around the gallery, watching the other works. The double-dead celebrity lives on, and on, and on. 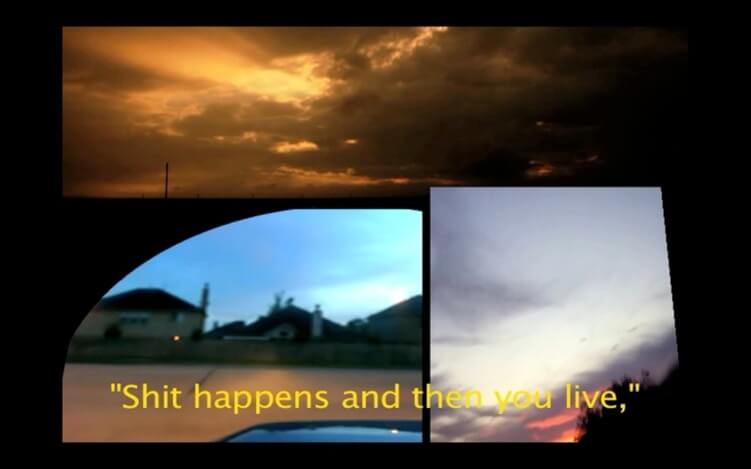 Fankhauser senses the pulse of Middle America in each of works on view, and this is most apparent in Justice of Decline, the last video in the exhibition. The micro TV plays a video in a manner not unlike Tumblr. Vertically scrolling images, gifs, and text play together.

Fuzzy footage of sunsets/rises is overlaid with words such as “Shit happens and then you live.” The creamed-corn yellow text traces, what I am assuming, is Fankhauser’s decision to move back to Omaha or possibly narrating some shared cultural experience conflating Spanger and Smith. Personally, I found endless analogous experiences and reactions with the author of the text.

The “found in sadness” aspects of Smiths life are slammed to the forefront as it relates to Flyover Country. The banal yet miserable narrative is a reminder of the difficulties in just living, especially in this political climate.

Fankhauser’s work is smart. He brings lo-res scavenging to the forefront as a wunderkammer of virtual realities of both high and low culture. He gives a lot away, but in a non-linear way.

Together Forever is really depressing, in a good way. It proposes re-crafted realities of our favourite celebrates: Michael Jackson, Freddie Mercury, Anna Nicole Smith, and Stevie Wonder set to the least pretentious review of art history and intellectual debate.

The dark space is a fitting container for this conjuring. The glowing overlap of each work is a literal and metaphorical reminder of the bright lights of Hollywood as it relates to our current understanding of reality. Is Anna Nicole Smith’s reincarnation the most fitting analogy for 2017? If not her, what?

Together Forever continues through August 27 at Darger HQ located at 1804 Vinton Street. More at dargerhq.org.