Home » Art » Documentary looks at execution through the eyes of executioners 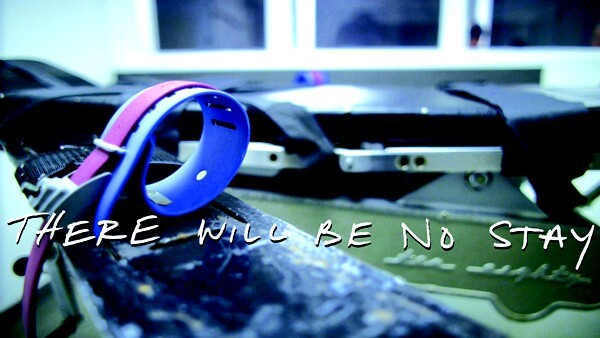 Last month State Sen. Ernie Chambers finally got enough fellow legislators to support repealing the death penalty in Nebraska. Capital punishment foes welcome the news, among them Omaha filmmaker Patty Dillon. Her new documentary There Will Be No Stay critically looks at the issue through the prism of two former executioners.

Before making the project a stand-alone feature documentary, Dillon envisioned it as part of a 13-episode series. She finally fixed on documenting two men forever damaged by taking life. Ex-penal officers Terry Bracey and Ira Craig Baxley carried out executions for the state of South Carolina and their actions continue to haunt them. A colleague executioner committed suicide. The suicide of another executioner convinced Dillon to pursue the story.

Dillon, a Calif. native who did part of her growing up in Neb., is fascinated by “the dichotomy” of state-sanctioned killing that requires the condemned’s arm be sanitized before lethal injection and that the condemned be healthy in order to be executed and the irony of the official cause of death in executions being entered as homicide in coroners’ reports.

In addition to the executioners, her film includes interviews with two men who once supported capital punishment but now reject it: an ex-prison warden and the grandson of a murder victim.

Dillon, who used to be on the fence, says, “Knowing what I do now, under no circumstance would I ever condone capital punishment. Executions destroy lives far beyond the condemned. The victims are all of us.” She’s heartened five states have abolished the death penalty since she began the project. with Nebraska being the latest to do so after legislators overrode Gov. Pete Ricketts’ veto of the appeal.

“This is absolute progress and evolution,” she says.

The high-energy, fun-loving, health-minded Dillon, who studied theater in college, is also sometimes a movie-television stunt-person and earned her Screen Actors Guild card on Dawson’s Creek. She says with her positive disposition and high regard for life she never expected to “develop this sort of love story with two executioners.”

“To be immersed in such a heavy subject matter for so many years meant finding a balance to really focus on cultivating joy and peace.”

Dillon says telling jokes is one antidote for the grimness. Doing things outdoors is another. Even with all that, she says the heaviness “never leaves you”, but she says she feels this is what she is supposed to be doing.

She delved deep into the dark world of execution, only drawing a line at not witnessing one in person.

“The more I learned, the more I had to know: What does it require to take a life? Is it an additional chromosome or is it a missing chromosome? And when I found they [executioners] were killing themselves, I thought there has to be others out there.

“I just was hellbent.”

The impulse to tell the story spilled out of her.

“The floodgates opened and I drafted an entire 13-part documentary series in four hours. I knew my life would never be the same.”

She got Omaha producer Dana Altman to mentor her. He led her to filmmaker-musician Nik Fackler. Dillon had previously produced and managed Fackler’s documentaries Dharma Sangha and Sick Birds Die Easy and also produced videos for his group, Icky Blossoms. She urged him to direct her film but she ultimately decided: “I was the only who could direct it.”

Getting an executioner to cooperate became her Holy Grail.

“I was told, ‘You will never find an executioner that’s going to talk to you, let alone on camera.’ I was cold-calling and researching online all day, every day. It was due diligence for nine months. I set my life up so I could just do that. I sold my car, I rented a little apartment. My focus became telling this story and I didn’t stop. It became my obsession.”

She found Bracey and Baxley through anti-death penalty coalitions. The men filed lawsuits seeking compensation for trauma they claimed to suffer as the result of performing executions they alleged they were not trained to do and not given counseling for afterwards. Since taking disability retirement in 2007, they’ve both been treated for mental and physical health problems and unable to work.

Dillon secured their cooperation through their late attorney Ben Mabry. Countless phone conversations ensued. A co-dependance developed whereby she was their empathetic ear and confidante – their own wives don’t understand why they can’t get past this – and they were her key sources. A real friendship emerged.

“I never would have anticipated a human connection as deep as ours has grown over the years. I went into it very gently with them to build that trust, so it wasn’t about let’s go to really uncomfortable places right away. Two of my great teachers today are by society’s own definition serial killers and knowing them and this journey has taught me that my compassion goes far beyond what I felt it could go.”

She admires their “fierce courage” and she’s learned “the importance of forgiving ourselves as well as each other.”

Getting the small indie film made also meant running up credit cards and finding investors.

“It’s been guerrilla the whole time,” says Dillon, who credits the project’s fulfillment to “an amazing team of people that believed in me.”

Dillon found a co-producer in Chevy Kozisek, whom she calls “a mover and shaker,” and a director of photography in Jeremy Osbern, whom she calls “amazing.” Nik Fackler didn’t end direct her film but he did edit it. Dana Altman’s North Sea Films became the project’s production home.

There were shaky moments, mostly having to do with funding delays. Dillon stayed the course anyway.

“Trusting that this was going to happen and how powerful it was going to be was literally going up hill for four years straight. There was something in me that knew I was not supposed to give up, so I didn’t. I’ve learned I’m a determined person.”

The experience, she says, “stretched me in every way, shape and form.”

As for Baxley and Bracey, they lost their lawsuits and remain unemployed.

She did get them to come to Omaha for on-camera interviews. In the wake of national media interest since the picture’s release, she says, the two “have completely gone into seclusion and for the first time ever, won’t even answer my calls,” adding, “They totally shut down.”

Despite their silence, her loyalty remains unflinching.

“It’s like they chose to tell me their story and I will stop at nothing to do that with great honor and gratitude. I think about them constantly. I am sure they will come back out when they are ready. If they don’t, while heartbroken, I would support them in moving on with their lives and continuing their healing process. They know beyond a shadow of a doubt I am here for them as long as I am breathing.”

Dillon says she is currently weighing festival offers and submissions. CNN’s Death Row Stories is profiling her this summer and 60 Minutes may also do a piece.

She and her director of photography Jeremy Osbern are now prepping to co-direct a short for the nonprofit Journey of Hope: From Violence to Healing. This organization, led by murder victims’ family members, does public education campaigns on alternatives to the death penalty.

Meanwhile, she’s moving to Seattle to realize her dream of living and writing on a boat.