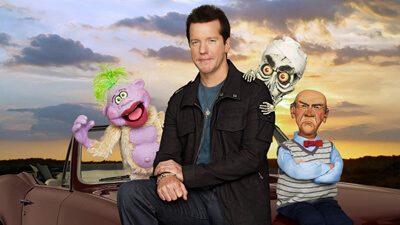 REVIEW BY JESSICA CHIZEK Superstar comedian Jeff Dunham brought his band of merry puppets to the Qwest Center last week and the ventriloquist from Texas who recently was called “America’s favorite comedian” lived up to the hype. Dunham’s opening act, Brian Haner, better known as the “Guitar Guy,” definitely got the show off to a hilarious start. The musical comedian sang a song about Omaha and its gay bars that got big laughs. Dunham opened his act by letting the crowd into his personal life.  He showed some pictures of himself growing up (some memorable school ones with his early puppet creations. It was interesting to see how his fashion sense has improved, which he credited to his daughters’ influence.   He got a bit serious and revealed some honest emotions when he mentioned his recent divorce, but quickly turned the mood around with his puppet “Walter” — the old grumpy dummy that complains about his wife. There were a couple of mishaps during the show, but they turned out to be some of the funniest parts. For example, he introduced a new character — “Achmed’s (the dead terrorist) Son.” During the act, the puppet’s left leg kept sliding off the seat so Dunham had to keep calling one of his assistants out on stage to help fix it (since both Jeff’s hands were being used). It happened several times. Finally, the assistant came out with duct tape to keep Achmed’s leg in place.  The comedian definitely showed his experience in these moments; he’s excellent at improv. Dunham is so skilled I seriously felt like there was another individual on stage. He interacts with his puppets so well. He laughs with the crowd when they laugh at something the dummy “says.” I would say “Peanut” and “José Jalapeño” got the most laughs. He ended the show by using multiple dummies at once — displaying such a clear grasp of each identity and transitioning so effortlessly. The only downside of the show was that “Bubba J” did not make an appearance.