Home » Art » Elephant in the Room 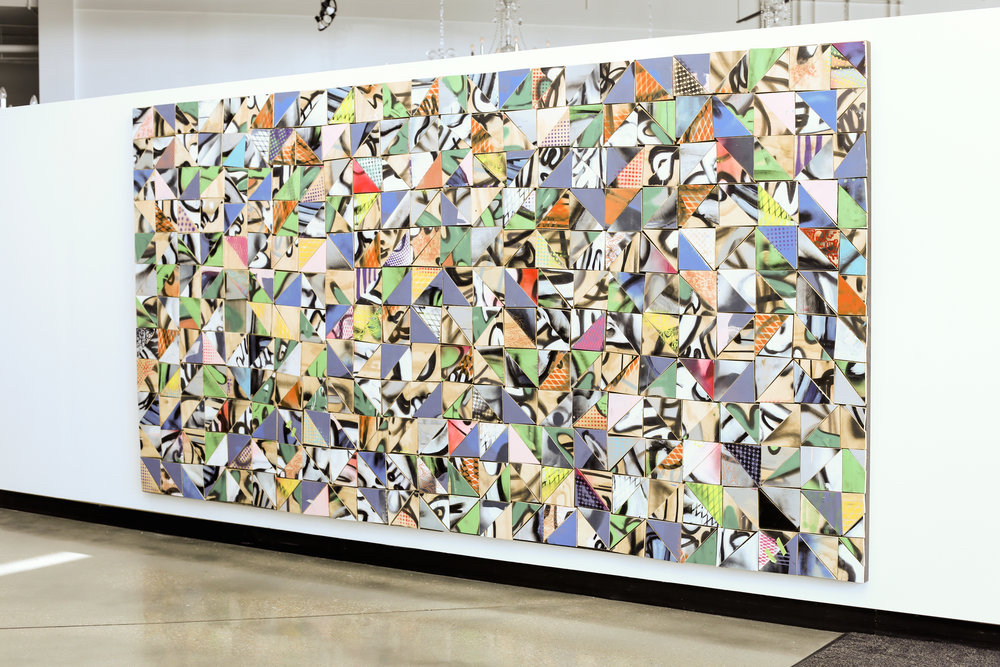 The elephant serves as a bit of an icon—its bold and noble presence draws a parallel to the majesty of nature. The elephant has served as a motif of artist Gerard Pefung’s work as well.

Pefung has captured its spirituality and grandeur in paintings and sculpture for much of his career. For his newest exhibition at Alley Poyner Macchietto, he takes a gloomier look at the elephant’s prospects in the real world.

Saddened by the prospect that in his lifetime elephants may vanish completely, the artist began to take some time to examine his and his community’s role in their demise. He considered the waste created in his studio and how it contributed to the piles of waste in the streets.

Inspired by his collection of emptied spray cans (his medium of choice), Pefung set out to create a new exhibit that utilized and showcased recycled found objects for sculptural communities and they and the way we consume.

Pefung’s signature style is still ever-present with the vibrancy of color and bold lines. The 3D work “Tropical” resembles a palm tree, a natural element overtaken here by destructive force. The spray cans and plastic bottles that make up the cascading prawns are covered in a variety of bright and shiny colors. The color masks the fact that this is trash much in the way that the shiny, new, fun object can end up in a landfill without much thought.

For “Confined,” discarded wood is cut down into small triangles reminding us of the way little pieces of waste can amass over time. The installation illustrates a landscape built by consumption.

The pieces aren’t sized evenly and you can see through to the backing, though at first it appears to have some uniformity. The ecosystem supported by the forest has been fragmented, altered and destroyed.

The tension between uniformity and looseness comes through in the treatment of the wood. Some of the pieces are stamped with a stenciled pattern, while in works like “Urban Sprouting”, the wood that frames out the piece is adorned with a hand-drawn scrawl of a marker.

These footprints emulate the marks we leave on our surroundings. They may be from systemic issues that present as patterns and are often the result of a deliberate effort or they may come together organically by individual ambivalence or carelessness.

“Urban Sprouting” also adds the looming question of how communities are affected by our actions. There are three canvases set in the wood frame with differently abstracted vignettes.

On the left, an interaction between a person and flowers, in the middle Pefung’s recognizable minimalist faces and on the right, a Chagall-like town with dreamy colors.

The three together show us the varying degrees by which we encounter the world: through direct contact, in our self-reflection and amidst a greater scale of our surroundings. These encounters can feel surreal, primitive, intimate or lonely. The scrawled border highlights how our impact creeps into each of these moments from the drought that kills your plants to cities that build up where forests used to be. 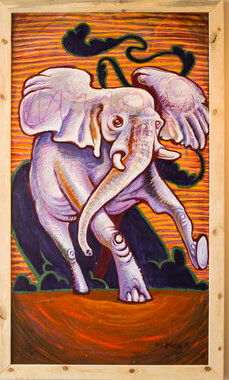 And as is always with Pefung, there’s an elephant in the room. In “The Arrival” the animal barrels toward us on such a large scale that it hovers over the viewer. It is slightly ominous as it knows we’re considering its disappearance, though the vibrancy of the colors and lines gives us a sense of rhythm that wants to push through the dim outlook.

The details that comprise the wrinkles and shadows compared with the graphic quality in the eyes and ears remind us of the reality of this animal even when we’re thinking about its fate in an almost abstract way. The elephant in the room is a literal elephant but it is also the impending reality that we don’t want to face—that we’re responsible for its possible extinction.

You can see Gerard Pefung’s work at Ally Poyner Macchietto, 1516 Cuming Street through June 21. Pefung works with an organization called Save The Elephants. You can find out more about them at savetheelephants.org.