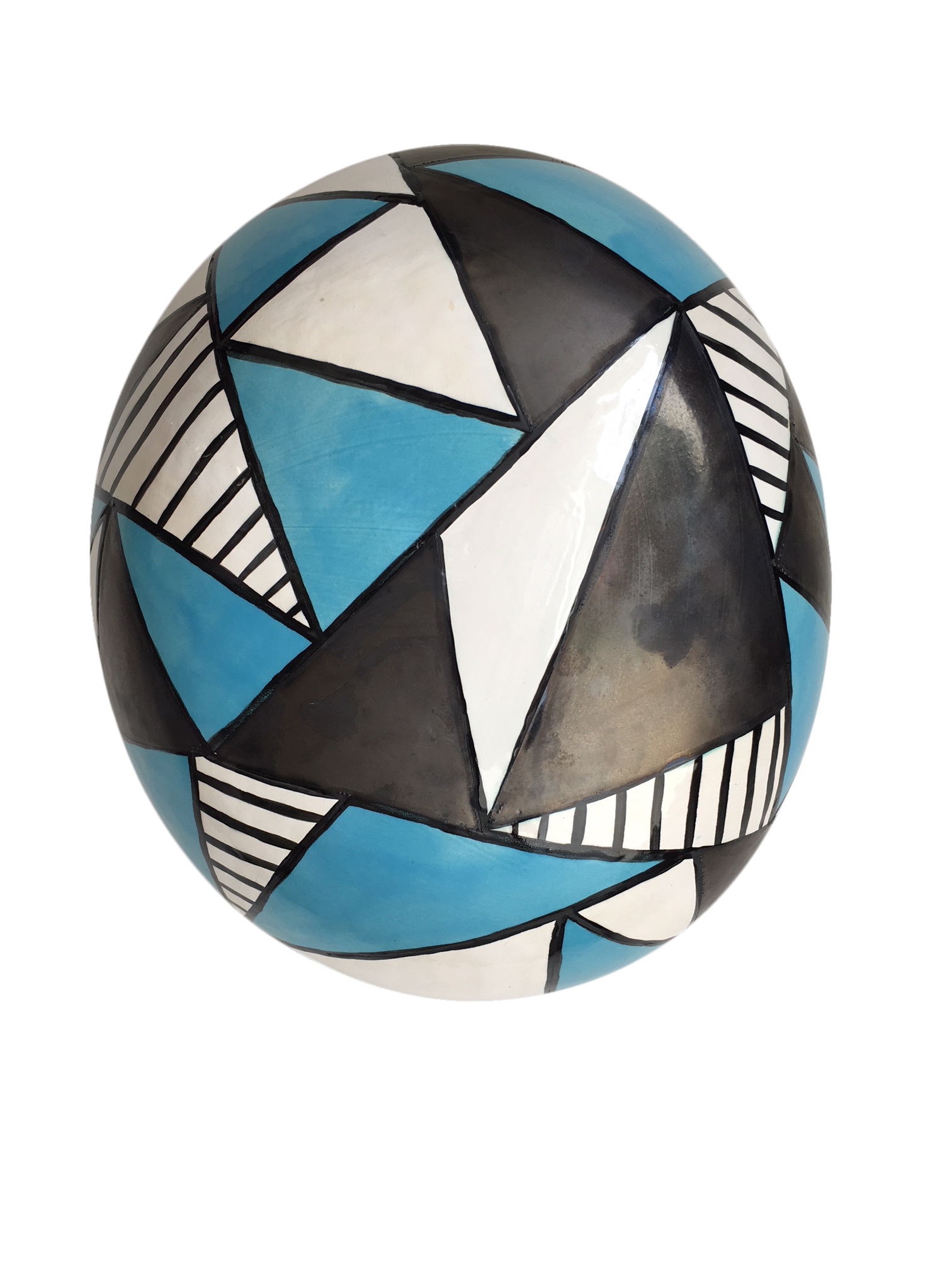 “Something aesthetic, something frenetic,

Playwright/lyricist Stephen Sondheim had it right. When it all seems like the world’s going to hell in a hand basket, laughter is still the best medicine, even if only temporary.

Apparently artist Larry Roots, director of Modern Arts Midtown, got the message as his prescription for the latest wave of global bad news and blues is the venue’s July exhibit, The Jellybean Show,offering three specialists who know how to dispense a creative chuckle or two.

The Jellybean Show,which opens Friday, July 6, features mainly 3D work from Iggy Sumnik ably assisted by Bob Culver and Jamie Burmeister, each of whom a renowned practitioner in restoring our “humoral response” to whatever ails us. Roots thinks it couldn’t come at a better time.

“This show is maybe contrary to current sentiments surrounding us today,” he said. “Sentiments of anxiety, dissenting opinions and conflict need a boost with the simple idea of what color, humor and just plain fun can do for our spirits.”

To that end, Sumnik offers 50 wall-hung 3D ceramic “Jellybeans” to set the mood with every color and pattern “for the selective sweet tooth.” Culver returns with 3D cutouts remembering light hearted heroes and icons of witty delight. Think Rocky and Bullwinkle and the cherry Mustang convertible Roots said.

Meanwhile Burmeister invades the gallery with his mini-guys affectionately known as “Vermin”. These bronze and clay figures appear in installations on and off the wall that actively involve them in humorous scenarios.

If the above sounds light and airy or merely suitable summer fare, know that much of the trios’ work has an edge or is cleverly disarming, often fitting their persona, character and personality.

Humor not only unites all three artists here, along with color and more than a little fantasy, it allows for a little role playing and manipulation, even social commentary, all in a very entertaining and engaging fashion. They are artists after all, and since comedy often requires a mask…think clowns and mimes…each enjoys their well-crafted persona. 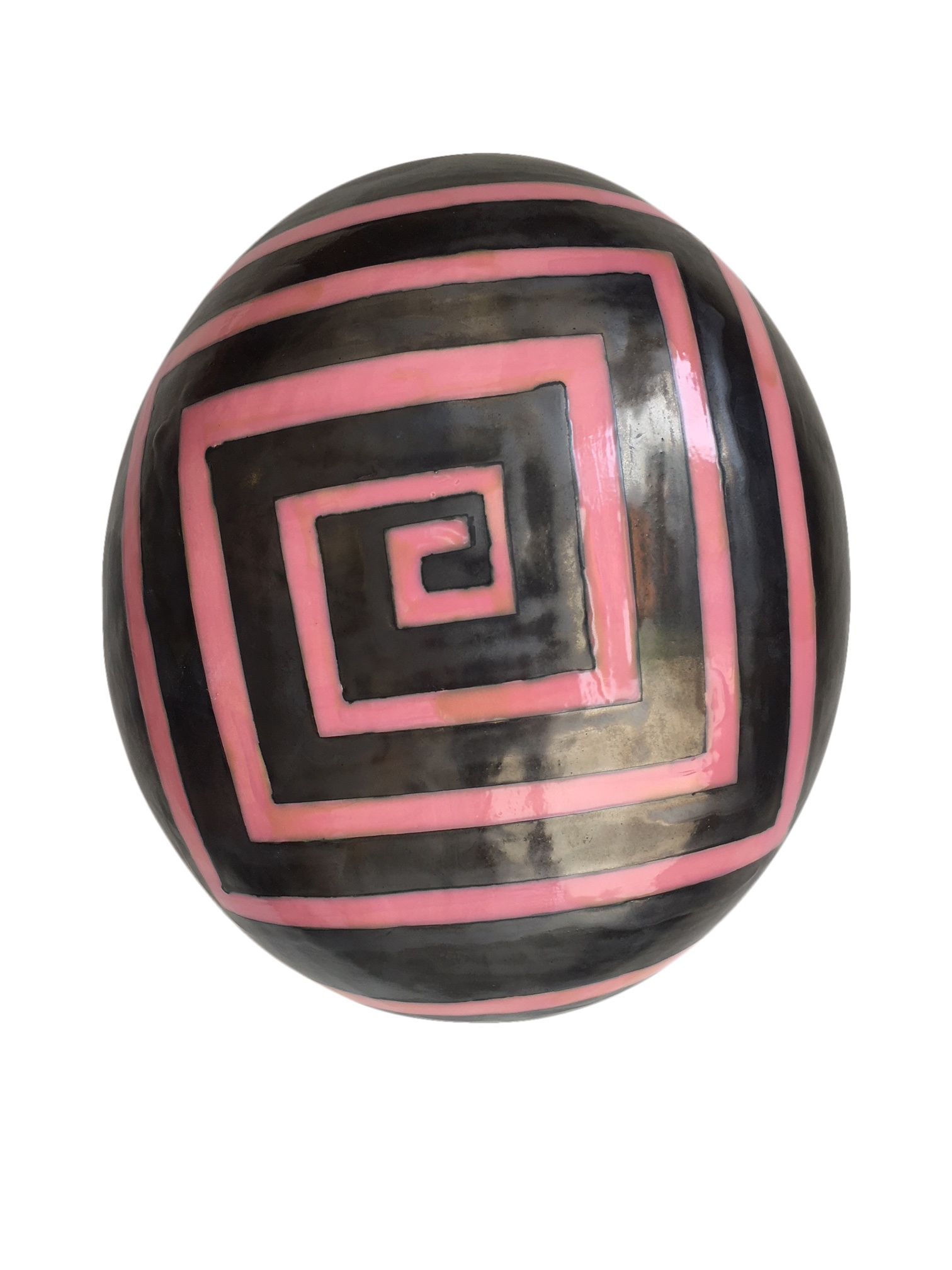 Collectively, Sumnik, Culver and Burmeister are tricksters, first tickling a funny bone before giving “a wink and a nod” or at least a double take. Not that their social commentary or satire is heavy-handed. Yet even more relevant than their general humanism are their muse and aesthetic. Let’s examine each as well as their mask.

Of the three, consider Sumnik as the jester or prankster. After all, before opening his own successful studio, first in Omaha and now in Detroit, he learned his stock and trade in the court of Kaneko (Jun) among real royalty. Sumnik served a three-year apprenticeship before the Master, learning and honing his ceramic arts and craft before adding a puckish point of view to his best work.

Crediting humorists/artists Gary Larson and Keith Haring, Sumnik says, “My imagination and the fictional scenarios it creates is my most consistent source of entertainment and laughter.” Prime examples from his career include his 3D renderings of labels and brands such as the Nike Swoosh, and security devices such as surveillance cameras that intrude upon art, nature and privacy. Each with an iconic songbird perched on top.

Sumnik’s commentary is artful and subtle, often relying on repetition, which he says, is used “to study concepts further and to create individual objects in the same family. These elements embed a context in my work and create a visual style that is both spontaneous and technical.” His “Jellybeans” are a shrewd case in point.

“If the ceramic pods I make were called pods, rocks, stones, orbs, beans or anything else, I think the piece would be less fun,” Sumnik admits. And for the artist less popular as well, no doubt. When was the last time one enjoyed just one jellybean? His “eye candy” is no exception. 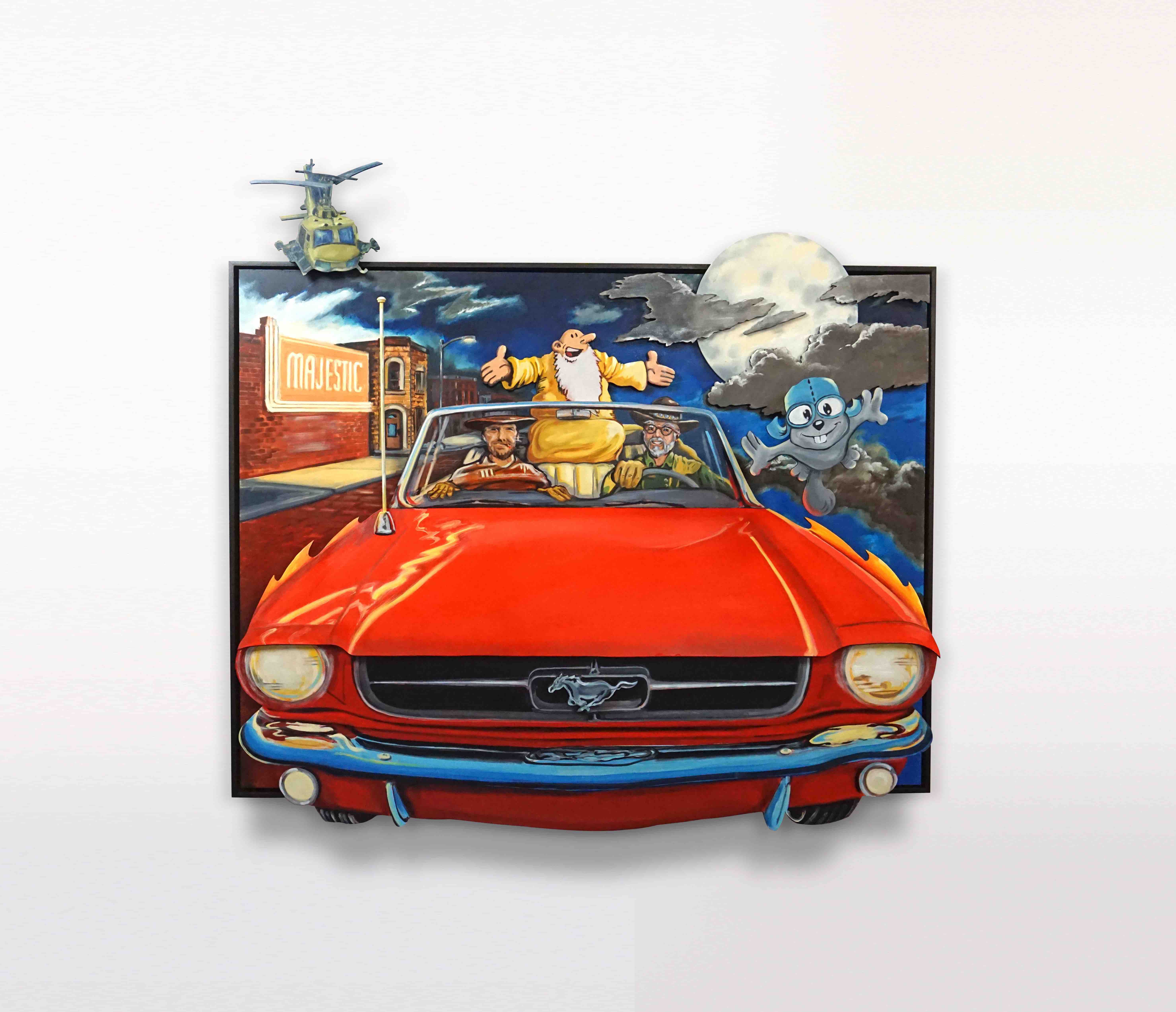 If Sumnik is the jester, than Culver is the consummate ringmaster creating as well as introducing a carnival of characters, including his own, that work on many levels. Inspired by his own apprenticeship with Red Grooms, who gave him his sobriquet “The Nebraska Kid,” Culver created his own cast of 3D cutout characters that reflect his personal take on contemporary society and culture. However, his satirical pastiche has more of an edge than that of Sumnik’s.

“The insanity in Washington is dark and scary which doesn’t give me much to laugh about,” Culver said. “However, being a life long wisecracker and tease, it does give me material to create visual messaging using ironical or satirical imagery to make a point, which I believe increase the likelihood of making the point with the observer.”

Culver has been at it for over five decades. From the Lone Ranger to local hero, the late philanthropist Dick Holland, among others, his cast of stand-up comics demonstrates that what the world may need most now is a good laugh.

“Humor is a key basic ingredient for successful two way communication which is important to me,” Culver said. “I enjoy the audience understanding the creative concept and being a little entertained with my work.”

Burmeister, occupying the most detached perch of all in this three-ring circus, is equal parts sorcerer and more currently puppeteer. This multi-media artist has long created motion-activated, Rube Goldberg-type contrivances of his own device left to work on their own via audience participation. Much to our amusement whether we get the joke or not, often at the expense of society and pop culture. 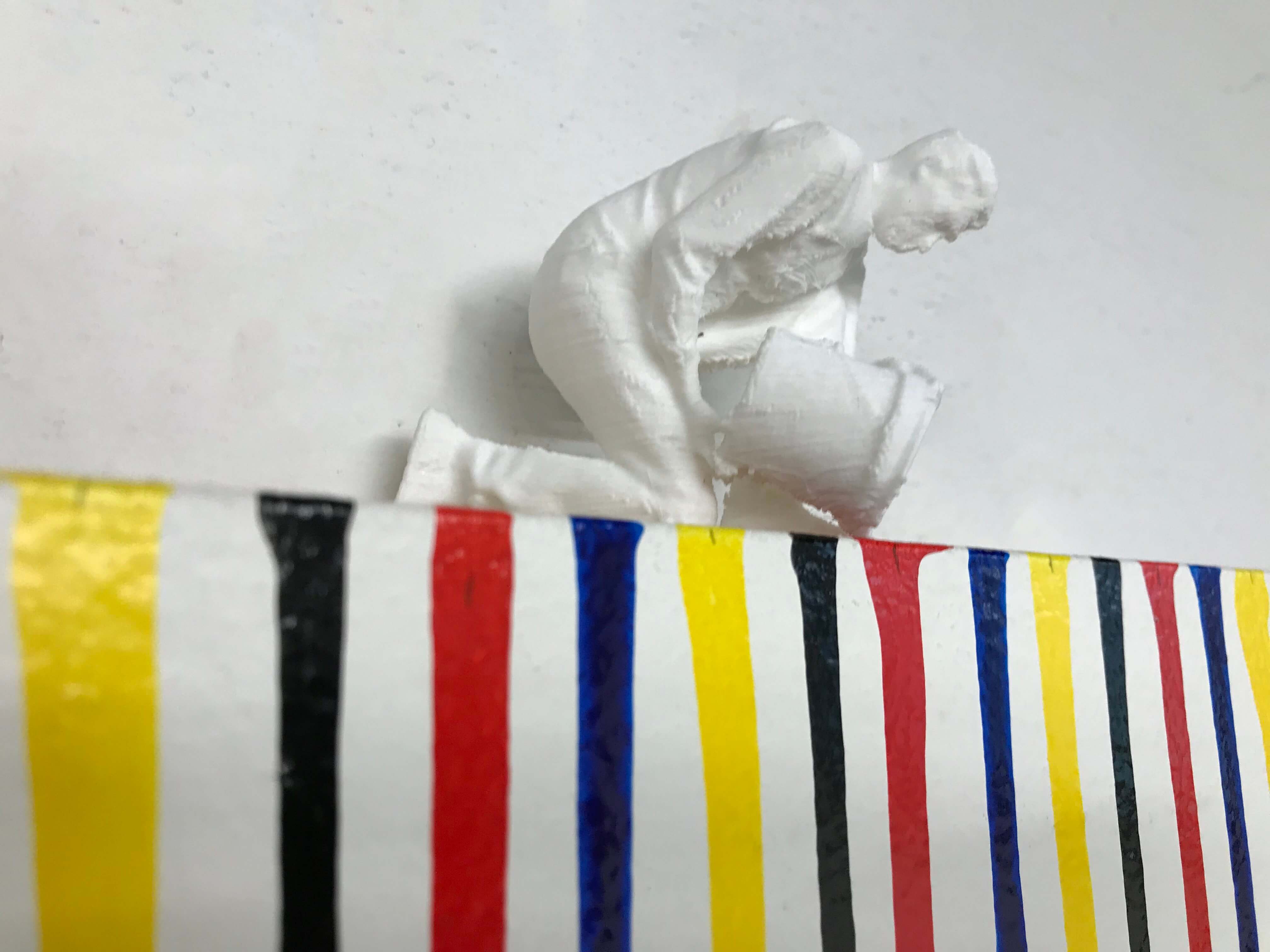 The artist has said that he places common everyday items in situations that give them characteristics of human behavior. As such his work serves as “metaphors for various aspects of the human condition.”

Lately, the audience has played a bigger role via his many so-called “vermin.me” installations in miniature as seen in this exhibit.

These are “everyman” characters in bronze and clay who as the name implies can be a nuisance to society or more likely to themselves. Yet, Burmeister’s isn’t a harsh depiction; it’s more of a “we’re all in this together” doing the best we can or making the best of the difficult world we live in…but reminding us that we, ourselves, created this world. The artist’s vision is neither harsh or jaundiced nor myopic. This puppeteer is truly empathetic as well as entertaining.

“I am always on the lookout for the humor and absurdity of life as a human,” Burmeister said. “Mostly I laugh at myself.”

As if to summarize this exhibit of all things “Jellybeans,” Burmeister adds, “art that makes people laugh has a basic truth about it. My hope is that humor draws people into my work. Once in they may find something that changes the way they look at things.”