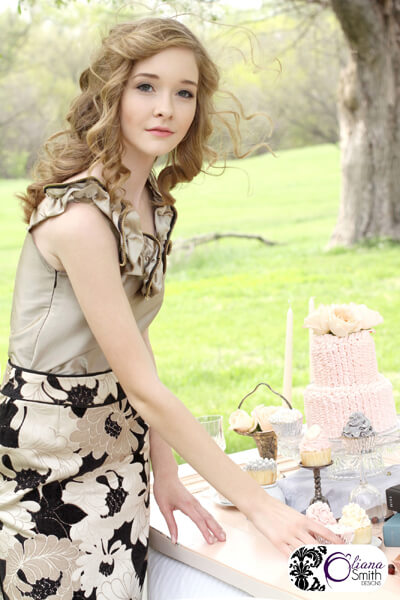 “My last collection was inspired by 1940’s Argentina and I wanted to move on and take this collection into the very early 1960’s, specifically the era just prior to the Mod movement,” explained Smith. “I drew much of my inspiration from a photo Norman Parkinson shot for Vogue in 1959 of a western woman on a trip to a foreign land; it exhibited a kind of exotic elegance.”

No stranger to design, Smith was born into a family of Argentinian couturiers. She graduated from the Salt Lake City Fashion Institute in 2010 and debuted her fall 2011 collection during Omaha Fashion Week to superb reviews. Her designs have also been featured in the popular Parisian fashion blog, Making Magique.

Upon meeting the designer at a press sneak peek event, it was evident that Smith has a clear-cut vision for her collection. A large mood board filled with vivid oranges, reds, yellows and blues set the scene, paired with striking black and white prints.

The board displayed photos of everything from actress Sophia Loren, to samples of a custom elephant print to an Indian palace. “There is a palace in Jaipur called the Palace of the Wind,” explained Smith as she pointed to a photo on her mood board. “Many of the doorways and rooms are decorated with scallops, which I included a lot of in my collection.” The designer went on to list ostrich feathers and leather as some of the rich detailing that event attendees can expect to accompany her custom prints and bold hues.

Resembling the trip that inspired her, Smith related designing this collection to a voyage. “You go through this journey; the process of a designer is so intimate. My collection is a part of me and it’s so satisfying to actually sketch something and see it through to the end”.

Produced by STEP Group, Eliana Smith Presents the Fall 2012 Womenswear Collection will take place on Saturday November 19th at Nomad Lounge, located at 1013 Jones Street in the Old Market. General admission tickets for this event are available for $20 and VIP tickets are $40 and include a pre-party, premiere seating and a gift bag. Tickets can be purchased now at elianasmith.eventbrite.com. For more information on the designer, visit elianasmithdesigns.com.

Sarah Lorsung Tvrdik is a stylist, costumier, wife and freelance writer based in Omaha, Nebraska. Her style blog can be found at fashflood.com.