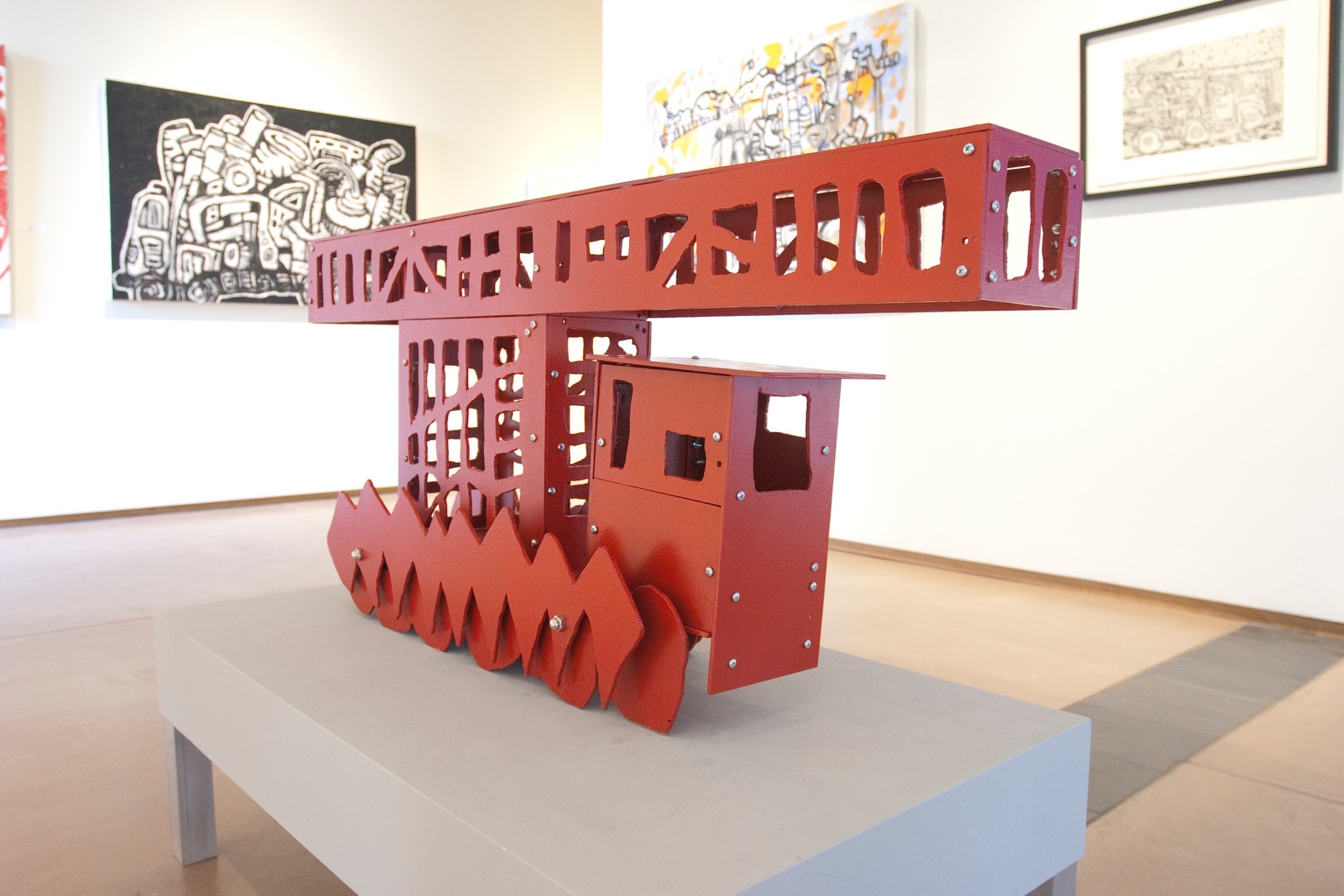 Lovers of contemporary art can be demanding, contradictory sorts. We enjoy new trends in visual expression and ask our artists to show us the freshest work from their studios. We want to be continually intrigued and provoked, reminded that we live in a dynamic world.

We are ever scanning for undiscovered talent — emerging artists who will redefine some genre or completely invent a new one. At the same time, we like revisiting those whose art has interested us for years. With mature artists in particular, our expectations are higher, both wanting to see signature style reaffirmed and hoping to see new avenues of inquiry. In short, we want our expectations both met and exceeded.

The occasion for the exhibition came as the result of recently touring museum survey of the truck-themed work of John Himmelfarb that closed last month at the Sioux City Art Center. To pieces selected from that exhibition were added several shown in past MAM shows, a set of new sculptures and a few other seldom-seen gems.

Chicago-based Himmelfarb has moved fluidly throughout his career among many aspects of art production. He is a painter with a draftsman’s penchant for line; he is a sculptor in wood, bronze, ceramic and steel; he is a printmaker in lithography, screenprint and etching. 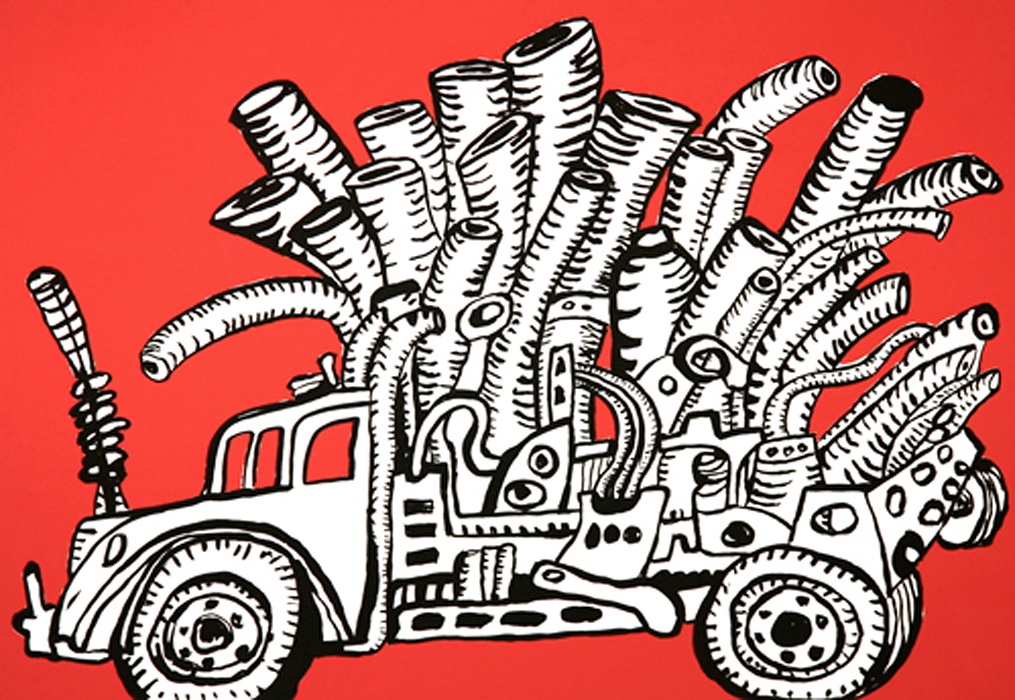 Himmelfarb also tends to work in years-long cycles using particular themes as his springboards; since 2005, the truck has been his motif of choice. In it, he’s found a vehicle for a distinct form of still life arrangement as his vintage rigs carry around a precarious pile of cubes, spheres, cylinders, cones, and pyramids masquerading as engines, pumps, cranes, canisters and the like. His works combine invention and imagination in a typically colorful, jaunty manner, and nearly always elicit a smile.

Among the new works on view, “The Ink Truck Is Here” is a large woodcut on canvas showing the exaggerated front end of a truck with its deeply treaded tires, massive grill, curved hood and big round headlights. Seen from this view, the truck takes on the characteristics of a face of a fearsome creature bearing down on the viewer. This anthropomorphic quality has been hinted at before in his work, but perhaps never so explicitly.

New powder-coated steel sculptures, the result of a collaboration with Omaha artist Les Bruning, are also on hand. They are lighter and leaner than Himmelfarb’s earlier bronze and ceramic sculptures, which emphasized density and mass. “Deadline,” with its glittery silver coat and thin, elongated forms nearly flying out of the truck bed, feels like a child’s erector set was being carted off in a toy truck. Himmelfarb’s translation of his linear impulses into three dimensions seems increasingly ecstatic.

Ferguson’s followers have come to anticipate this artist’s experimentations with media, which have encompassed everything from bronze, steel, glass, twig, wire, hair, paper, found objects, ink and charcoal utilized in the service of installations, large and small-scale sculptures, drawings, photographs, and even opera sets.

Though her materials are varied, Ferguson’s works are bound together by her curiosity about transformation. It is evident in the way she has combined decorative and utilitarian glass items into dark bronze totems, as well as the way that the back sides of player piano music rolls become delicate abstract drawings with the strategic addition of ink lines joining perforations in the paper. 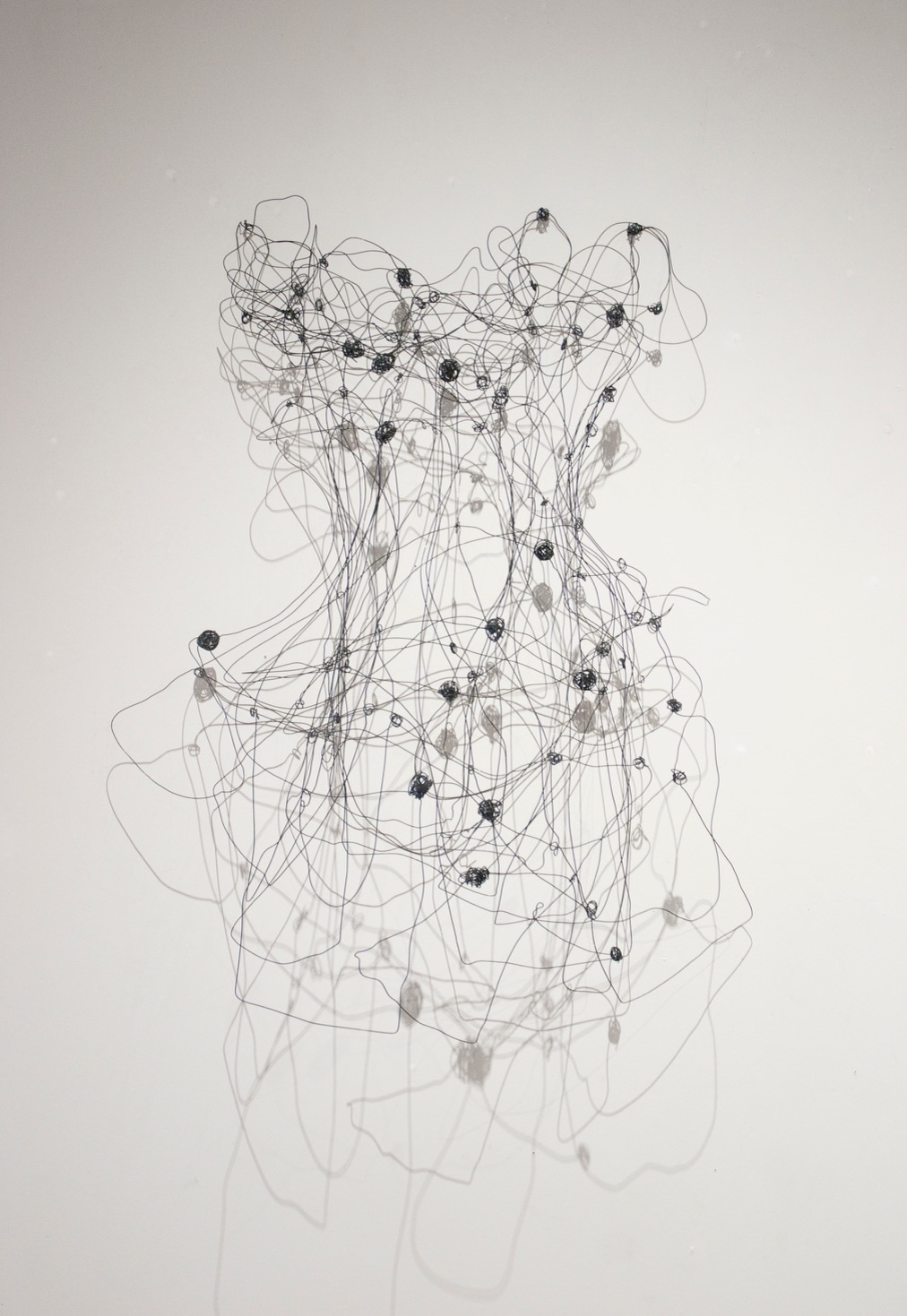 Transformation is symbolic as well as material in Ferguson’s work. A series of new wall reliefs in wire become drawings in three dimensions, enhanced by the effects of shadows on the wall. As exemplified by the swimsuit-inspired “Janzen,” each is related in some way to the female body and ideals of beauty, a recurrent theme in her work.

Equally at home with an emblematic set of motifs is Lincoln painter Horvay. Her work has drawn inspiration from the built and manufactured found in the domestic environment. Her forms echo swimming pools, patio furniture, saucepans and stand mixers; her patterns derive from printed drapes, linoleum and day dresses.

Horvay gravitates toward optical patterns, which generate a push-pull of suggested dimension within her compositions of otherwise outlined shapes. Overall there is a retro sensibility in her work, as if sourced from 1950s magazine ads and their modeling of family life. Also notable in her more recent work is a gravitation toward creating tableaux — kitchen- and bath-scapes as you will — rather than focusing on single utilitarian objects. It’s contributed to an increased openness in her compositions that works well in counterpoise with hard textured surfaces of her paintings.

Pattern, of course, is essential in the studio quilts of James. It comes in the form of fabric shapes cut and pieced together in the various images printed on each swatch and in the stitched lines that run across the quilt tops. James’ forte, among other things, is in digitally developed and printed cotton, allowing him to control all aspects of creating what are essentially collages in fabric.

A number of James’ quilts from the ‘00s demonstrate his interest in building compositions combining pictorial and abstract elements, many quite disparate in nature. His work has had an increasingly diaristic quality, as evidenced by the “Daybook” themed works. 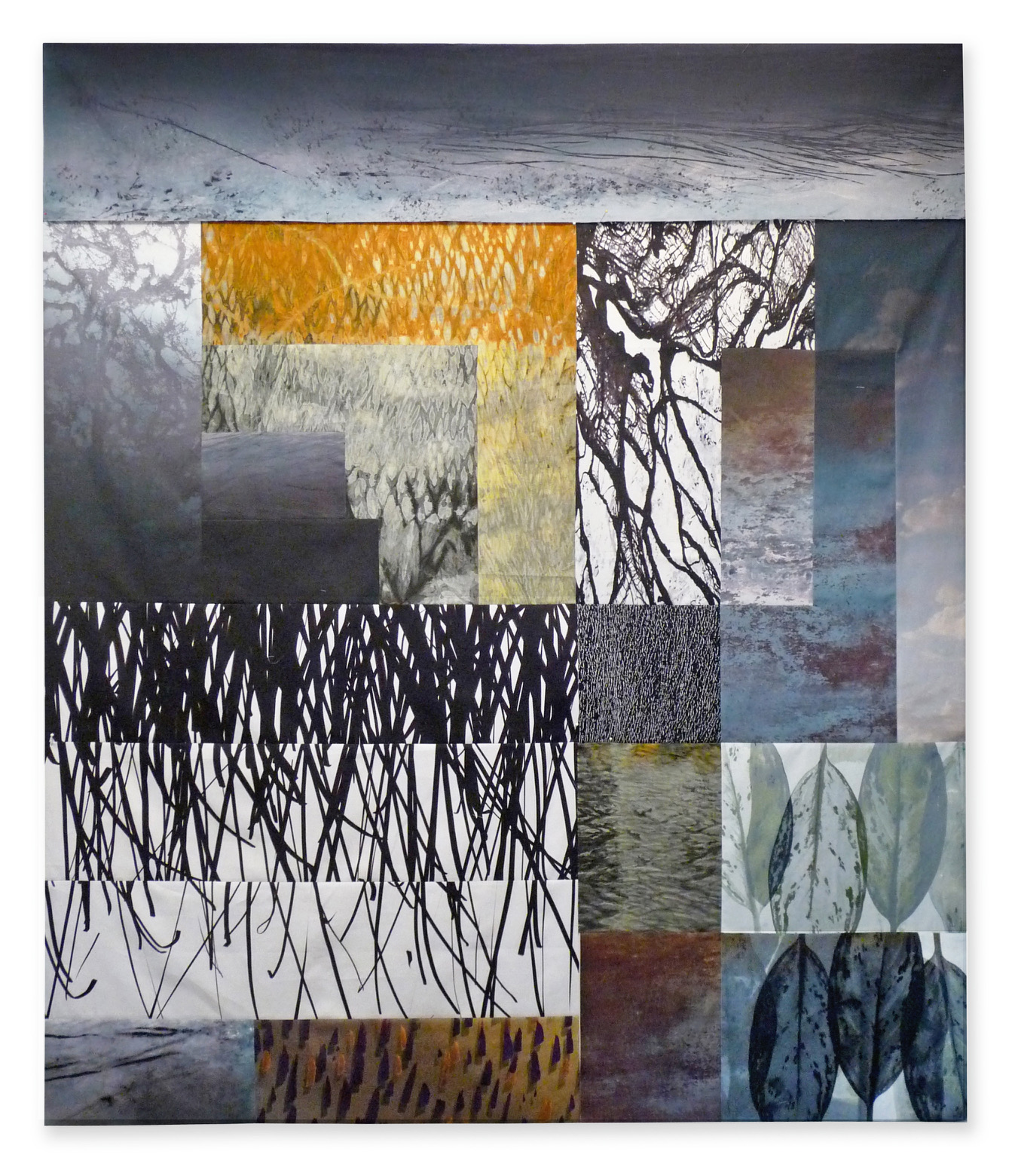 James’ most recent quilts are his most personal. Having taken several years away from the studio to care for his wife as she struggled with dementia, James has returned to producing works increasingly inspired by nature, its growth and change, ebb and flow, as evident in “Each of these Leaves.” Higher-keyed colors of past endeavors have turned to a more close-valued, often monochromatic palette; a greater sense of poetry seems to reside in his juxtapositions of image and texture.

Big, bold statements were never of interest to Burton, who might be described as a color field painter with an eye toward organic abstraction. Working in oil, Burton strives for softly luminescent surfaces characterized by muted colors and gracefully stylized shapes derived from nature. Equally as often, Burton deliberates on geometric form, painting soft floating bands of color pulse on the surface of the canvas.

Examining the changes within her oeuvre, it might be fair to say that they have been evolutionary rather than revolutionary. Differences among her works are subtle but nonetheless notable; a series of small oils on panel here demonstrates the continued flexibility of the stripe form, with its infinite variables of weight, color and interval. 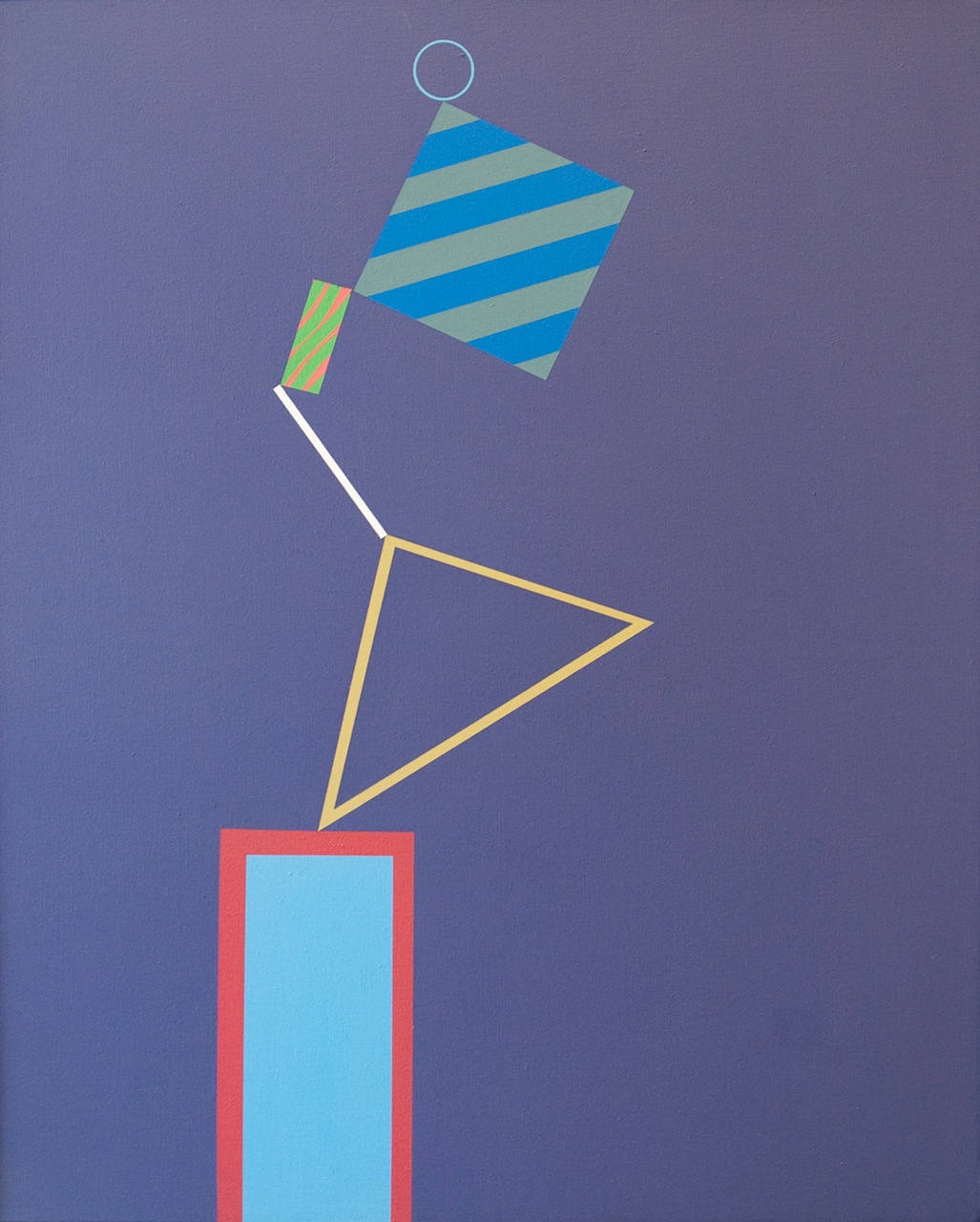 Even more measured are the changes within Hill’s compositions. By choice, Hill is no longer a prolific painter, so MAM is displaying works dating from 1983 to the last decade. Clearly Hill has remained firmly allied to his square-format, brightly colored hard-edge acrylic geometric abstractions.

Hill’s compositions are variations on qualities of balanced form, edge and pure color, as tilted squares, rectangles, triangles, and the occasional delicate curve engage in delicate acrobatics. A style once pioneering, it now feels comfortably retro, a survivor of the vicissitudes of tastes and trends; since Hill rather disappeared from the radar some time ago, it has been refreshing to be reminded of his work.

Finally, Dinsmore once again displays aspects of an expansive repertoire built of wide-ranging interests and experiences. Based in Lincoln, he also maintains a studio in Maine, and the light, life and landscapes in those locales are favorite subjects for landscapes, domestic interior and still life paintings in his loosely brushed, casual and sunny attitude toward modern figurative realism. 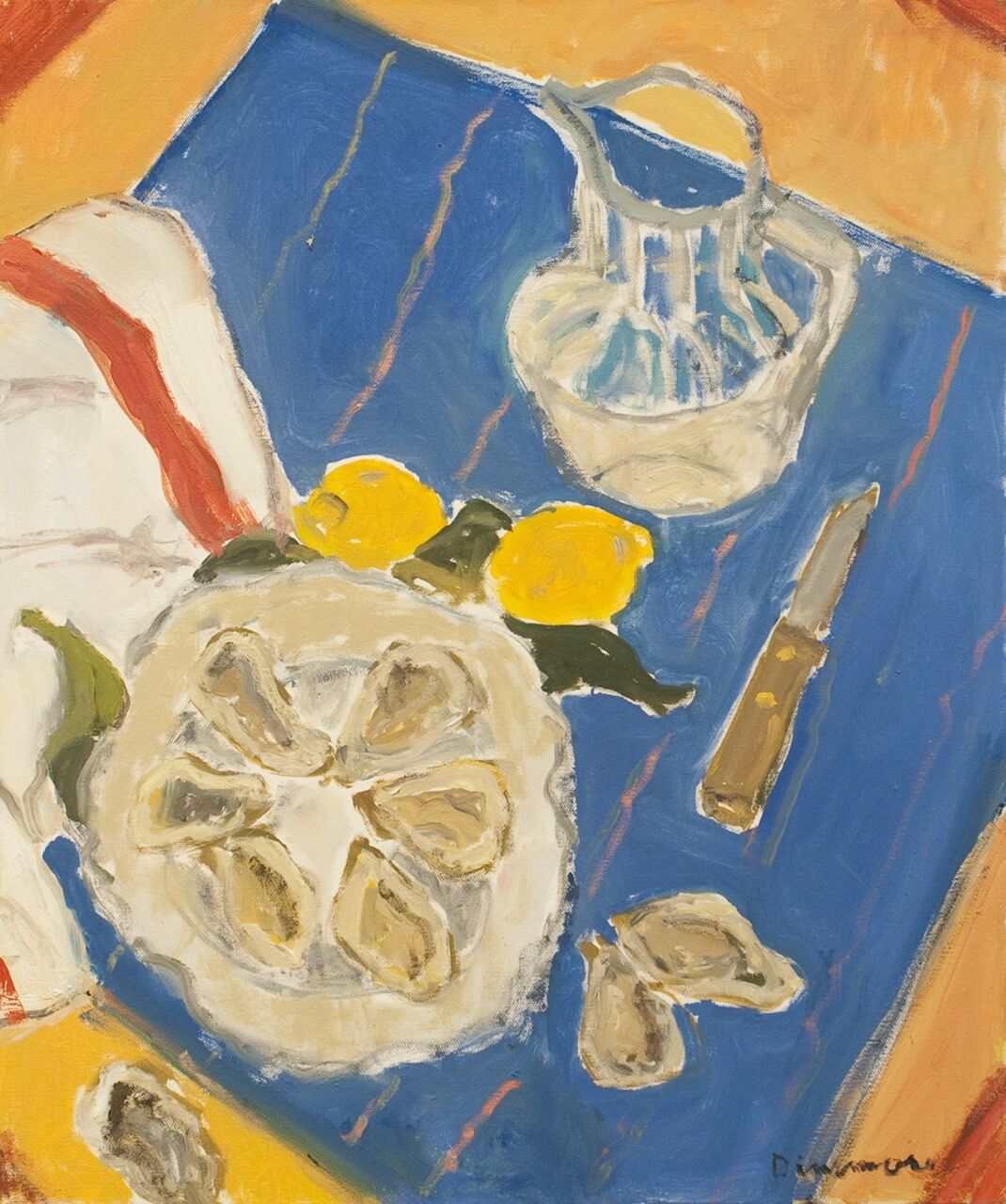 Some of Dinsmore’s newest canvases in the show are painterly excursions into pure abstraction, with translucent panes of luminescent color layered on the canvas in a manner recalling (perhaps too directly) Richard Diebenkorn’s light-filled “Ocean Park” series.

In all, Legacy hits that sweet spot between fresh and familiar by doing what Modern Arts Midtown has really done for years — provide a space for some of the area’s enduring visual talents to remain a relevant part of the conversation.