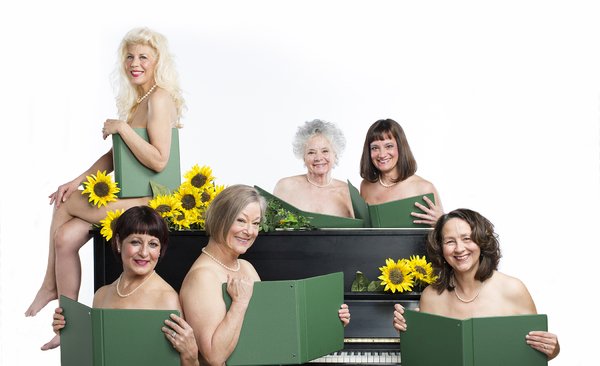 You might expect, given the fame of the film that preceded the play, the most memorable moments in Calendar Girls at the Omaha Community Playhouse to involve the middle-aged ladies undressing for their fund-raising photos.

Instead, the nudity is so discreet that the “no front bottoms” demand by the least shy model (Jessie played by silver-haired Sue Mouttet) could have added “no front tops” and “no behinds.”

If you wanted to try a Groucho Marx leer with a waggle of his cigar you might settle for saluting Debbie Cline’s bare back as she poses on a piano bench.

With the help of Kathy Wheeldon as Annie, Markey and director Susan Baer Collins created something lovely and touching in a few scenes that saw John first arrive as a robust man who enlivened the ladies’ get-together with sunflower seed cocktails, then sadly shared a doctor’s report on his cancer and finally slumped in a wheelchair, now hairless but still able to muster a small smile.

He succumbs but sets the stage for the women to find the courage to create a calendar. They set out to buy a settee for the hospital, and soon accomplish much more.

The director and her merry band reach another goal even earlier: led by Kim Jubenville as Chris, they quickly establish the fact that they’re bored by the usual programs suffered at their Women’s Institute meetings.

The lecturer (Ruth Rath), who last held forth on the subject of tea towels, returns to orate about broccoli, so Annie implores Chris not to laugh at the poor woman. That fails when she strains to connect broccoli with James Bond.

So the gals share a rebellious strain, but aren’t so bold that they immediately jump at taking their clothes off for the calendar proposed by Chris. Oh, Celia, the sexy one played by Karrin Dignoti, might like the idea, but shy Ruth (Julie Huff) needs alcohol to shed her inhibitions and Cora (Debbie Cline) worries about her status as a single mother.

For contrast, of course, their local Women’s Institute president (Stacie Lamb) is flat out opposed to the idea. Chris and Annie take it to the WI conference in London, and get rejected again. (In real life, they didn’t face such obstacles, but drama requires conflict.)

All this unfolds on a stage dominated by a backdrop painted by scenic artist Janet Heath, who provides a rolling Yorkshire countryside, the setting for the true story, the film and the play. It adds to the feeling for an otherwise ordinary group of middle-aged women bonding on behalf of their friend Annie in memory of her husband.

Drama also requires, given that the calendar-posing problem is solved in Act One, some Act Two conflict. The new tension grows from the feeling that the enthusiasm Chris shows for their celebrity is no longer linked to their noble purpose.

I’m not sure how well all this comes across. I had no intentions of polling the preview night audience, but ran into a friend who brought a busload of seniors and he offered that they were struggling with the English accents, a problem shared by my three companions.

For example, I had no clue that the calendar poses represented WI activities until informed by the daily’s review.

Whether the reviewer caught more of the dialogue or learned that from advance research, I don’t know. This problem didn’t keep me from enjoying either the story or the performances, but one hopes it’s less of an issue for future audiences.

Calendar Girls runs through May 8, 7:30 p.m. Thursdays-Saturdays, 2 p.m. Sundays, on the Hawks main stage of the Omaha Community Playhouse, 6915 Cass St. Tickets, $36 for adults, $22 students, with lower prices on Wednesdays, are available by calling 402.553.0800 or visiting omahaplayhouse.com.