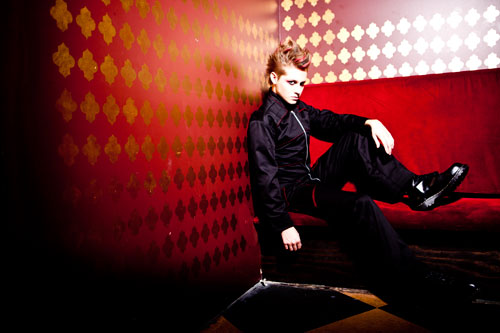 Dominikat clothing continues to make a name for itself amidst the lacking market for Goths and punks while preparing its classical look for the goth ball this year.

Lee Cunningham was determined to make his own clothes when current fashions, trends and materials just didn’t suit his palette.

Cunningham pointed out it’s difficult to separate fads from what is here to stay, but he suspects the steam punk look is just passing by while the cyberpunk look may stick around.

So how did Dominikat surface? Omaha’s Something Wicked Goth Balls presented the perfect outlet to debut their success. Cunningham presented what was a side project of clothes back in 2004’s goth ball. Soon after, Cunningham met Barry Dunne, the entrepreneur and business brains of the operation. “We’re a bootstrap company with no investors,” said Dunne. This may help explain why the company has found success in Omaha’s alternative scene.

Dunne and Cunningham noted that Dominikat is more than happy to customize sizes and designs for every customer. Cunningham explains how it’s so hard to find pants, shirts, corsets and accessories all in one place with stores like Hot Topic catering to current trends. There is also the issue of clothing quality, which many stores in the mall fail to succeed in.

Dunne and Cunningham have been partners since 2009, and the business has gone from an at home project to flourishing in an actual business space near 80th and L.

The partners have no real plans of opening an actual store because everything is online these days. And as long as they can get the orders straight, which they do, it doesn’t seem to matter since business is business.

Making clothes takes inspiration and Cunningham shared a bit on how the process works. “I look at the world around me and at other people’s art. I see what’s appropriate for this year and try to let it be organic.”

The challenges Dominikat faces mostly involve reaching people in Nebraska, many of whom do not flock to these types of apparel. “You see a need for Husker gear, and that’s definitely not where we’re coming from,” Dunne said.

Yet Omaha is growing and “goth nights” at bars like the House of Loom are starting to give people a chance to have some drinks and dance to classics like Joy Division or the Sisters of Mercy with their friends. Dunne added, “It’s giving people a home and somewhere to go and socialize.”

Dunne made sure to emphasize that Dominikat is a supporter and presence on these nights, but definitely not out to make it about profit. Dominikat is sincere in their dedication to brightening the alternative culture in the Omaha area.

The two realize they need to appeal to older members of the community who need more refined looks and professional clothes to maybe wear to work. They elaborated that everybody in the community can’t dress like they’re in their 20s forever.

Gothique: Something Wicked Goth Ball will take place on Nov. 3 at the Slowdown at 9 p.m. Cunningham said to expect a Victorian look this year, so lace, corsets and frilly clothes can be expected. The partners stated a few surprises would be in store, so more on that at the event itself.