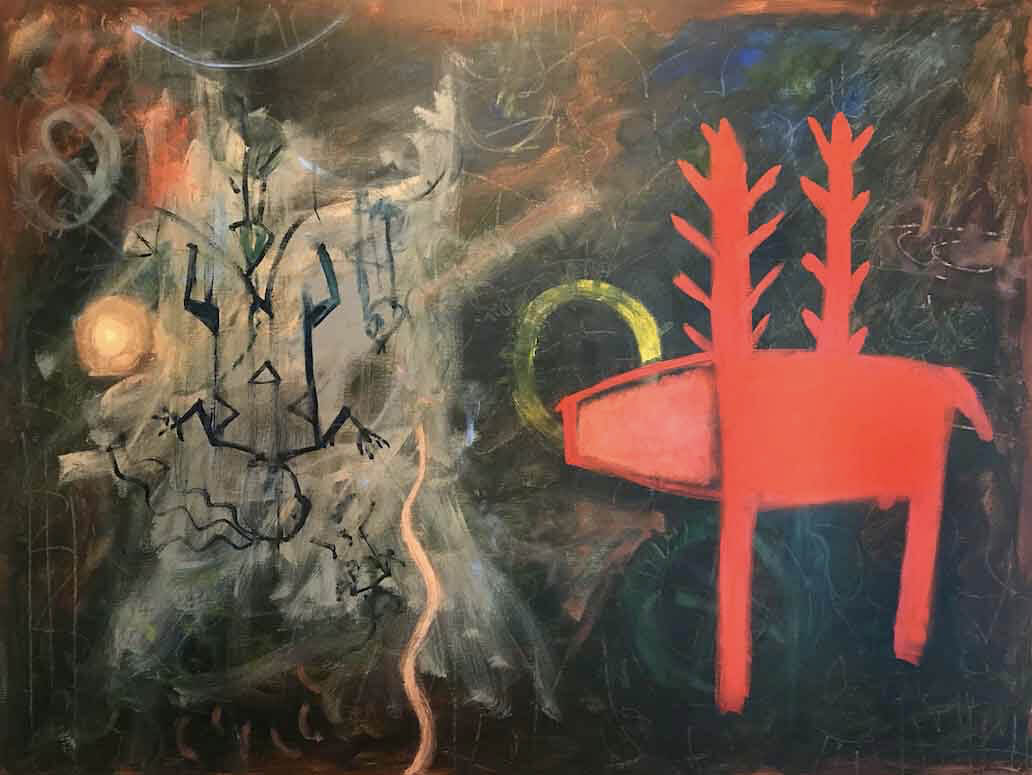 Working with acrylics and colored pencil on paper or mixed media on canvas, several pieces are a continuation of what he’d been building on for some years, while living in Chicago and then New Orleans.

These paintings consist of inter-locking single-colored shapes in a brightly hued, hard-edge and layered design style. They strongly suggest the modern city with crowded buildings and streets, horns blaring and the constant din of traffic. 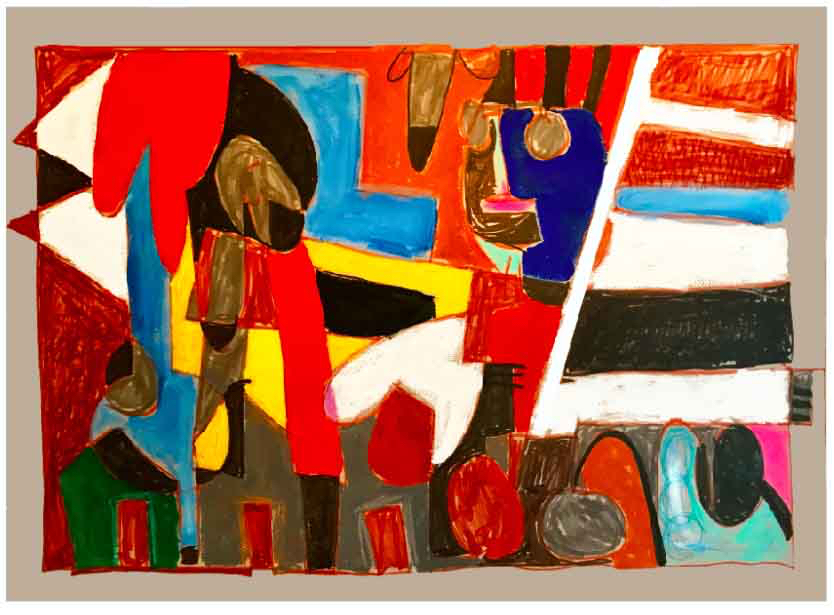 Both works, “Billy’s Hand” and “Billy’s Hand Returns” are examples of this approach and idiom. The latter painting, “Billy Returns”, seems a step up to a more elegant composition with more clearly demarcated colors and stronger iconic shapes, as well as a composition that seems to be more thoughtfully organized.

Engler states that these two works are part of a continuing reflection based on his fatherless childhood spent in poverty. This seems a healthy way to bury a bad memory, as the “Returns” piece seems to indicate a much surer, more successful presentation of interlocking shapes and colors—and hopefully, a letting go for the artist.

The large “Return to Omaha” piece seems to act as a transition work between the two main groupings, which consist of cityscapes and a second theme of Plains Indian references that are in the exhibit. 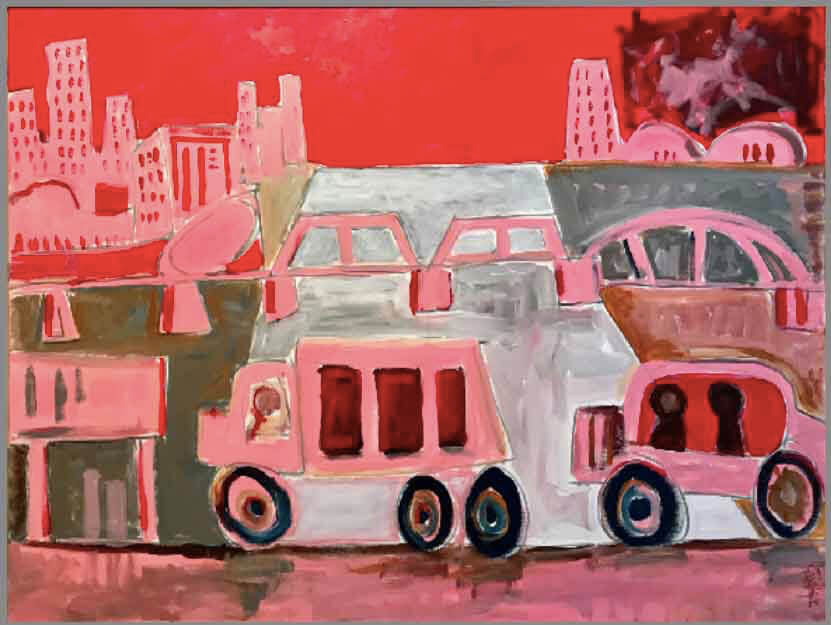 The softer colors and more “orderly” progression of vehicles in pinks and reds moving over the Aksarben Bridge from Iowa indicate a more pleasant atmosphere for people in this city. The artist has stated that he feels the art scene here is less competitive than in either Chicago or New Orleans, as well as this city being more friendly generally.

The paintings that reflect Engler’s recent interest in the art of the Plains Indians iconography appear to be the richer work to this viewer. The cacophony of the cityscapes has dissipated into a more nuanced layering of the composition with the soft richness of dark to light colors into a more cohesive field approach.

“The Guardians Return”, which includes two bright blue figures in a dark background, along with softly shimmering orange and yellow shapes against a brown ground and with a golden sun in the sky seem to infer a promise of peace—which our world today could certainly use.

Another strong composition is seen in “River Wedding by the U.P. Bridge”, again with softly layered approach used with two light figures on the right of various symbols and shapes on a light-filled warm brown ground.

One of the strongest of the Plains paintings is “Stag Party-Take that, Renoir”, replete with a stylized orange stag with tree limb-like antlers, along with markings which seems to suggest an honoring of this rich and lost Midwest culture.

Engler’s homage to Marsden Hartley and Grant Wood called “Sharing a Cottage in the Loess Hills”, seems the “Gestalt”, or final statement that completes this exhibit. It is well composed, with rich colors and elegant shapes. Again, we enjoy lovely oranges, gold and blue shapes against darker volumes to give deep dimension to the iconic markings here and there.

Many readers may know a bit of the history of the artists referenced in this series. Marsden Hartley, (1877-1943), is probably less well known in today’s world. He was disregarded in America after his death and the end of World War ll because of his use of German military symbolism.

Born to English immigrants in Ohio and raised until age 16 by an aunt before rejoining his father and stepmother, Hartley traveled widely in Europe, and was long fascinated by the pageantry of military customs. He used the military medals and symbols in a Cubist approach in his paintings.

Iowa Regionalist Grant Wood, (1891-1942) is still beloved today for his images from Iowa farm country, including “American Gothic” (the farmer standing next to his daughter with a pitchfork to stop any suitors from taking her away in marriage, when he wanted her on the farm, taking care of him). Wood has long held a place of honor in the Midwest, for his reverent depictions of the common man and woman.

Engler’s homages to other artists are his way of acknowledging their influence both in his aesthetic and point of view.

Engler earned degrees from the University of Illinois at Urbana and the Chicago Divinity School, where he studied art and literature. He continues writing poetry, and has lately produced a chapbook of his writings, with a Plains Indian-style painting on the cover.

He has been making art for most of his life. While living in Chicago, he was featured in an Oak Park Gallery and has his work in private collections in Chicago. The Historic Collection in New Orleans has photographs and drawings of his work.

Artists Bob Matthews and Rachel Droppersare currently on display at Connect Gallery, 3901 Leavenworth. For details and gallery hours go to connectgallery.net or call 402-991-8234.