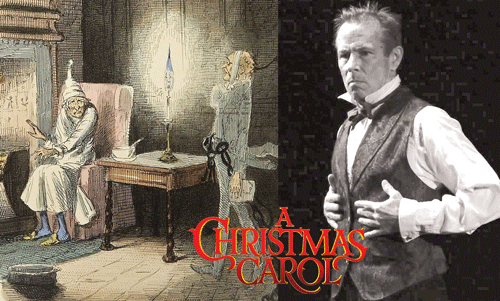 The Charles Dickens classic A Christmas Carol has long haunted actor-writer-director John Hardy. Though ghosts have yet to visit him ala Scrooge, the story’s held an enchanted place in Hardy’s heart ever since he got his Equity card acting in a professional stage version.

Much theater work followed but he soon tired of others dictating his artistic life and took creative matters into his own hands. He’s since developed a pair of one-man shows he now tours nationally, including a solo rendition of Christmas Carol. He will perform his adaptation of Carol at the free Nov. 14-December 13 Joslyn Castle Literary Festival, “Dickens at the Castle.”

The festival includes lectures, concerts and other Dickens-themed events. But Hardy’s one-man Carol stands apart. In his energetic show he assumes more than 40 roles across a spectrum of Victorian and Industrial Age archetypes.

The well-traveled Hardy is no stranger to Omaha. He performed his other one-man play, Rattlesnake, here. He directed Othello at this past summer’s Nebraska Shakespeare Festival.

Able to pick and choose his projects, he’s reached a golden period in his performing life. But getting there took years of searching.

This native of Texas grew up in New Jersey and got bitten by the theater bug attending plays in New York City. He studied drama and stagecraft under his muse, Bud Frank, at East Tennessee State University. He no sooner graduated then went off to do the starving acting bit in the Big Apple, making the rounds at casting calls and booking work on stage and screen. A stated desire to create “my own opportunities” led him to Calif., where he co-founded a theater. Then he earned a master of fine arts degree at the University of Alabama, where he started another theater.

He soon established himself a director and acting coach. Once fully committed to following his own creative instincts, his original one-man play, Rattlesnake, emerged.

“You know how it is, you come to things when you come to them,” Hardy says. “Freedom explains all good things I get. Man, there’s nothing like liberation.”

In casting around for another one-man play, he returned to his old friends, Dickens and Christmas Carol.

“As much as I had done it, I always felt like there was something else there. I wasn’t quite sure what it was. But there’s a reason why that play is done and why that book’s become a play and become so many movies. I feel like people were searching for it, just as I was, too.

“The other thing is it had a built-in commercial appeal. People have heard of it, it’s known.”

Tried and true is fine, but Hardy imagined a fresh take on the classic.

“I’ve seen one-man versions, but they’re nothing like the one I do. The one I do is not storytelling, it’s not described. Mine is dramatic theater, It’s characters fully involved in this world, this existence from moment to moment. I’ve never seen that in a one-man Christmas Carol. In the others, there’s always a separation – it’s storytelling with a hint of characterization here and there. Whereas mine is moment to moment characters living through this world, which makes it distinctly different.”

The more Hardy dug into the book and play, the more he discovered.

“A Christmas Carol must have a universal thing in it because it never dies and therefore there must be some very human thing that most of us can see in it and relate to in it.”

He believes Dickens possessed insights rare even among great authors or dramatists in exploring the experiences that shape us, such as the transformative powers of forgiveness, humility and gratitude.

“It’s a thrill to have anything to do with Dickens or talk about him. Dickens is just one of those people like Shakespeare that seems to have a window into the human experience that few people have. The more we get to know about ourselves through his work then the closer we get to not killing ourselves and I would like to participate in that endeavor,” he says.

“The psychology of the human being – that seems to be what he has an insight into in a way that is almost never if ever spoken. In other words, what he does is allow characters to engage in living from moment to moment and doesn’t necessarily draw conclusions about it. He doesn’t explain their behavior, he allows them to live.”

That approach works well for Hardy, who abides by the axiom that “you only really come to know a character when they’re engaged in doing    something – forget about someone describing them or they describing themselves.” And therein lies the key I think to A Christmas Carol,” he adds.. “It’s not an accident this story has been made into a play and a movie again and again because it’s so active. Somebody’s engaged in doing something. It’s on its way somewhere a hundred percent of the time. It’s never static. It’s not reflective. It moves past a moment into the next moment and you can’t stop and think about it.”

“Even as a book it doesn’t have that page-long description of reaching for a door handle and turning it and that kind of thing. It’s in the room, it’s taking in the room, it’s dealing with what’s in the room and going into the next room. It never stops moving forward. It really doesn’t take a breath. It lends itself to the dramatic universe as opposed to the prosaic. It’s a series of actions characters do – and that reveals them.”

In his one-man show Hardy is our avatar embedded in the story. He embodies the entire gallery of characters immersed in this fable of redemption. As he moves from one characterization to the next, he seductively pulls us inside to intimately experience with him-them the despair, tragedy, fright, frivolity, inspiration and joy.

“Seeing a person move through that whole thing is even more human,” he says. ‘We see ourselves passing through it as this one human being passing through it. Maybe we are everyone in A Christmas Carol –Scrooge, Jacob Marley, Bob Cratchit – and Scrooge is everyone, too.”

Because this is Hardy’s vision of Carol, he can play the omnipresent God who let’s us see and hear things not in the original text.

Hardy’s well aware he’s doing the show in a place with a special relationship to the Dickens drama. The Omaha Community Playhouse production of Charles Jones’ musical adaptation is a perennial sell-out here and in cities across America where the Nebraska Theatre Caravan tours it. Hardy auditioned for the Caravan himself one year.

“It seems like half of everyone I know in the business has had something to do with the Nebraska Theatre Caravan or with the Playhouse or A Christmas Carol. It’s kind of like six degrees of separation – you’re not far away from knowing someone who knows someone who was in that.”

As for his own relationship to Carol, he says, “I’ve been with that story for a long time.”

His one-man homage kicks off “Dickens at the Castle” on November 14 at 6:30 p.m. A pre-show panel of local theater artists, plus Hardy, will discuss adapting the novel. For dates-times of Hardy’s other performances of Carol during the fest and for more event details, visit http://joslyncastle.com/.