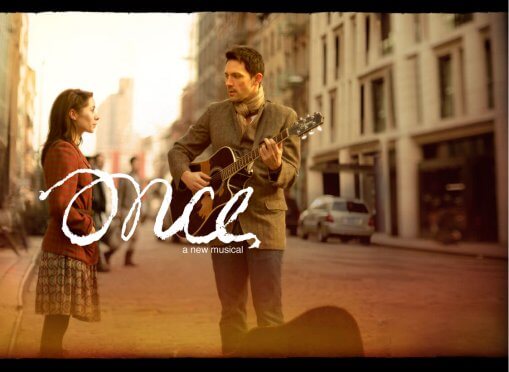 Once grabs the audience before the musical even begins. It lets the more adventurous in the crowd belly up to the pub bar on stage while the cast musicians strike up spirited songs with rousing vocals and speeding fiddles.

Then Stuart Ward, as “Guy,” an Irish busker turned vacuum cleaner repairman, sings an anguished lament for lost love and starts to leave his guitar and music career behind. But “Girl,” Dani de Waal as a Czech pianist, stops him, snatches a sheet of his own music from his jacket, and soon they’re playing it, the award-winning “Falling Slowly,” together.

If both those songs don’t knock the socks off the Orpheum audience, an even more magical number, “Gold,” provides Act One with a powerful finish. Starting as a soulful ballad with the lyrics, “And I love her so,” it builds into muscular choreography that captures the unique qualities of the music by Glen Hansard and Marketa Irglova.

Because the book by Enda Walsh is delivered with Irish and Czech accents, I’d recommend advance reading of at least the Wikipedia plot summary on Google and also running through the lyrics to more easily follow the story.

Not that it’s particularly difficult, but it is definitely unique and worth the effort to fully appreciate its haunting power. And you certainly don’t need to read the occasional Czech dialogue flashed above the bar, though it would have been fun to have my Czech-speaking friend alongside.

Once swept Broadway honors for good reason, but it arrives without the familiarity of past visits by old favorites. And the usual vocabulary won’t quite capture its overall magic, so one settles for describing some of the parts that make up a distinctive whole.

While Ward’s Guy and de Waal’s Girl quickly win an auditorium-wide rooting section, so do fellow musicians, ranging from a calming Scott Waara as Guy’s “Da,” to a scene-stealing Evan Harrington as big, bearded Billy, the music store owner and protector of Girl. He strikes karate poses and throws out his back before holstering his not-so-lethal hands.

Comic moments also come from Benjamin Magnuson as the bank owner. He sings an off-key ditty, “Abandoned in Bandon,” but plays guitar well enough to join Guy’s band in return for providing a loan.

Billy, outraged by the instrusion of a “capitalist,” threatens to quit rather than perform with “a banker from Cork.”

Which reminds me: Don’t expect to spend an evening with Irishmen in a pub without hearing that four-letter “f” word. I refuse to label them f-bombs, because they’re so natural from these lips in this setting. For example, anyone who’s regretted hearing a vocalist announce he’ll sing one of his own songs can understand why Billy quietly groans, “Aw, fuck,” when Guy makes that announcement.

Guy gets a better response when he hits an Elvis pose and mocks his own plight with a country twang on “Broken-Hearted Hoover Fixer Sucker Guy.” (It helps to know that Girl asked him to fix her Hoover that wouldn’t suck.)

But I’ve spent too much time away from the heart of this lovely, romantic story whose charm is preserved by not taking the most predictable path. Most of its magic comes straight from the music and the musicians, but it doesn’t hurt that one quickly falls for Dani de Waal and almost everyone else on stage.

Omaha Performing Arts has proved its worth again by bringing the best of recent Broadway, and promises to do it once more in October with Kinky Boots.