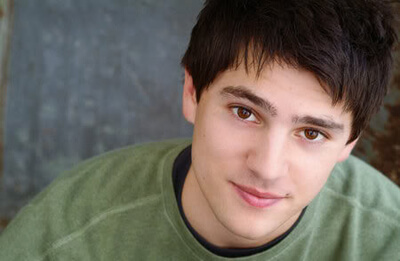 Klein burned hot and bright before flaming out. D’Agosto’s gradual rise may reach new heights with his performance in Dirty Girl. He joined writer-director Abe Sylvia and producer Jana Edelbaum for a Film Streams Q&A screening Oct. 17, marking the first time he’s accompanied one of his films back home.

D’Agosto plays Joel, an exotic entertainer who hitches a ride from wild child Danielle (Juno Temple) and her gay friend Clarke (Jeremy Dozier). Drawn together by shared outsiderness, the drifters form an instant family. D’Agosto’s screen time is brief, but he makes the most of it.

“It’s a small role but a memorable role,” he says. “It has a really beautiful scene that’s kind of the catalyst for the Juno Temple character finally finding some true relationship. Our characters share a sort of common understanding of two people who’ve been rejected by their fathers. They feel lost and sort of transient. I’m able to tenderly let her know she’s not alone in this kind of pain.

“There’s a lot of depth and dynamism to this character in terms of what he gets to do in a small period of time. For any actor that’s great and for me it’s a lot of stuff I haven’t got to play before, and I jumped at the chance. It’s just fun to take risks.”

Sylvia says, “What’s so funny is Nick does have a very sweet face and a very genial nature but in my movie he essentially plays a hustler. It’s a deceptive character in that you want to like him and yet you know he’s a bit dangerous, and I think it works in our favor Nick’s so likable.”

Edelbaum, who admired Nick’s work in Rocket Science, says, “The challenge was finding an actor who would be wish fulfilling to both a gay and a straight audience and Nick fits the bill. He’s sweet and he’s smart and he was so lovely to work with. He just gave and gave and gave, and you can just see it.”

In the 12 years since Election D’Agosto’s become a journeyman television-film actor, with four feature releases alone in 2011, but he’s ever-mindful of where it all started.

“The truth is while I was shooting that (Election) I really didn’t understand how important that moment would be for me. I didn’t realize this was my break, this was the thing that was going to bring me out to Los Angeles ultimately and have a foot in the door. I just didn’t know so many things. I was so naive at the time.”

He was a 17-year-old at Creighton Prep, whose artist alums include Payne, Holt McCallany, Conor Oberst, Richard Dooling and Ron Hansen.

He says Election was “such a singular film” it provided “a leg up” as an industry newcomer. Long after parlaying that success into a career he says “it’s exciting to bring my work back to Omaha.” Besides starting a new indie pic and auditioning for TV’s pilot season, he’s honing his craft in classes and trying stand-up for the first time. “I’m trying to push my own personal boundaries as a performer right now.”