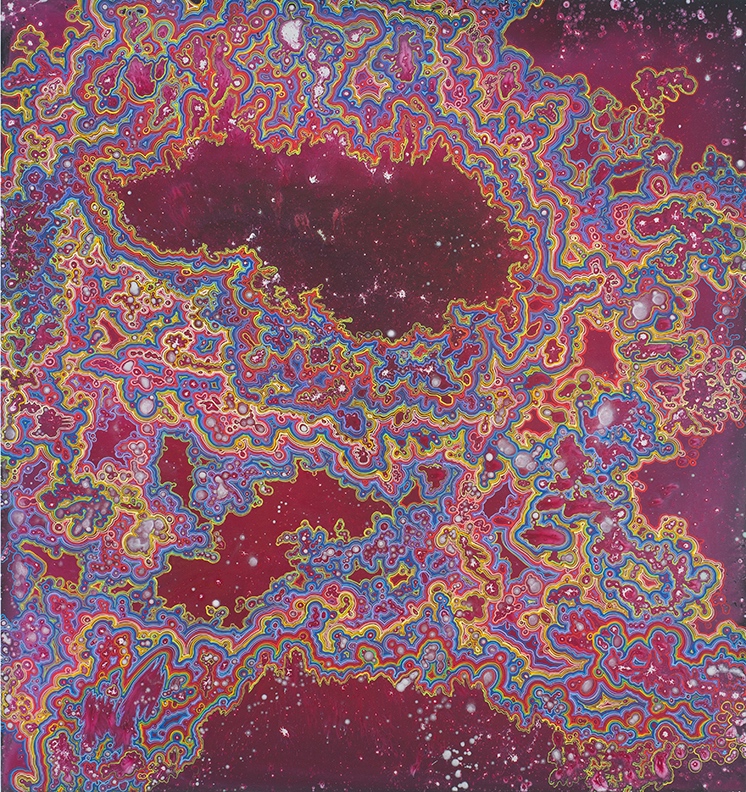 When looking at an artist’s work for the first time, it’s only natural to try to place it in the context of something familiar in order to connect with it. “It’s Rembrandtesque.” “How positively Picasso.” “It riffs on Warhol.” You get the idea.

The study of art history is in many ways built on such links. It has generally described a narrative of art by understanding how the artist mixed together varied temporal, discursive, cultural and personal ingredients into the recipe of individual expression. Naturally, we prefer our narrative to be clean and linear, moving neatly from point A to point B. Though history is seldom that orderly.

Looking at the formalist works of established artists Kenji Fujita and Barbara Takenaga, on view in their exhibit beginning.break.rapidthrough June 2 at the Bemis Center for Contemporary Arts, there are several artistic legacies to trace.

Sculptor Fujita displays a distinctly Modernist inheritance from Cubism and Constructivism through to Assemblage, Neo-Geo and Conceptual art. Painter Takenaga’s lineage speaks through a mélange of decorative abstraction, Op Art and psychedelia.

This list may feel notably Western, conforming to the story of European influences on American art. And why not? Fujita is a native New Yorker, who studied at Bennington College and Queens College, and teaches in Manhattan at Bard and the School of Visual Arts. Takenaga is a Cornhusker, born in North Platte, who studied in Colorado but quickly migrated east; she divides her time between teaching at Williams College and her NYC studio.

Yet it doesn’t take a detective to unearth the fact that each might have Japanese heritage. In fact, Fujita is second generation American; Takenaga, third. The question posed by exhibition curator Sheila Pepe is where does this genomic thread of inheritance fit in the narrative, in the aesthetic, in the mark-making of artists who themselves may not be conscious of its influence? And, how might the viewer discern this?

To provoke this consideration, Pepe introduces the concept of Jo-ha-kyū, a centuries old Japanese aesthetic that may be loosely translated as beginning-break-rapid. Originally applied to forms of motion, it has applications in music, martial arts and poetry.

Rather than a beginning-middle-end structure, Pepe suggests that perhaps these artists’ works are embedded with the subconscious rhythms of Jo-ha-kyū: gradual start, rapid acceleration to a peak, pause, followed by another acceleration cycle, and so on until they consider their pieces completed. 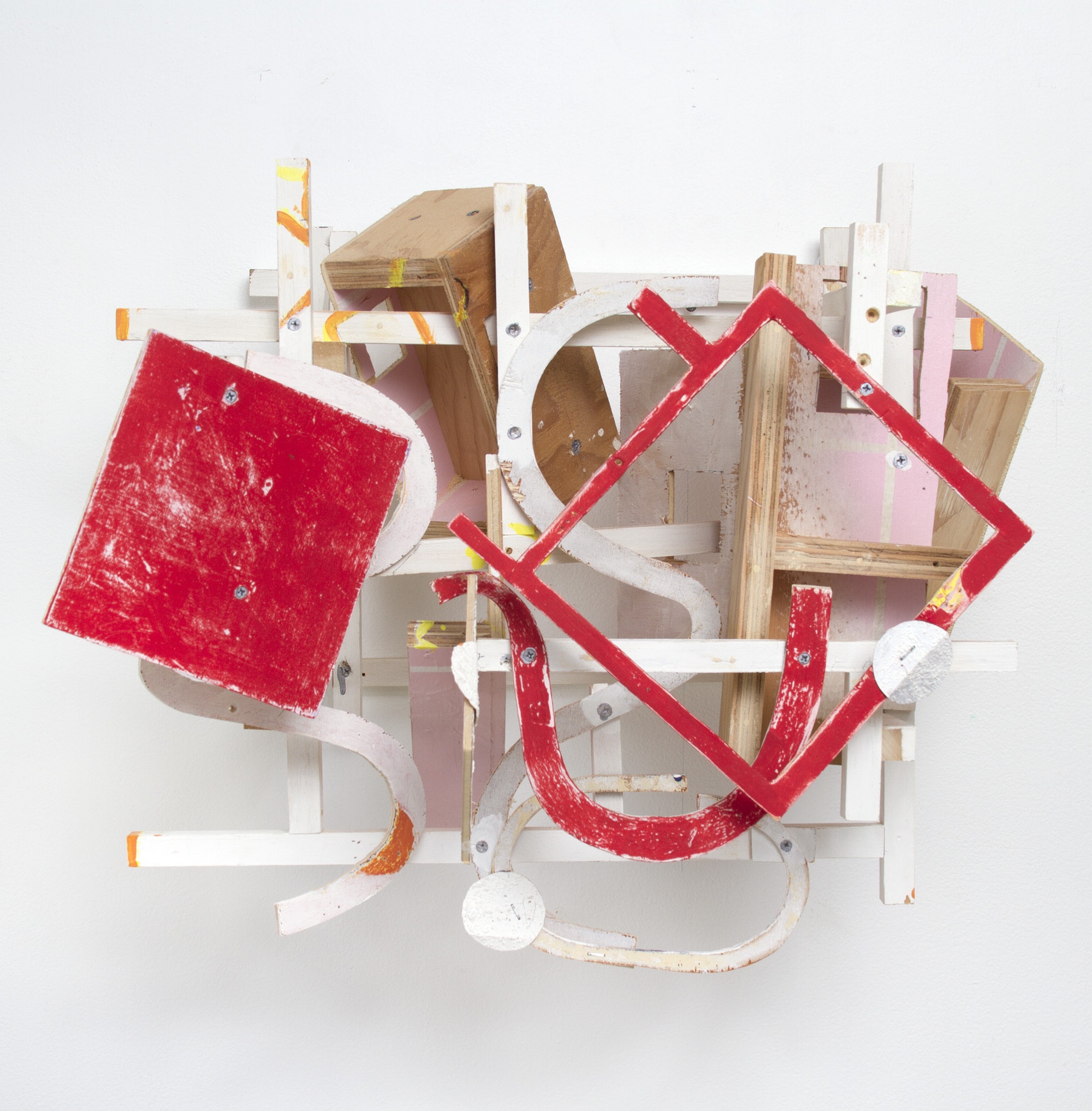 Fujita’s built-out sculptural reliefs seem most likely to embody this creative approach, constructed through rhythms of creation and response in the studio. On view at Bemis are two series of works—wall-mounted wooden assemblages of cut and painted geometric shapes and colorful pillow-like forms that rest on the floor.

Here is an artist who embraces both high and low. His materials are not precious: rough wood, plywood, cardboard, latex paint, calcium carbonate, bubble wrap, etc.: what the artist has essentially called more Michael’s than Dick Blick. The sculptures he crafts from these ordinary materials are nonetheless airy, delicate and balanced.

Consider Fujita’s “Accumulation #6”. It is a wall-hung sculpture that is almost cubic (24 x 27 x 23 inches) composed of an irregular lattice fashioned from casually cut and assembled wooden geometric shapes. Some elements are painted, either red, pink or chalky white; others are left bare.

Some wood edges are rough while others are smooth. Holes punctuate the shapes; some filled with screws while others are left open. Shadow play beneath the work creates a marvelously sinuous drawing on the wall and its sculptural framework plays differently from every angle.

It is a solid representative of the entire “Accumulation” series in the gallery. Clearly, Fujita revels in formal play of color, shape, plane and space, an inheritance recalling a century of geometric abstraction from Wassily Kandinsky to Al Held.

It has a kinship with the mechanically-applied abstraction of Constructivism, the baroque movement of a Frank Stella relief, the extravagance of 1980s shaped paintings. 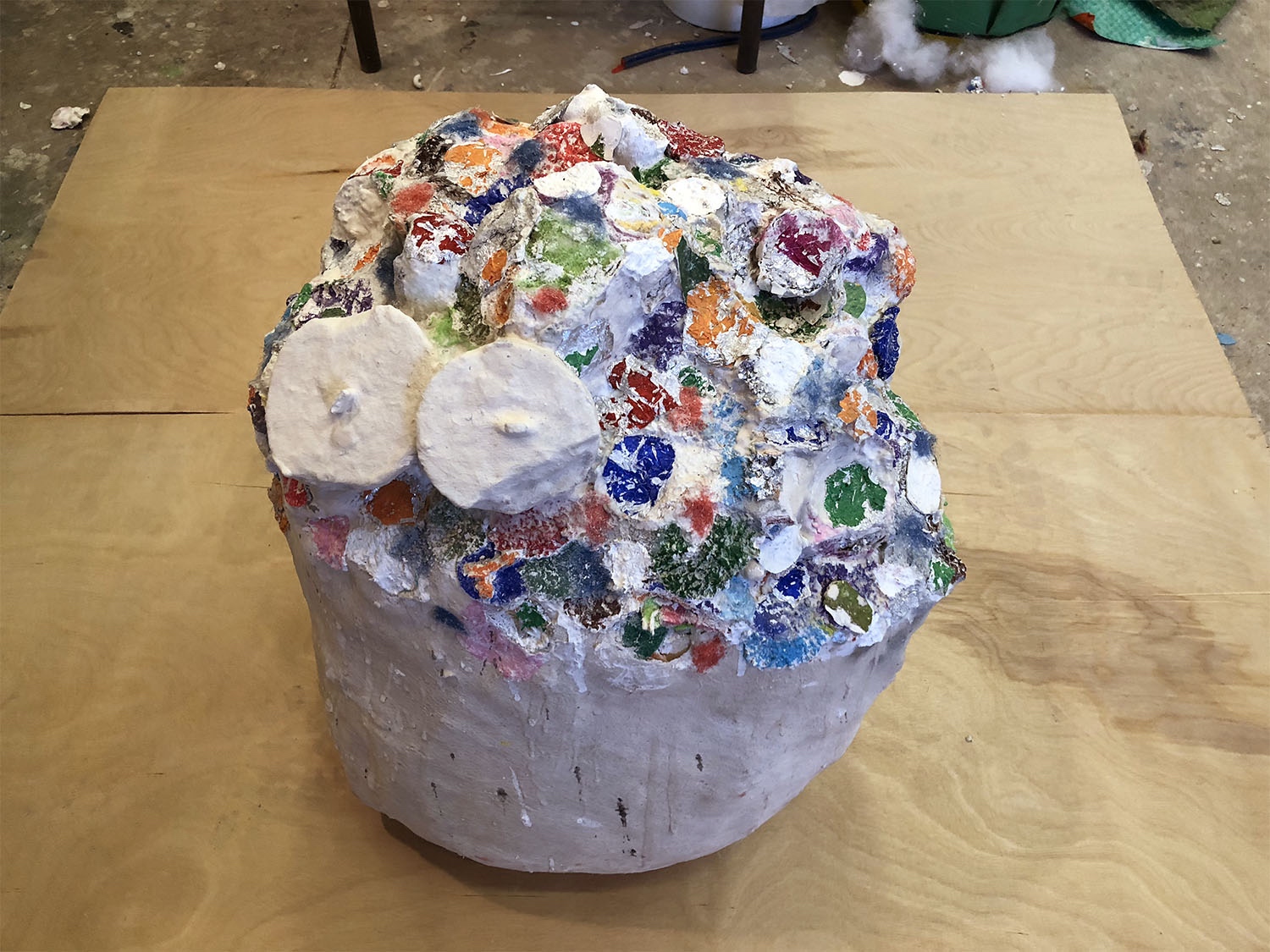 Also on view are a trio of “Terrain” sculptures, in which Fujita has repurposed the cutaway bits and pieces from his constructions. Like overfilled garbage bags, they are lumpy and irregular, and with their colorful array of circles at the top, appear to be filled with the aftermath of a great party.

In Fujita’s placement of elements, one choice builds on another. Is this his subconscious Jo-ha-kyū at work, or perhaps simply the rhythm of artisticprocess? Is the choice of humble materials, the combined order/disorder, and irregularity of forms more Zen or Richard Tuttle?

Where Fujita works hard to make his art feel casually determined, Takenaga creates acrylic paintings that are decidedly precise, elegant and stylized. They are optically vibrant, and the play of pattern—most often dots—takes you into worlds at both cellular and cosmic levels. 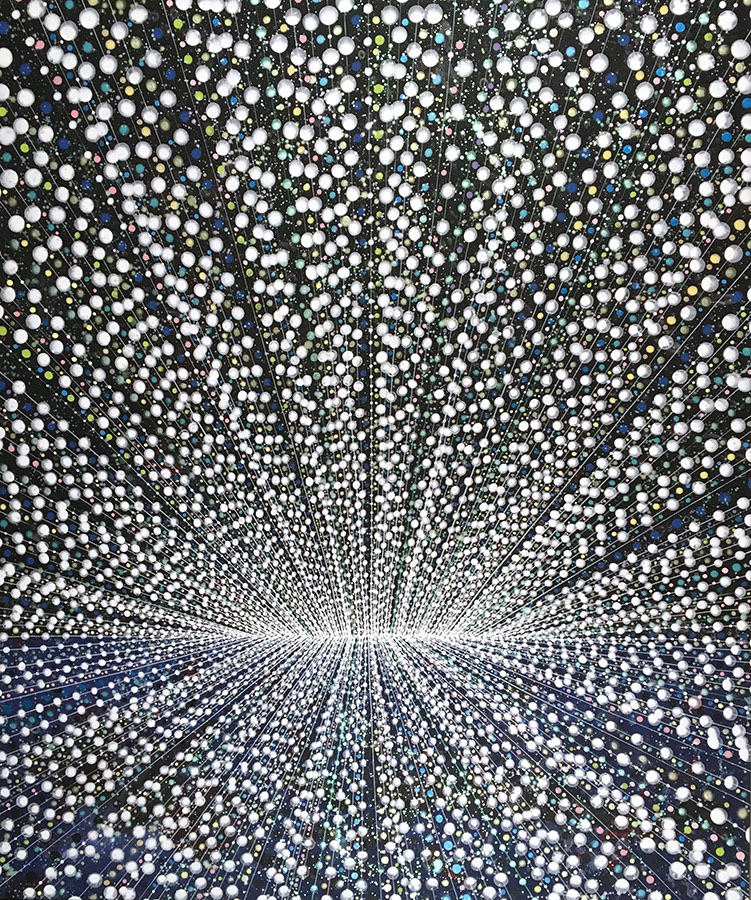 Take, for instance, her home state homage, “Nebraska II”. Composed of mostly white dotted orthogonals against a deep blue background, the lines merge along a low, glowing horizon line. After this long Nebraska winter, it conjures night driving in a plains snowstorm. With its blinding shower of light, it also seems witness to a celestial event; it contains the dramatic tension of an event horizon or pulsing energy force field.

Similarly, “Overhead” evokes a hypnotic, psychedelic red sky at night, with white dots shimmering in a scarlet canopy; cloudlike fractal forms are made by concentric rings of bright colors. Takenaga’s composition is all about the surface, yet forms float in an indeterminate space.

“C-Chan” contains an eddy of beaded chains of yellow and orange radiating from a spiral core. Contrasted against a black background, they offer no clue as to their macro or micro inspirations, but could just as easily be evoking something infinitesimally small or galactically huge. 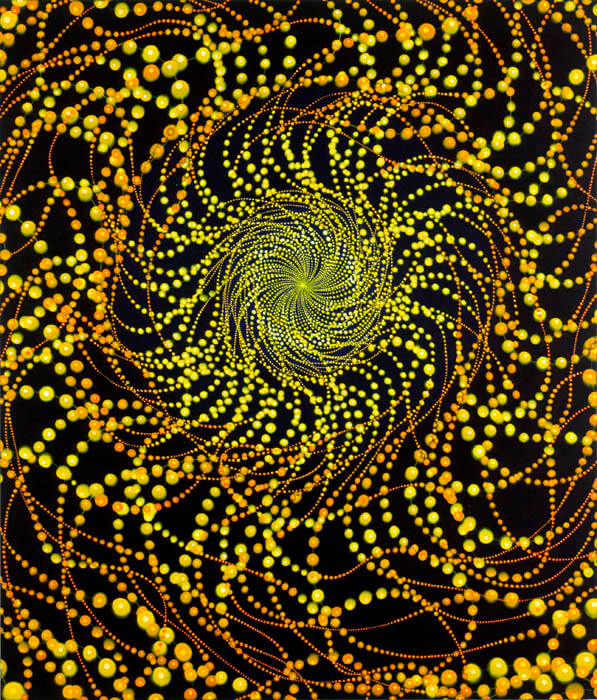 Takenaga often surrounds her dots with a ring of translucent color, giving them an aura and the subtle suggestion that they represent orbs rather than simple flat circular patterns. Combined with the whorling motion of the strands in “C-Chan”, she creates a transfixing effect of a floating mat.

Do her works reflect or embody Jo-ha-kyū? Takenaga describes her process as one beginning with freely rendered marks, then moving toward a deliberate and controlled exposition. Her acknowledged inspirations are quite diverse: she has studied Japanese woodblock prints, Tantric mandalas, diagrammatic Eastern art, patterning and design in Western art.

She is fascinated by images from the Hubble Space Telescope and electron microscopy. One might also see Peter Max, Yayoi Kusama and Aboriginal Dreamings somewhere in the helix of her aesthetic DNA.

beginning.break.rapid. then, is a considerable stretch conceptually; even Pepe admits this. It’s a point well taken, as we continue to understand that the slippery fabric of “heritage” is much richer and denser than we might have imagined.

But perhaps it’s asking too much to ascribe intuitive process in the studio to a particular cultural aesthetic. Or decode the entire artistic genome. In the end, whether there are answers to this curatorial proposition does not compromise the beauty of the exhibition, whose works by Fujita and Takenaga delight with formal play.

beginning.break.rapid: Kenji Fujita & Barbara Takenagaruns through June 2 at the Bemis Center for Contemporary Arts at 724 S. 12thStreet in the Old Market. Public hours are Wednesday-Saturday from 11am-5pm; on Thursdays, the galleries are open until 9pm. Admission is free. For more information, call 402/341-7130 or visit www.bemiscenter.org