Home » Art » It Takes a Village 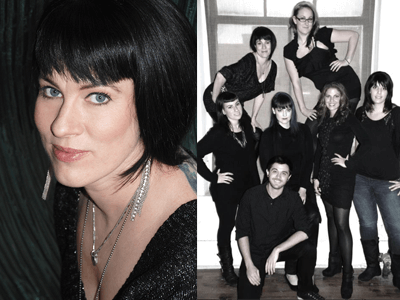 Chevy, or Siobhan Naughton Kozisek, owns Sirens salon and is ready to take on Fashion Week for the sixth year. She graduated from Capitol in 1997, where she took a liking to doing makeup over anything else. She’s been at it for over 14 years, often with makeup and waxing being her calling. She started working with media and film, too, so maybe she found just the right combination.

“I’m glad I never knew it would take so much to get here. I might have given up,” says Chevy, but she certainly persevered.

Chevy prefers Fashion Week when it falls in the warmer months because the weather allows for more options. “We’re always doing media and filming our work, so it’s better when we can be outside.”

Although Chevy never really gets to see the runway show, she always feels the energy of the back room while the models are getting airbrushed and adorned.

Chevy feels like the Old Market is a great setting for Siren’s salon, which specializes in everything but emphasizes artistic influence. She feels that the salon can reach its full potential in that location, free to go in whatever direction the stylists please. “I feel like people recognize us as Siren’s now. We try to have our own signature to everything.”

Siren’s and Chevy have taken a liking to Glo Minerals, a makeup product with natural ingredients that is tender on the skin. Glo is said to have some vibrant pigments not accessible through other brands.

The salon frequently uses this medium, but Chevy says the styles of makeup always vary from person to person. “I don’t let my clients see my work until I’m completely done,” Chevy said. She doesn’t specialize in just smoky eyes or heavy eyeliner; she’s covering the whole board.

Chevy says many stylists have been with her since Siren’s opened. This year Chevy is excited to work with designer Kate Walz, who is visiting from New York. “We’re also very excited to see the bridal line this year.”

Inspiration can be influenced based on the upcoming event, but often times it just comes from inside, Chevy says. Sometimes the salon gets a request; other times they are given more artistic freedom.

Fashion Week will be another one of those times where Siren’s and Chevy are bound to succeed — not only from talent but from earned experience.