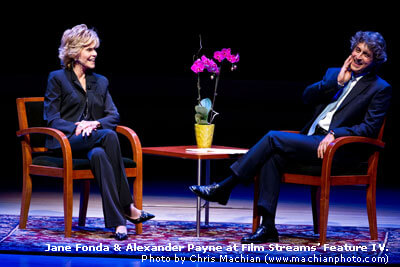 “An Evening with Jane Fonda in Conversation with Alexander Payne,” marked the fifth anniversary of Film Streams and the first time in 30 years that Fonda, had appeared in Omaha. Her last public visit was for the premiere of “On Golden Pond,” in 1982. The evening began with Jacobson thanking all of the supporters of Film Streams, including Omaha native Alexander Payne who sits on Film Streams board of directors.

Payne, who was introduced by Jacobson, gave thanks to her and her tireless work at Film Streams and then introduced surprise guest, and the event’s first guest five years ago, Laura Dern.

Dern, whose known Fonda sense she was a child, said she was proud to be a part of an event that proves, “Omaha really does breed great art,” and one that celebrated Fonda, a woman she said has the three traits that make a brilliant actress, “nobility, honesty, at all costs, and dignity.”

Fonda, with tears in her eyes, stepped onto the stage to a standing ovation. At 74, Fonda looked every bit the beauty she was considered when she first started her career in the 60s. Payne started by asking Fonda about her ties to Omaha, a place she used to visit frequently as a child with her father Omaha native, Henry Fonda. Because she went to boarding school, Fonda says that summers in Omaha were her chance to be a teenager, comparing her time here to the classic film “American Graffiti.” Omaha, she said, was in her “Dad’s DNA,” and she had continued to have deeply routed ties to the city.

Payne, who created the questions for that evening, focused on the years 1969 to 1980, a time of great career strides for Fonda. “Your leaving out ‘Barbarella’!” Fonda said feigning shock when she heard that Payne would be skipping over the 1968 cult classic that made her a sex symbol.

The first film that Payne and Fonda discussed was 1969’s, Sydney Pollock directed, They Shoot Horses, Don’t They? Fonda described that particular film as a turning point for her as both an actress and a woman.

“No one had ever asked my opinion before. It was so empowering,” she said when speaking about Pollock, who asked her for opinions on the script before filming began. “It was my narrative.”

A common theme through the night was Fonda’s change and growth as both an actress and women during this time period. For her that growth could be found in Alan J. Pakula’s 1971 film Klute.

While making the film Fonda say’s that she began to “understand what feminism was.” She would spend a week with call girls, while filming and that was the only time she had doubt while filming the movie.

“Not once did a John wink at me. I went to Alan and said I cant do it. Get Faye Dunaway,” Fonda said. It was during the filming of a pivotal scene that Fonda realized she had grown as a person.

She also discussed the shift she had as an actress during the filming of Klute, when she realized that there just weren’t many films that portrayed what she cared about. It was during filming that she started developing the landmark film Coming Home, after hearing veteran and war protester Ron Kovaks speak.

“He said I may have lost my body but I found my mind. And I thought I’m going to make a film about that concept.” The film would go on to win three Academy Awards, including Fonda’s second best actress award.

“It strikes me when I see these films,” Fonda said after watching an emotional clip from the film, “that they allow time to pass in silence. It doesn’t have to all be loud.” Fonda said that “Coming Home,” was also one of the only times her father complimented her film career. He was stunned to learn that most of the film was improvised.

Because she was a producer on the film, Payne asked her what she would produce a film about today. “I’m too old to produce now. But I am 74 and I’d like to show that it’s not over, that you do have a life ahead of you.” The deeply emotional evening became more so when she talked about On Golden Pond, the 1981 film she did with her father. It was discussing the film when she started to tear up again.

“I just kept thinking, how blessed I am I to produce a film where I get to act out this relationship with him?” Fonda said. “I didn’t anticipate how hard it would be, though.”

Throughout the insightful evening Fonda proved that Laura Dern’s earlier words were true. This is a woman who embodies nobility, honesty, and dignity. This wasn’t just a question and answer session. This was a genuine discussion between a living legend and a legend in the making.

“What do you want your legacy to be?” Payne asked Fonda at the end of the evening. “I don’t know. I don’t think in those terms. I don’t really care. I guess that I made a difference. It’s been a good life.”

The Feature IV fundraiser raised $226,230 for Film Streams which will go to support year-round programming at Film Streams. For further information about the evening, visit filmstreams.org.