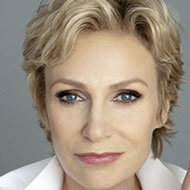 Jane Lynch is most likely a name you recognize, whether from the TV sensational character Sue Sylvester in “Glee,” her performances in the abundance of other shows and movies or from being the host of NBC’s “Hollywood Game Night.” Maybe you have read her autobiography, “Happy Accidents” or perhaps you saw her Broadway debut as Miss Hannigan in Annie. Whichever iconic role you know Lynch from, her comedic, sarcastic and outgoing roles stick in your mind. For one night only she will be in Omaha performing her musical comedy tour, Jane Lynch: See Jane Sing. Yes, not only is this woman drop-dead hilarious, but she can sing! This Emmy® and Golden Globe® award-winning actress, famous for so many different aspects of Hollywood, began her acting career in Chicago and since then has grown to hold not only iconic roles, but play recurring characters in many TV shows and a wide array of roles in films. Joining Lynch on stage will be Kate Flannery, who played Meredith on “The Office” and the man who arranged the music on “Glee,” Tim Davis. Backing these three talented people will be the Tony Guerrero Quintet. Audience members lucky enough to snag tickets to this event can expect a musical comedy with the signature wit you know from Lynch, on top of a demonstration of her love for the American standard show tune. Attend this event to find out if this show includes any songs from Christopher Guest’s mockumentary folk band New Main Street Singers from A Mighty Wind.