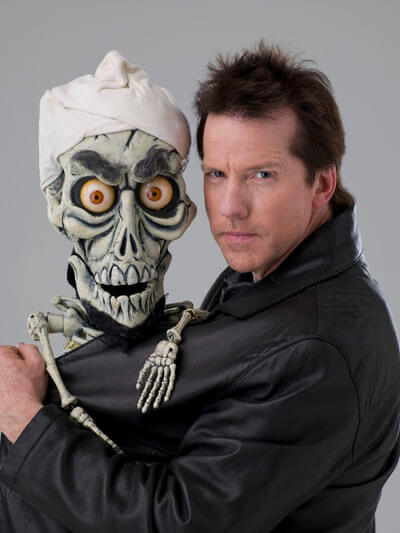 Three Up, Three Down March 4 Jeff Dunham Qwest Center Omaha, 455 N. 10th St. 8 p.m., $45.50, ticketmaster.com Each week in this space, we will feature three questions posed to one of our featured “picks” for 8 Days. In this debut installment, we tweeted with standup comedian/ventriloquist extraordinaire Jeff Dunham, who returns to the Qwest Center Friday, March 4. Dunham has been called “America’s favorite comedian” by Slate.com, and according to the concert industry publication Pollstar, he is the top-grossing standup act in North America. That’s quite an achievement for the Dallas, Texas, native who has been credited with reviving ventriloquism. Dunham’s character/puppets have been described as “politically incorrect, gratuitously insulting and ill-tempered.” We asked about his inspiration for his characters and more in this week’s Three Up, Three Down . How did you come up with your popular characters Jose, Walter, Peanut and, most infamously, Achmed? Every character I’ve had in my act — none of them have a similar creation story. I actually thought up Peanut and designed him in my head. I described him to a woman that was making soft puppets and she drew up some sketches. And the character came to be just because he popped into my head. Walter on the other hand … I figured he would be a good three minutes of the show. I created him thinking that nobody would enjoy a grumpy old character like that. Little did I know, he is an “every man” … everybody has that guy in him. Either they’re married to him or he’s their father, but people for some reason love him. So that character just stuck. Jose the Jalapeno — that’s the weirdest story. When I was in college I was doing a radio campaign on the radio station and I was doing all the voices of this pizza. Every ingredient on the pizza spoke. And one of them was Jose Jalapeno. He ended up having all the funny lines. So I thought about making a dummy in the act. So I thought why not a Jalapeno on a stick? The genesis of Achmed began a year after Sept. 11th. Sad and scary things were going on in our country — and still are — and I thought if I can make fun of those guys, there’s something people can laugh at in our country. And then the big surprise was that I had no idea it would go worldwide. Which one is your favorite? Whatever that particular audience of the night is liking the most, I’m having a ball right along with them. It goes without saying, however, that Achmed certainly has allowed me to break through in places that otherwise might have remained closed for a while … So is he my favorite? I couldn’t say that and hurt Peanut’s feelings. What is it like playing to huge arena audiences? Moving into much larger venues, coupled with the current economic climate, has also upped the ante for getting the show right every time. When we first started doing these huge arenas, I was concerned that the intimacy of the 300-seat clubs that I had grown to know so well would be missing. On the contrary, the audiences stayed right with what I was doing. The bigger the venue, the bigger the screens. Everyone has a good seat. The only thing missing is being able to pick on some poor schmo in the front row and everyone being able to see him.