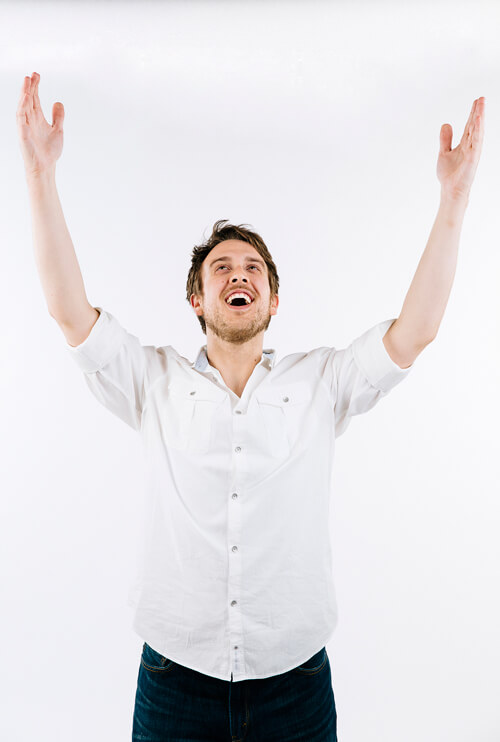 By the time Jesus Christ Superstar settles down for The Last Supper, you don’t expect a Leonardo DaVinci look on the Omaha Community Playhouse stage. Instead, when the title character raises red plastic in a picnic setting, you wouldn’t be shocked if he sang, “Red Solo Cup, I lift you up, lets have a party.”

But director Kimberly Faith Hickman doesn’t stray that far from the original. Jesus does refer to the bread and wine as body and blood.

He is betrayed by Judas, given 40 lashes and crucified, though on a wire cross rather than wooden timbers. No, we don’t get the dramatic ascension that often ends professional treatments of the Andrew Lloyd Webber and Tim Rice musical.

So the question you might ask is how well does it work? The decision, as the director puts it in her program notes, “to place this story in the modern era.”

That depends pretty much on each viewer. I found the pogo-hopping choreography for the teeny-bopper disciples off-putting in the second scene, and became uncomfortable with Mary Magdalene’s constant face-dabbing of a Jesus who didn’t seem to need drying off. The writers for David Letterman and Jimmy Fallon would have been thankful for the material.

But I was okay with Jesus in an orange jumpsuit, a choice which appalled my wife who, when the soldiers brought him to his knees, saw it as an ISIS hostage at the feet of Jihadi John.

So it still comes down to whether these choices undercut the story’s dramatic power. For me, the style became less distracting as the drama gained strength, thanks to the vocal performances by John Gajewski as Jesus, Roderick Cotton as Judas and others.

Give me a few hold-your-breath moments that match the intense overture by music director Jim Boggess, and I can swallow the hashtag JC bit and smartphone trendiness. The highlights often involved Cotton’s Judas, especially when he fears that the man he betrayed may indeed be the God he said he was. Then he softly sings, “I don’t know how to love him,” and the audience is spellbound.

Mike Markey’s Pontius Pilate was impressive, too, as he wrestled with the charges against Jesus, torn between his innocence and the crowd’s cries to crucify him. I’m not sure, though, why he couldn’t wear a judge’s robe rather than a business suit.

Jerry Van Horn provided a lighter highlight with his music hall romp through King Herod’s song, a mocking challenge to perform miracles which Jesus suffers in silence.  Cork Ramer’s Caiaphas gave basso force to “This Jesus Must Die” and Roni Shelley Perez as Mary Madalene rendered a sweet version of “I Don’t Know How to Love Him.”

Joey Galda as Simon and Jimmy Nguyen as Peter also sang well, with the maturity of the latter’s voice contrasting with his appearance as a little kid with oversized black glasses.

It helps to remember that all this began as a rock opera, which seemed to require falsetto screams in 1970 which apparently don’t need modernizing in 2015.

Back to the main point: the dramatic power abides. I liked scenic designer Jim Othuse’s lighting of the sky better than his steel and glass towers, but I suspect that’s simply because the skies reminded of those old black-and-white Biblical movies once shown in church basements and the towers didn’t remind me of anything relevant.

So most of my petty complaints are the curmudgeonly gripes of someone born before television, not to mention long, long before texting and selfies. The only big disappointment was the decision to downplay the title song, depriving us of a rousing, room-shaking treatment that would send us all home singing, “Superstar, Superstar.”  No big chords, no stage-filling ensemble.

But honesty demands reporting that as I headed through the parking lot, wouldn’t you know it, someone was singing just that.