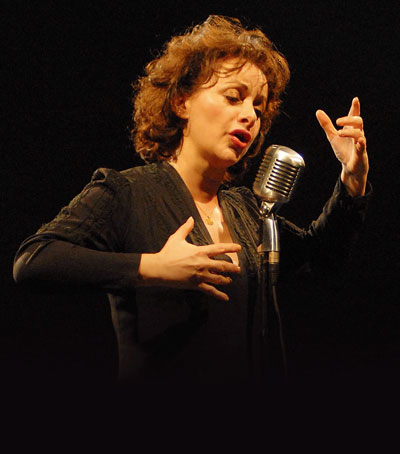 PICK OF THE WEEK March 19 Jil Aigrot in Concert Holland Performing Arts Center, 13th and Douglas 8 p.m., Tickets start at $19 402-345-0606, ticketomaha.com Jil Aigrot’s Holland concert is as good an excuse as any to celebrate Omaha’s own chanteuses. Aigrot, the voice of legendary Edith Piaf in the acclaimed 2007 French film La Vie en Rose , specializes in the heartbreak ballads that made Piaf a wildly popular singer the first half of the 20th century and that keeps her an enduring cultural icon today. Piaf embodied the soulful, lovesick songstress whose American equivalent is variously the torch singer and the jazz vocalist along with interpreters of blues, R & B, soul, show tunes and the American popular songbook. These revered female vocal stylists over time have included Billie Holiday, Lena Horne, Rosemary Clooney, Ella Fitzgerald, Carmen McRae, Sara Vaughan, Dinah Washington, Nina Simone, Peggy Lee, Judy Garland, Liza Minnelli, Nancy Wilson, Natalie Cole and Sylvia McNair. Omaha’s contributed at least two of its own to the ranks of these nightclub and concert hall divas. Julie Wilson has been a New York cabaret fixture for more than half a century. Karrin Allison is a more contemporary chanteuse cut from the same cloth as her elders. This season local music lovers have had the opportunity to enjoy the artistry of not only Allison, but of Dee Dee Bridgewater and Patti Austin. It’s been a rare treat for fans of this sisterhood of the plaintive-tinged, smoke-filled voices. And now comes Aigrot conjuring the spirit of Piaf. Consider it inspiration or invitation to seek out the city’s roster of alluring femme fatale singers who practice their intoxicating craft here at home. Anne-Marie Kenny left Omaha for Paris as a teen and reinvented herself as a cabaret singer. Camille Metoyer Moten has built her chops and repertoire performing in musical theater and cabaret settings. Susie Thorne has honed her technique from a wide variety of influences. As required by their medium, all three women draw on a combination of formal training and life experience to inform their work. Chanteuse the night away at a live performance. Program your own concert at home via CD or iTunes. Or, if in the mood for a melodramatic film portrait, go the DVD or download route for your fix of torch singer blues. Film Streams is presenting a special 2 p.m. screening of La Vie en Rose on Sunday, March 20. Aigrot will be there for a post-screening discussion of the film and Piaf.