Home » Art » Johnny and the Giants on TCM 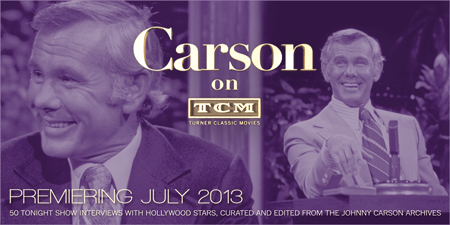 Johnny Carson wasn’t called the King of Late Night for nothing.

At the peak of his fame the Nebraska native (1925-2005) who never forgot his home was a bigger presence than the most famous of his show biz guests. The overexposure of film greats on shows like his and those that followed may account for the diminished popular star power among Hollywood’s elite today. By the end of his 30-year run in 1992 Carson was entertainment royalty and guests mere courters or pretenders to the throne. But he never lorded it over guests, only the NBC executives who did his bidding.

Back when it was still rare to catch a bona fide movie legend on the tube, Carson used his homespun manner, sophisticated wit and genuine hero worship to get big name stars to let their guard down. Warmed by Carson’s insouciant charm, icons made small talk, cracked jokes and told stories, thus becoming human before our eyes. Their genial interviewer never pried too far, yet invited enough intrigue to make us think we were eavesdropping on private asides.

As Carson interviewed so many Hollywood greats it’s only natural Turner Classic Movies is featuring many of his best movie star interviews in a new series, Carson on TCM, showing in July and August. It’s the brainchild of producer Peter Jones, whose 2012 documentary Johnny Carson: King of Late Night premiered on PBS, and Carson Entertainment Group president Jeff Sotzing. With complete access to the Carson video library Jones and Sotzing assembled 50 clips averaging 10 minutes each for the new program.

In culling together the TCM segments Jones says “the criteria was Johnny and his guest as good a they can possibly be,” adding, “It wasn’t enough just to have a famous person on the show with Johnny Carson – it had to be a really good appearance where Johnny and the guest were entertaining and informative. And that happened more times than one would think considering he did 30 years worth of programs and you can’t hit a home run with every appearance.”

“But for the most part people really were at their best with him because he had a way, and we heard it over and over again, that made them forgot there was a camera and an audience of 15 million people. So often major stars accustomed to being in scripted films can be petrified with live television, but over and over they said Johnny made you forget all that to focus on having a conversation with him.”

Jones says in addition to the quality of the interview and its entertainment value, he selected guest spots showcasing mega stars from the TCM archive.

“With Turner Classic Movies we wanted to make sure we gave them stars they could feature from their vast library of films, which literally covers everybody from our collection.”

In the case of frequent guest Angie Dickinson, with whom Carson enjoyed a sparking chemistry, Jones says he watched all 20 or so of her appearances before selecting “the one we used.” He adds, “Johnny and Angle famously flirted with one another on the show and they did date in fact and when you watch the appearance we selected you can see this sexual tension between them. It is wildly entertaining without it seeming tawdry or cheap. That’s hard to pull off.”

“Johnny only had three more months on the Tonight Show and for all those 30 years he had wanted to have Elizabeth Taylor on the show. For both of them this was a big deal. Both of them are charming and they kid each other about their marriages and they do it in a way where nothing’s off-limits but you can see there’s genuine love and respect there. It’s not smarmy.”

Jones believes there was something intrinsically real in Carson that disarmed guests and put them at ease.

“It had everything to do with his Midwestern roots. Johnny Carson listened. He was a perfect gentleman. He treated every guest with respect. He didn’t laugh at them, he laughed with them. Over and over again I heard that Nebraska never left Johnny Carson and it was a quality that made him stand out from the rest. The ability to really listen and be in the moment with his guest, not thinking about the next line he’s going to say, to genuinely respond, is what made his interviews a real conversation and exchange, not dueling monologues.”

Another native Nebraska talk show legend, Dick Cavett, was known too for his way with movie icons like Katharine Hepburn and Groucho Marx, and he hosted an earlier TCM series showcasing those segments from his old ABC show.

Jones laments that what passes as late night talk these days has abandoned the art of conversation practiced by masters like Cavett and Carson.

“I think it’s mostly completely lost because what happens today is the segments with the guests are much shorter and they’re completely preplanned and scripted.

Guests know what the questions are going to be, they have their anecdote that’s already been prepared and rehearsed and it’s prefabricated. Where with Johnny there were subjects and areas they knew would be open for discussion but it wasn’t as preplanned as it is now. I think the spontaneity is no longer there. It’s all really pretty much scripted.

Jones says Carson didn’t need a star opposite him to shine.

“His staff called the people who were not stars that appeared on the show ‘citizens,’ and Johnny was really at his best with regular people, the ones who had the strange avocations like the family of yodelers or the lady who collected potato chips shaped like animals. It was humorous but it wasn’t in any way ridicule and there’s a huge difference. He was fascinated by these quirky individuals and he let them come through as they really are without being in any way condescending or patronizing – a remarkable quality – and that’s pure Midwestern decency.”

Jones, who lobbied 20 years before getting permission to do his Carson documentary, says the comic known for his icy reserve was far more vulnerable and revealing on screen than generally appreciated.

“He would give clues on the Tonight Show that would be little references here and there to his upbringing in Nebraska and his relationship to his mother and his start entertainment (from a magic act to hosting programs on Omaha radio and TV).

“We were able to access clips not seen since they originally aired which went to the heart of what my premise was – which was you could find out who Johnny Carson was in plain sight with his appearances on the Tonight Show, and by God they were there. Johnny was so proud of his roots. He considered himself a Nebraskan through and through. There’s a wonderful (1982) special Johnny Goes Home when he went back to Norfolk (Neb.) and you can see him get very emotional. That gave you a little window into who he was.”

Carson on TCM is a looking glass view of the King without his clothes getting stars to expose themselves, too.