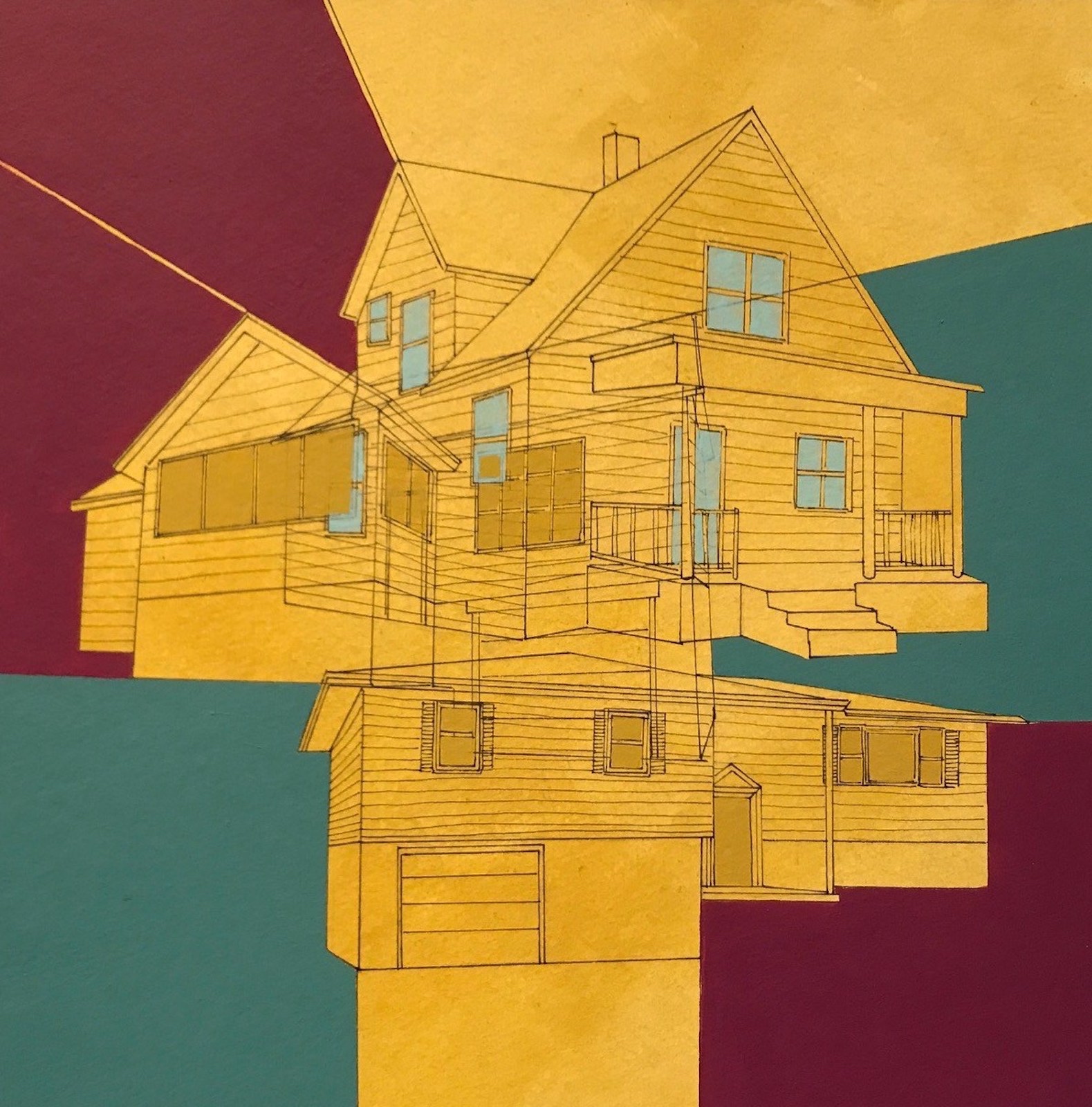 Can a house have a personality? Do memories exist in the walls of an old apartment?

In the first Amityville horror film, from the late seventies, the star, or antagonist (it is a horror film, after all) is a house; a quaint, two-story, with gambrel roof and those (initially) welcoming and glowing, quarter-moon windows.

The film is about a family whose new-home excitement fades quickly, as they tolerate only about a month of the terror and special effects scariness perpetrated upon them by the anthropomorphic house, fleeing after only twenty-eight days.

Though horror tends to dominate those domiciles that have a role in cinema…think “Psycho” and “Rosemary’s Baby” as well…not all portrayal of houses in the visual arts is negative or even gloomy. Some homes just leave a lasting impression.

Artist Katie B. Temple’s new show at The Little Gallery in Benson, Home Sweet Home,is comprised of works that portray houses as if they had personality, or, at least, memory. 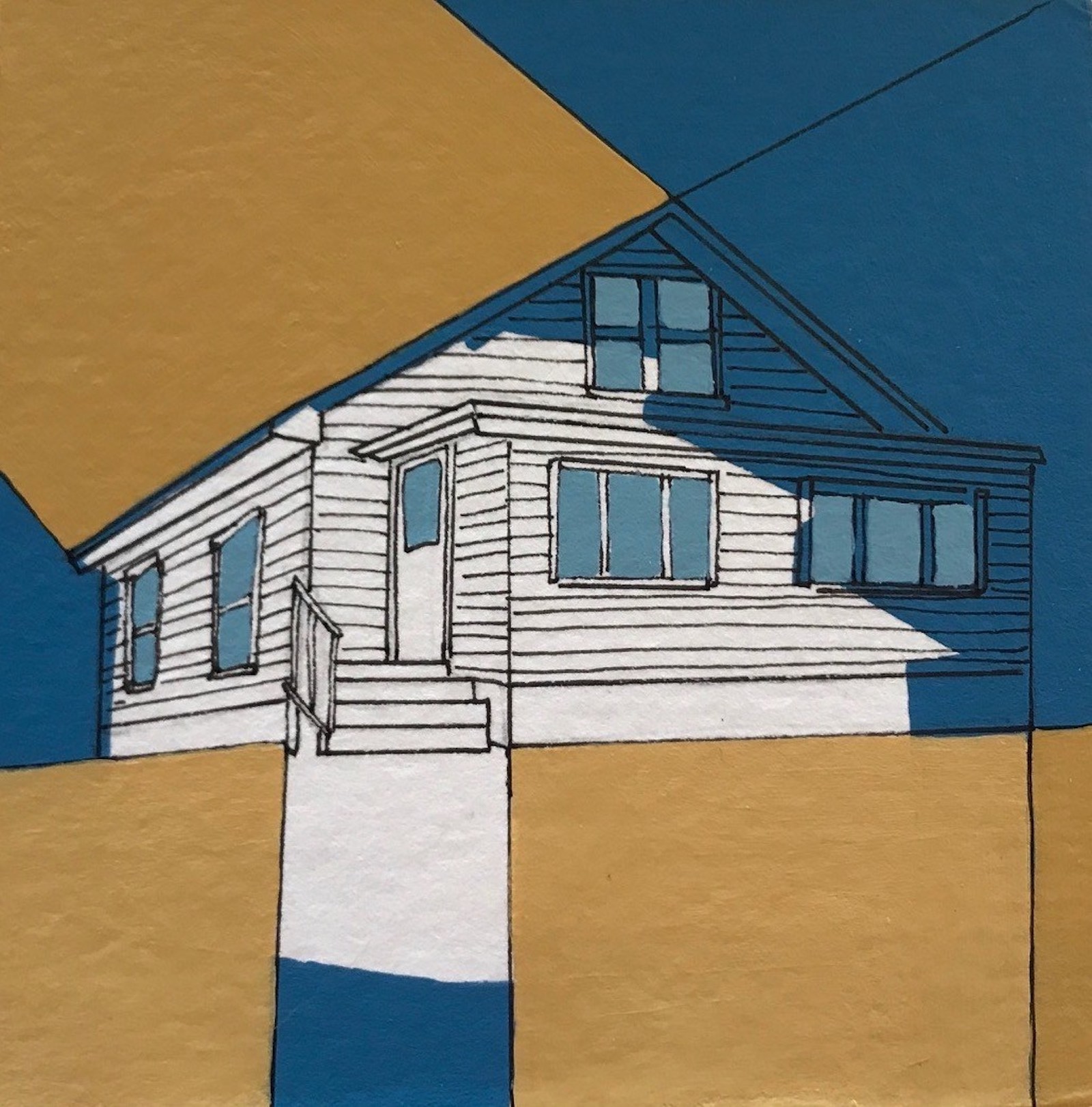 Whether it be lightning or “plasma energy” from within a haunted house, or the simple glow of a television, the light behind the windows of Temple’s “homes” establishes the eyes of a residence. And as the old saying goes, the eyes are the “window to the soul.” It’s easy to make assumptions about situations and lives behind those windows, and often those windows even give the structure itself a face.

The Little Gallery lies in the Benson commercial neighborhood, and artist Katie B. Temple was able to make it less little (it’s not that small, really) with almost sixty or her paintings. The exhibit, Home Sweet Home, consists of 58 of her gouache/ink/and acrylic paintings, arranged neatly and comfortably in this double-storefront space. The exhibit will wrap on “Closing Day” with a reception this Thursday, June 28, from  5-7p.m.

The gallery itself is a well-lit, rectangular room with a few pieces of furniture, the west side looking a bit like someone’s living room. The large, storefront windows, though limiting the wall hanging area, face north providing desirable light during the day and summer evening hours. Most of the works in this show are small but invite more intimate and detailed study.

With so many paintings of the same medium and style, interest comes from the variations and complexity of the line work, and the use of color. Curated by gallery owner Teresa Gleason, and arranged by Temple, the exhibit is divided comfortably by size into a few groups, with some of the smaller works (3” x 5” and such) displayed both on the wall and on shelves and tables. There are a few larger works in the range of 11’ x 14” and one larger piece at 30” x40”.

Like the ring from a glass left on a side table fifty years ago, or the teeth marks from your baby brother on the edge of a coffee table, our experiences and relationships within the inanimate and built world, so often discarded without much thought, leave a mark, scar, a memory.

Three years ago, Temple was inspired to paint the many structures in which she had lived. This led to further studies of other vacant houses and apartments, and a few commissions. It was her attempt to graphically capture a bit of the history of the structure’s use, to graphically portray the concept that the structure has “memory.” The work, she states “…are about them being vacant and empty… I began this body of work when a home across the street from my studio suddenly went from occupied to unoccupied.”

Each painting consists of a black line, freehand drawing of a house, or houses, some a bit looser than others, all with minor attention to detail, emphasizing the shape and only some specifics. Things like railings, brackets or window frames are included. Some of the paintings are more complex, with a house layered upon another house, or a house melding into another house.

Temple takes artistic license with the lines created by portions of the structures and perspective angles, carrying them out to the edges of the piece and around the sides. This creates a mosaic framework not unlike a stained-glass window, that pleads to be filled with color.

And Temple accommodates, applying colors in combination, filling the voids created by her line work with contrasts and compliments. The final touch being one color filling each window. This color choice specific to each work, may be where most of the “life” comes to the house, where the viewer makes most connections.

She applies the paint in most works as solids and washes, sometimes filling in portions of the house itself, overlapping colors sometimes. A texture/ brush stroke variation can be seen in the color fields on a couple of paintings.

It is Temple’s choice of color applied to the windows that draws one into a connection with the house and its memories and gives the specific structure some personality or soul. 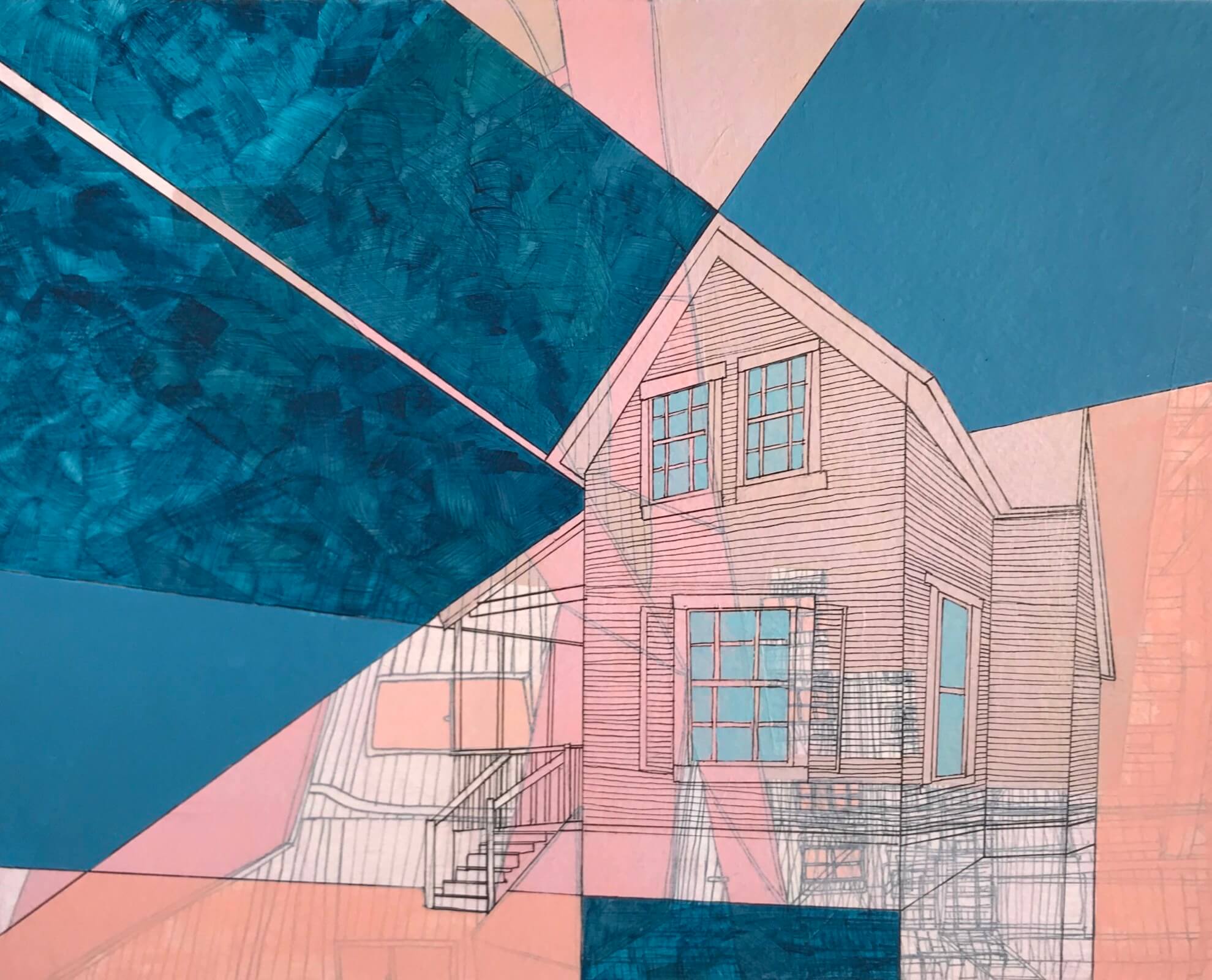 The visitor might find sheer number and repetition of works a little overwhelming. Each has its positives. There are definite standouts such as “Mason Street Rental” with its quiet but happy pinks, and the linework that emphasizes an eclectic and changing exterior in an older residential area and “First Home Lost”, a multilayered mosaic of color and ghostly images.

Several of the small works might have been more impressive at a larger size, especially those that involve more complex layering and line work. “W. 209thAvenue,” another with multiple layers and colors working together, and “California Street” a bold graphic selection of color and straightforward house stood out for its simplicity and color palette.

Though some of the houses appear lonesome, the final result in these works is not one of loss or vacancy, but of unspecified memory and humanity.

The Little Gallery is located on the East side of the Benson commercial district, at 5901 Maple Street. Katie B. Temple’s paintings will be on display through June 28 with a closing reception  this Thursday,  5-7p. m. Further information is at 402-681-1901, or The Little Gallery Benson on Facebook, or katiebtemple.com.