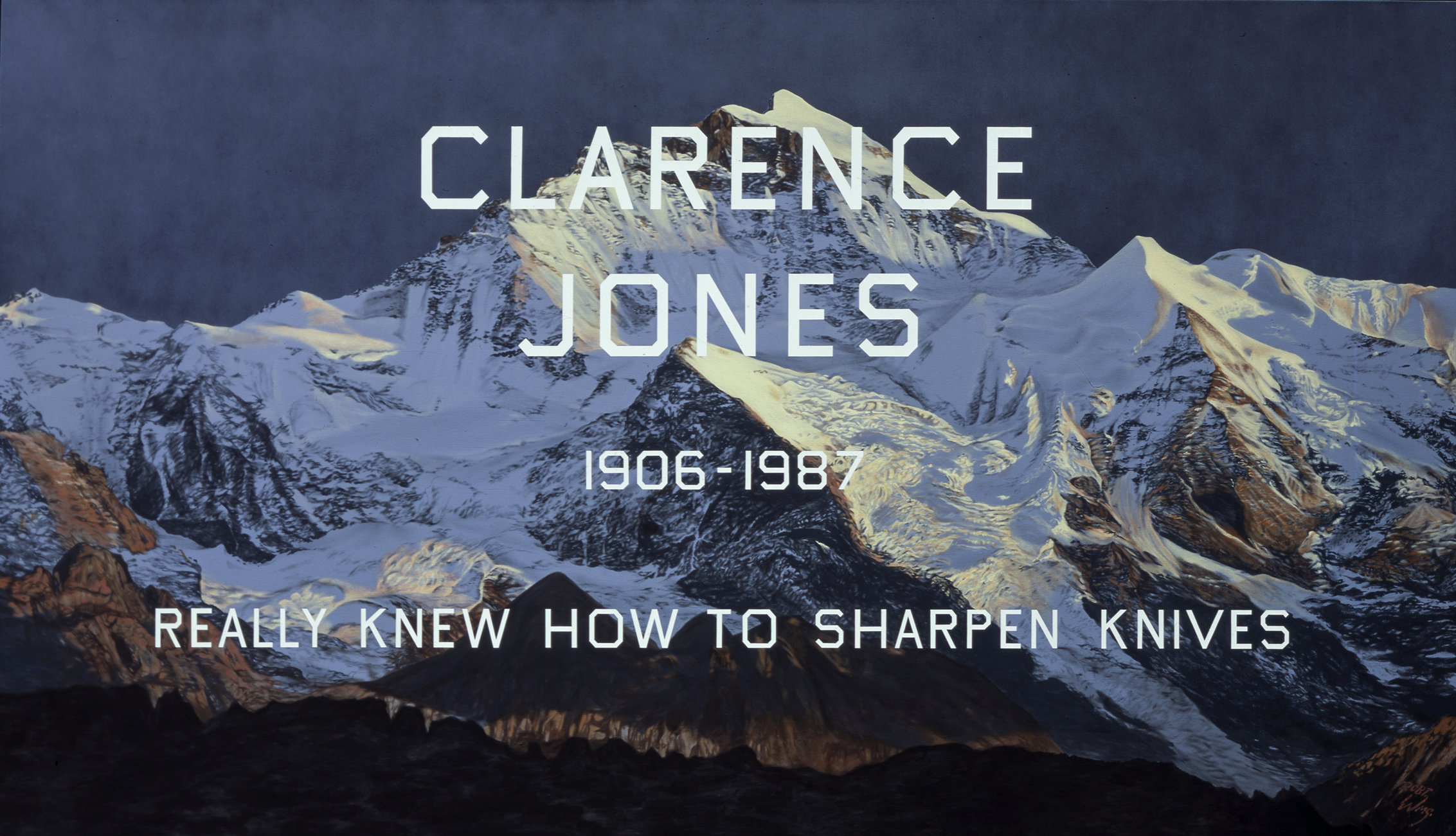 To trot out the most hackneyed of clichés, it is said that a picture is worth a thousand words. And what if that picture is words? If typography is a main feature? If message and image compete for attention? If they are complimentary? Contradictory? Do the words create meaning or make it more elusive?

These are questions posed by the current major exhibition at Joslyn Art Museum: Word/Play: Prints, Photographs, and Paintings by Ed Ruscha, on view through May 6.

Ruscha (pronounced Roo-shay), an early influencer in the West Coast Pop and conceptual art revolutions, remains at age 80 an iconic figure on the international scene. This show, the first extensive local look at this LA dwelling, Omaha-born artist, homes in on the work that distinguishes his long career with its emphasis on manipulating visual and verbal codes.

The first gallery opens with “Clarence Jones,” a blockbuster of a painting lent by the Phillip Schrager Collection that serves as a fitting broadside for the exhibition. It fronts as a magisterial mountain landscape painting, a rugged, Manifest Destiny tinged Bierstadt for the 21th century. This vista is overlaid with a message in a clean, white font: “CLARENCE JONES/1906-1987/REALLY KNEW HOW TO SHARPEN KNIVES.”

Suddenly, the painting moves from a rousing sublime to moving epitaph. Who was the late lamented Clarence Jones? Was he a latter-day frontiersman, a Jeremiah Johnson? Or was he just some random guy, whose distinction was to have a mad talent for whetting? If a proper memorial, why is the message posted on the front of the canvas, billboard style? Is Ed Ruscha shouting at us in all caps?

Enigmatic as his word works are, the artist has not stayed entirely silent about the origins of his compositions. Text accompanying the exhibition explains that Ruscha’s Jones is essentially a fictional construct, an everyman, blue collar Joe whose specific skill set is symbolic of all sorts of lost, ordinary or underappreciated arts among those he’s known throughout his life. Ruscha describes his view as one of “sardonic affection for the forgotten person who doesn’t exist.”

So “Clarence Jones” is an epitaph, a gravestone etched large. Looking closely at the believably rendered landscape, you notice a painterly quality that seems impersonal and formulaic, like a giant paint-by-number. It is an image meant to be seen at a distance, like a stage backdrop. This too is intentional.

The soaring peaks are borrowed, stolen and imagined, quotes or amalgams from travel brochures, magazines and corporate logos. To Ruscha, they are anonymous; “background noise, like backup singers,” he told an opening-night audience at the museum. If that’s the case, the words are a form of lyrics.

Just how Ruscha developed his art of elevating the ordinary is traced through the nearly retrospective selection of artworks in the exhibition. The next gallery showcases his early breakout work, largely based in black-and-white photography, in which items such as cans of Spam or turpentine are given a kind of deadpan passport photo treatment. 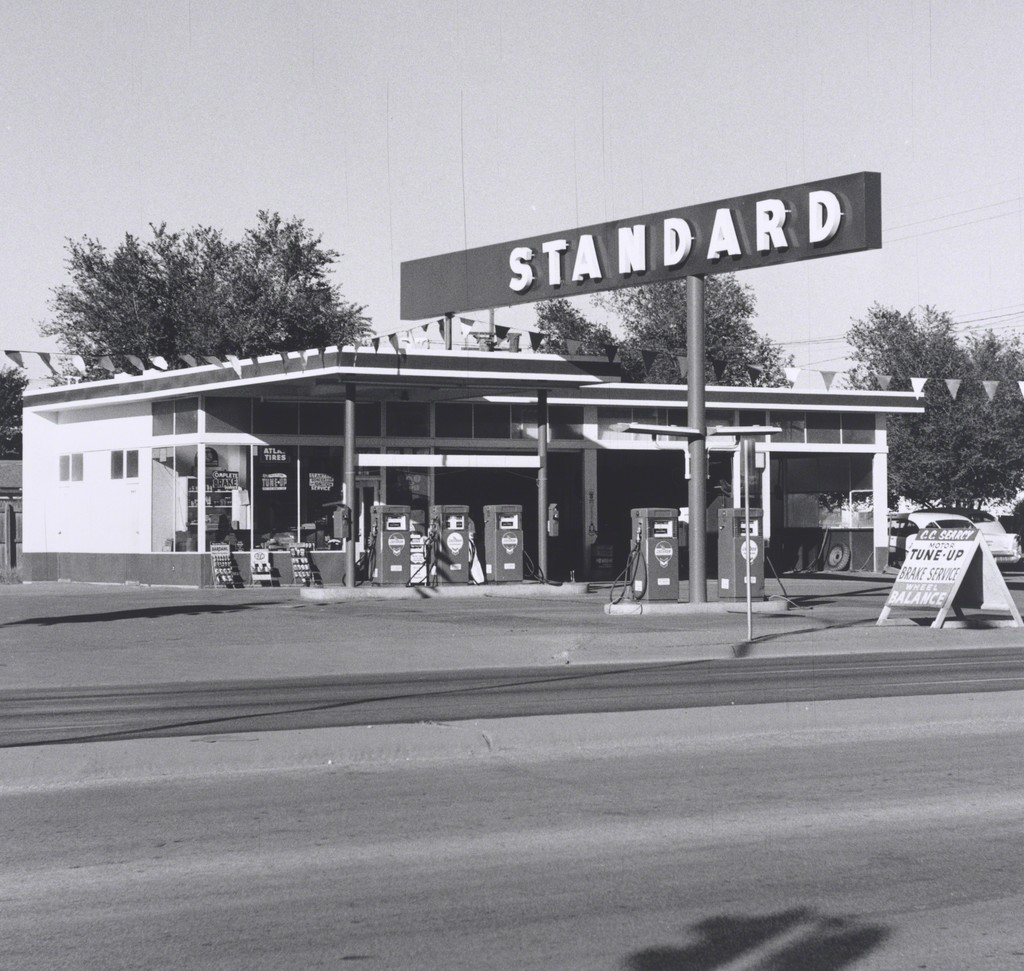 A half dozen artist books (and, yes, you may leaf through them) as well as a series of urban rooftop views demonstrate his penchant for using camera as a fact-collecting tool. His images are neutral but incisive, unsentimentally recognizing a kind of rote but formal repetition within the built environment.

Among the icons in Ruscha’s considerable oeuvre is a black-and-white photograph of a Standard gas station in Amarillo, Texas, taken on a Route 66 journey in 1962. The small, square image captures the station from a driver’s eye view, but it’s the perspectival thrust of the long, narrow Standard sign, with its big block letters, that becomes a talisman for future artworks.

A suite of related screen prints illustrates how Ruscha developed his muse into dynamic compositions that play with architectural abstraction, color attitude and the power of a single word of text to be both a design device and content-rich signifier.

A favorite in the group is “Cheese Mold Standard with Olive,” in which a pimiento-stuffed green olive floats incongruously in the upper right. “I’m dead serious about being nonsensical,” said the artist.

If typography from road signs, ads and consumer products weren’t enough of an accessible reminder about the stickiness of words, then there was the presence of the famed Hollywood sign on the LA horizon.

Ruscha made it the subject of artworks in many media, even explaining that it acted for him as a kind of daily barometer of LA’s famous smog levels. The inky and atmospheric “Hollywood” lithographs in the exhibition are perhaps more factually climatological than romantic.

By the early 1970s, Ruscha was concentrating more on text—both its formal and messaging potential—as its own subject. The screen print suite “News, Mews, Pews, Brews, Stews, Dues” illustrates several important transitions in his work. 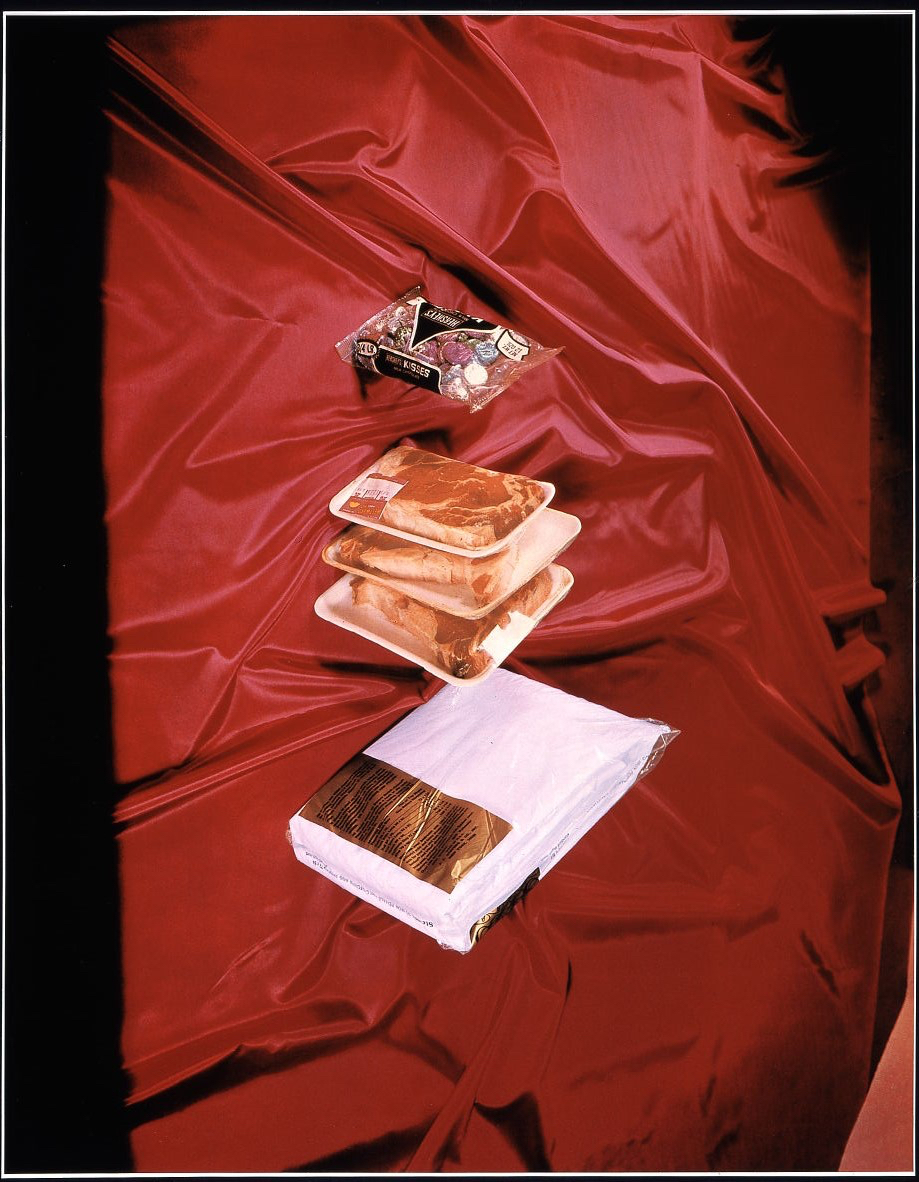 There’s the clever rhyming word scheme; Ruscha would in the course of his career show a deft talent for exploiting the look and sound of words, phrases and quotes, whether read or overheard.

While most of his text compositions utilize an invented “Boy Scout utility modern” typeface, these prints are rendered in a Gothic script, reflective of the visit to London that inspired them. Additionally, the words are rendered large against washy, atmospheric backgrounds intended to mimic the drawing experiments he was conducting with materials such as cherry pie filling, eggs and chocolate syrup.

Some works seem to reflect back especially on Ruscha’s early but short stint in graphic design. “Barns and Farms,” a classic text painting with glowing sunset background, encapsulates simply but effectively every cliché about a bucolic rural America; it is instantly telling, despite the fact that there is neither barn nor farm in sight. “Cold Beer Beautiful Girls,” a lithograph of white text set against a cloud-dappled sky, seems to epitomize someone’s daydream of perfection.

Many of the more recent works in the exhibition represent the range of Ruscha’s love of wordplay. There is a large lithograph of a gauzy sky, the sun obscured by a group of passing clouds. SIN, it proclaims in all caps. Is it an apocalyptic warning? It’s titled “Sin—Without.” Is it merely a translation of the Spanish word? Is it a clever play on “he who is without sin”? Perhaps all of the above?

Ruscha also demonstrates an affinity for short, punchy word combinations that prick the ear or have a good mouth feel. “Sponge Puddle,” “Wall Rocket” and “History Kids” are all splashed onto his familiar mountainside backdrops. “Baby Jet” is a curious excursion into a shaped canvas—notice the slightly bowed sides—which subtly gives it the sensation of looking out of an airplane window. 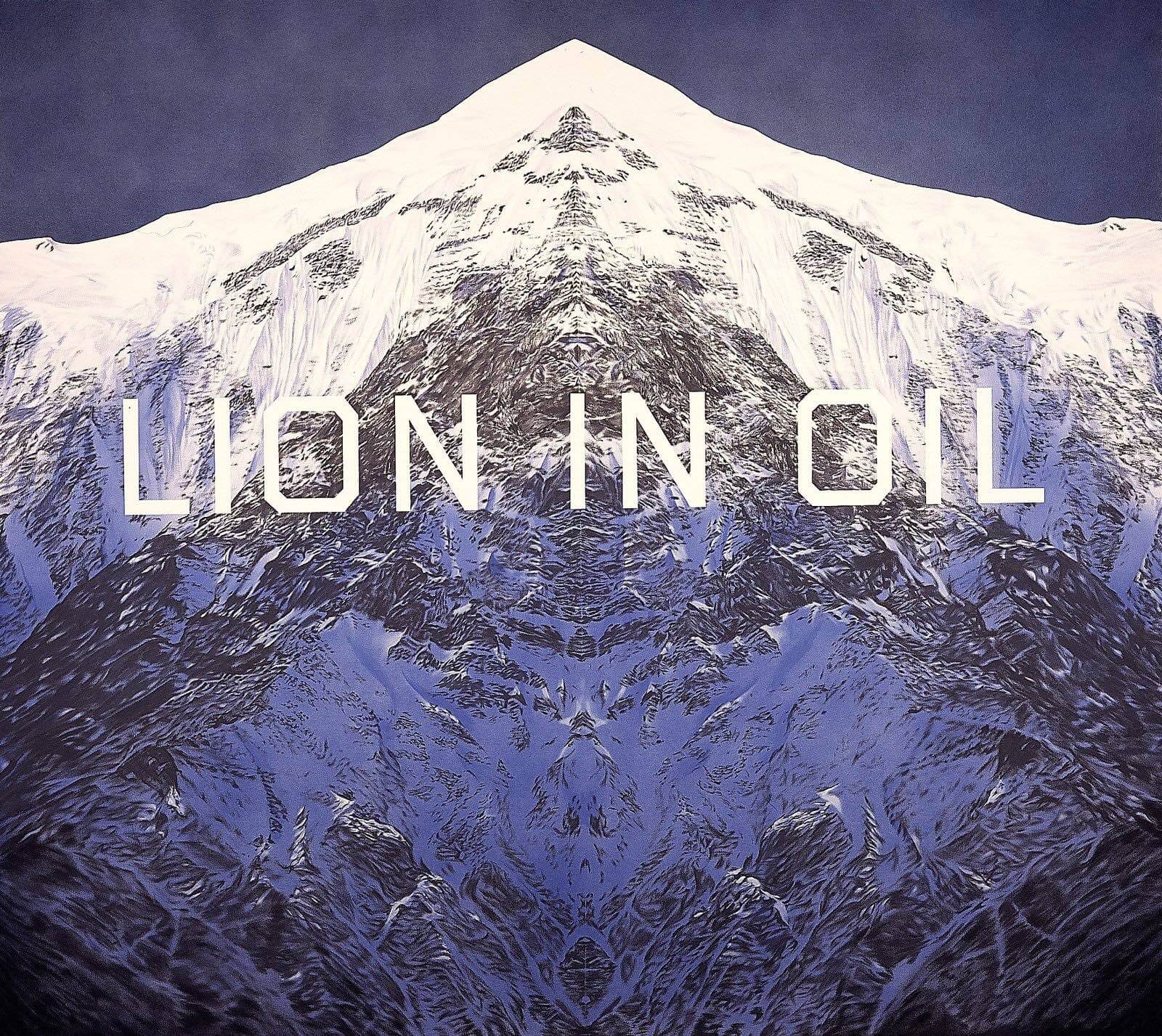 Perhaps most irreverent (or half past clever) are Ruscha’s mirror paintings, such as “Lion in Oil” and “Never Odd or Even.” Each is a verbal and visual palindrome, as both the phrases and mountain images scan the same in each horizontal direction. The effect ends up being somewhat surprising, as the eye is acclimated to think of a mountain peak as a form of Isosceles triangle, as well as to read the text for language and not letters.

In the end, the show confirms Ruscha’s cred as an artist nimble in a wide variety of media, a wry master of the mundane, and an unsentimental observer of the world with a keen ear for its verbal music. Art should, after all, speak to the viewer. And with this show, one thing’s for sure: you’ll get your words’ worth.

Word/Play: Prints, Photographs, and Paintings by Ed Ruscha runs through May 6, 2018, at Joslyn Art Museum. There is an admission fee for this show. The museum is located at 2200 Dodge Street. For further information, visit www.joslyn.org or call 402/342-3300.