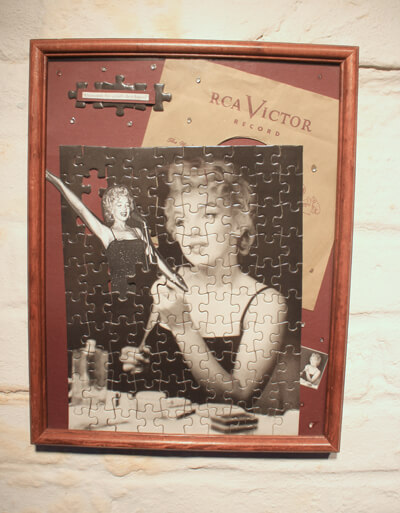 “Brain is the key that sets you free,” are words by Harry Houdini, early 20th century magician, escapist and skeptic posted on artist Mike Kolker’s wall installation in the back of the New BLK Gallery titled “No Escape From Memory” in this month’s 11-11 solo show by the artist.

The installation piece of wooden panels with various Houdini regalia like this quote, his face, and even a drawing of him conducting a Chinese Water Torture Cell Stunt, is fronted with a pair of antique theatre seats from Kolker’s hometown outside of Sioux City, Iowa, so viewers can sit and mull over Houdini’s literal physical struggles from which he was said to have died from (although it was later determined he died from appendicitis).

This piece marked a turning point for the artist who created it while a graphic design student at Wayne University eleven years ago, inspired by artists Joseph Cornell, a mid-20th century American assemblage artist; and Edward Kienholz, a mid-20the century American installation artist.

These artists’ inspiration on the piece are apparent as is the concept of the show: the artists reflected on the last 11 years, some new work created in the last 11 months on 11 themes including: dichotomy, mortality, family, eternity, collaboration, anticipation, preparation, conversation, inspiration, success and failure via assemblages of found objects and sculpture, installation, collage and painting.

But beyond all of these things in this artist’s debut show, what is truly most intriguing is the apparent austere struggle with identity—which ironically began with a quote about allowing the mind to set one free, but with some of his other work, this truth by the famous skeptic is ironically questioned.

In this most recent work, “No Lifeguard in Life,” Kolker assembled four of his own childhood GI Joe toy men (toys are of frequent medium in his work, perhaps his yearning for a life more simple) with black covers over their faces and their arms and legs tied as though they are held hostage; one is held by his legs upside down in a jar with water much like Houdini is hung in the older installation. The pieces are installed on a mirror with a sign posted “Warning No Life Guard on Duty.”

According to the artist the four hostages represent four main responsibilities in his life, and the feeling of being held captive by everything so much so that nothing is quite successful; an alien toy hides underneath, the “bad guys” or the inner demon, fighting the inner soul for freedom.  So, who wins?

“We don’t know yet,” said Kolker, “all we know is it’s a difficult lens, this ‘who am I?’…It’s going to be shitty before it gets better.”

Such is life as with his other pieces, too, more of a mystery than a solution—an assembled Ouija board with unlit matches next to candles; lined up Pez dispensers with candy offered in baggies outside of the candy-holder; a literal puzzle of Marilyn Monroe with the quote “Diamonds are a Girls Best Friend,” a bloody Ken-doll torso with a heart for a head. All are all puzzling testaments to this artist’s search for the unknown.

“The One” is perhaps paramount, a shrine-like assemblage of a headless Barbie with feathered angel wings and a tiny heart offered to viewers inside a velvet-lined box with a string of lights and gold string lining. The box is held up by a classic column and two small headless Greek sculptures tied up in string.

According to the artist the piece was built before he met his wife, a sort of pre-honorarium for who would be the love, the all in his life. It is beautifully crafted and perfectly placed in the front of the gallery inset.  What is perhaps symbolized by the piece after viewing his juxtaposed show of eleven this-and-that with the Barbie’s lack of mind, is his own unknown artistic self; but what he does offer, as the doll gives away the heart, is tremendous authentic intention.

“What I want is to get peoples’ cogs turning,” Kolker said, an energetic admissions advisor at Bellevue University and father of two, “I want people to embrace each piece in their complex own way. It is about the never-ending battle with ourselves and life.”

Viewers can keep up with Mike Kolker as he continues to create work and update fans on the 11th of each month through the next 11 months on his blog at upat5am.com.

11 | 11 an art show featuring the work of Mike Kolker, is on view at The New BLK Gallery, 1213 Jones St, through November. For hours and details visit thenewblk.com.