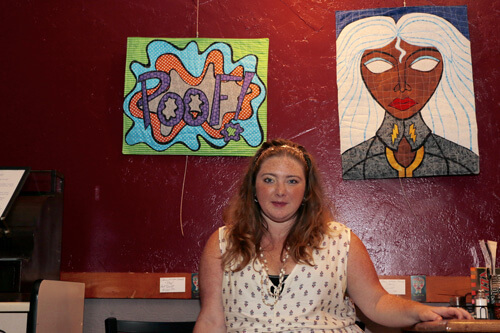 In the underpaid (and often never paid) world of Omaha theater, an artist’s most valuable resource is their time. How we spend that time is often a struggle between the two things most precious to us: our art and our family. Madeline Radcliff-Reilly of the newly-formed FireBelly Rep theater knows this all too well.

As a young child, her parents Judy and the late Cliff Radcliff — both graduates of the University of Nebraska-Lincoln theater program — put their artistic aspirations on hold to provide for her and her brother.

“When I was little, I would look through these books that had all of their production photos and newspaper clippings,” Radcliff-Reilly said. “They would highlight their names and make these little collage pages. I didn’t see either of my parents act until I was 16, so that was my only connection to what they used to do. I loved it. I would sit there for hours and look at them.”

Now she has a family of her own with her husband, fellow playwright and FireBelly Rep member Brendan JD Reilly and his son, Brendan, or ‘Brau Brau’. Life is split between work, family and creative passion. It’s a difficult, delicate but rewarding balance as any artist who’s a parent will tell you. But Maddie and Brendan didn’t want to completely abandon their creative aspirations. They thought that there must be a way to strike a better balance between life and art. That’s when she ran into local playwright and mother, Beaufield Berry, at this summer’s Great Plains Theatre Conference. Berry sparked the conversation and the three of them, along with fellow founding member, writer and father Jeremy Johnson, started FireBelly Rep, a playwright-driven theater.

“Every time the Great Plains Theatre Conference happens we say, ‘We should do this!,’” she said. “This year we all just got to a place where we didn’t want to let the opportunity slip by. We didn’t want to get too old or too set in our ways before we gave it a shot. It all kind of worked out in this snowball kind of way.”

Radcliff-Reilly describes FireBelly as “low-commitment theater dedicated to the playwright’s vision.” The rehearsal process is just as brief as the run in many cases. A couple of weeks of rehearsal, a week of performances and it’s off to the next project, all the while making sure everyone has time for life in between. Allowing everyone the chance to be with their family while actively creating art was key for the group.

“When I was growing up I had two incredibly talented parents that never got on the stage because they didn’t want to sacrifice that time,” she said. “I don’t want to sacrifice that time either. I don’t think any of us do. But trying to meet those two worlds is challenging. With Brau Brau, we don’t have him every day but Jeremy and Beau do have their kids every day. It’s a matter of understanding that things can happen. Sometimes your kid needs you and that can be okay without negatively affecting the production you are putting forth. That’s why we are all weaving in and out of the roles necessary to put on a show that works.”

That inaugural show is Radcliff-Reilly’s existential comedy, The Curious Disappearance of Mulder, the Cat, to be performed at the PS Collective from August 12-14. The show revolves around four people whose lives intersect during the search for the aforementioned cat. It’s a script that Radcliff-Reilly worked on and off for eight years after being assigned to write it by Scott Working in a playwriting class at Metropolitan Community College.

“He asked us to write something that was absurdist,” she said. “The only things I had written up to that point were very realistic, so it was a stretch for me. That’s where the idea came from and it’s changed drastically since then. I think it took eight years because it was something that wasn’t naturally coming out of me at first. I had to find my way to the story in front of me.”

Radliff-Reilly said she’s always been a writer, but writing plays is something that brings her back to why she helped start FireBelly in the first place: family and theater.

“Once my parents got back into theater, I got into it. I’ve been writing since 4th grade so it just made sense to merge those two things together,” she said.

Along with the focus of quick and flexible theatrical productions, the main focus of FireBelly is to serve the words of the playwright in the best way possible. While there is already a space for local writers in Omaha in the Shelterbelt Theatre (which has produced many FireBelly members’ work), the collective of writers thought they could take the involvement of the playwright even further.

“It came out of past experiences that all of us had with saying, ‘This is my vision and it wasn’t achieved in the way I thought it was going to be.’ Working together, we want it to be that you walk in the door and you walk into the writer’s mind from start to finish,” she said. “That’s important to us because I think that there can be a disconnect sometimes where you miss the messages. We’re pretty passionate about the messages. One of our mottos is that we are a ‘House of Yes.’ We want people to come in with their crazy idea and we don’t want to hear how it can’t be done. We want to say, ‘Yes, we’re going to do that.’ It’s been working well so far.’”

Radcliff-Reilly said that working with like-minded artists in a company of their own has re-invigorated her love for theater, almost as much as the love for her family.

“The first play I wrote was cathartic for me,” she said. “It was after my dad passed away. The release that it gave me, to take this story that was mine, change it and then give it back to the world was an incredible feeling for me. That’s what I feel I do every time I write. I think that everyone has stories inside of them that everyone should hear. But honestly, even if no one ever hears it, it’s still something I’m giving to the world. Some of it is for my psychological care for myself, but a lot of it is that I’m interested in people. I’m interested in how they work. I’m interested in creating those relationships and putting them up on stage.”

FireBelly Rep’s production of The Curious Disappearance of Mulder, the Cat runs August 12-14 at 7 p.m. at the PS Collective, 6056 Maple Street. Visit firebellyrep.com for more information.

*  RECOMMENDED CONFIGURATION VARIABLES: EDIT AND UNCOMMENT THE SECTION BELOW TO INSERT DYNAMIC VALUES FROM YOUR PLATFORM OR CMS.

*  LEARN WHY DEFINING THESE VARIABLES IS IMPORTANT: https://disqus.com/admin/universalcode/#configuration-variables */