Home » Art » Literary » A Dame Walks Into a Bar 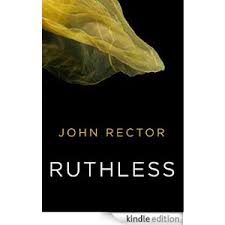 John Rector’s new novel, Ruthless, is full of action. However, it is lacking a little in the suspense department.

Reading this novel was a bit like reading a choose-your-own-adventure book, but after you had already looked ahead and knew what was going to happen. Except you didn’t have to look ahead.

I don’t generally read noir, thriller type novels, but I was looking forward to this one because the writer lives here in Omaha and I love supporting local writers and artists. However, I was a bit disappointed in this book.

The premise reads like an old detective story, which, if I am to judge based on what I’ve heard about his other books, I believe is intentional.

A down-on-his-luck reporter drinking in a bar encounters a mysterious, blond woman who mistakes him for a contract killer and give him a manila envelope full of money and a picture of the intended target. Once he discovers the mistake, it’s too late. He’s been hired to kill a pretty blond girl and he doesn’t know why. You can probably guess the rest of the story.

From the gambling addict journalist as the protagonist to the retired cop father and the bitter soon-to-be ex-wife, the book seemed to be full of predictable clichés. Obviously, I do believe the author is aware of this and wrote it in that manner intentionally. I think he was counting on the twist at the end to bring it to a different level, but even that was a bit of a letdown, mainly because that part of the story line was never wrapped up.

Perhaps Rector is going to write a sequel? Or maybe he was just going for that kind of existential, leave them thinking kind of ending. Either way, I was left unsatisfied and a little disappointed after putting this book down.

On the other hand, maybe the fact that I wanted there to be more is a good sign. As I said, I don’t generally read these types of books, so maybe it just wasn’t my cup of tea. But I genuinely want to know what happens to these characters after the story ends, so I think that says something good about his character development.

Also, Rector does know how to pack in the drama and every chapter was a cliffhanger. It’s just unfortunate that oftentimes, I was able to see over the cliff and predict what was coming.

But I have to say, if you like thrillers, mysteries and old-timey detective stories, you will probably enjoy this book. It’s a fast-paced, quick read and probably a better way to kill a lazy summer afternoon than binge-watching bad sitcoms on Netflix. Not that I’ve ever done that …