Home » Art » Literary » A fairy tale for the young at heart 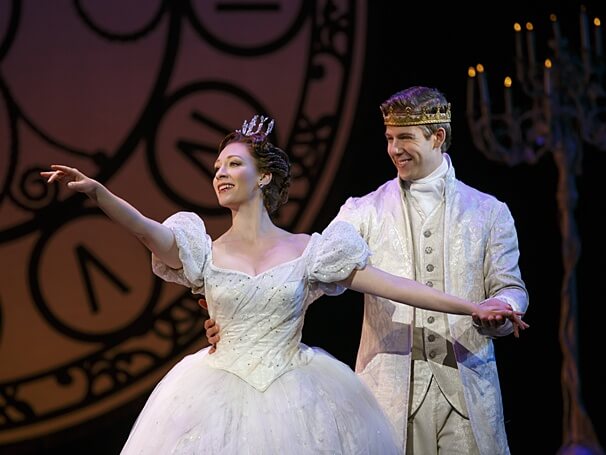 The legend of Cinderella continues to proliferate and transmogrify. At the Orpheum Theater, witness a 2013 transformation by playwright Douglas Carter Beane, for a musical with songs by other legends, Richard Rodgers and Oscar Hammerstein.  R & H created their magic for TV in 1957. That show too has materialized and transformed over the years.

Once upon a time, the tale surfaced in ninth century China, resembling one from 7 B.C. Soon another much like it became a permanent part of cultures world-wide. The best- known written version emerged in 1634 Naples where the story was set. La  cenerentola, who had to clean up ashes, was the girl at the heart and hearth. As she was in an adaptation about 60 years later by Charles Perrault in something new a “fairy tale.”   Not long thereafter the Brothers Grimm re-worked that, now a permanent part of Western culture.

Regardless of where and when it surfaced, the major focus is on unjust oppression and ultimate reward affecting a young woman with an unfortunate life on her way to fortune and fame. Over time, some feminists may have taken issue with the idea that marrying a rich and powerful man could be a desirable goal for a woman. But that would be a simplistic view about a story full of significant symbolisms.

Beane’s script, with new characters and one sympathetic stepsister, makes the prince named “Topher” naïve about unhappy social conditions in his kingdom. But clever Cinderella opens his eyes and manages to get him to take charge for a brighter future. (Spoiler). Everyone still lives happily ever after, even the peasants

The current production arrives full of special effects, Tony Award-winning costumes and colorful choreography. This ran on Broadway for almost two years and was nominated for eight more Tonys.

Rodgers waltz-filled score, also features polkas and marches, good choices for a fable like this. The source of this music is not only the original TV version but also others with Oscar Hammerstein, going back as far as 1947, the year of their third collaboration Allegro. Those old songs, shoe-horned in, were originally dropped from South Pacific, The King and I and elsewhere.  Many of Hammerstein’s original lyrics have been retained, but some have been reworked by Douglas Carter Beane and David Chase.

Beane, FYI, wrote the scripts for the musicals Sister Act and Xanadu and more plus such plays as The Country Club and As Bees in Honey Drown. https://en.wikipedia.org/wiki/Douglas_Carter_Beane#Broadway.

One might say that this Cinderella is one of those old-fashioned shows. But this kind of thing is always in fashion. And the legend of a girl transformed has endured across continents and time. It thrives.