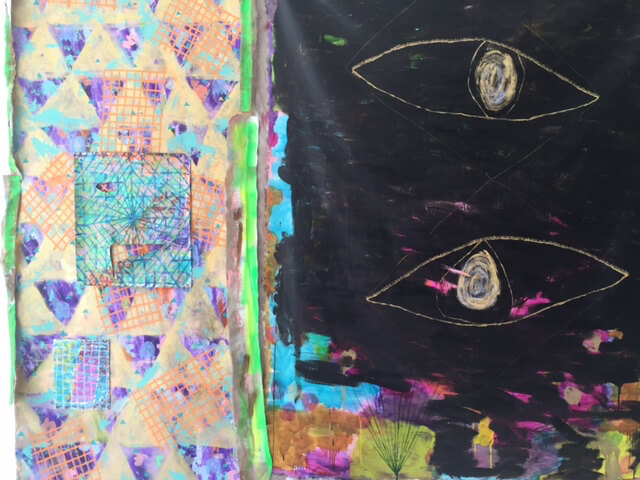 Darger HQ, has opened its new space at 1804 Vinton Street with it first show, A Hex, A Hoax, A Guest, A Ghost.  Managed and curated by Launa Bacon, the venue features a two-person show by Lincoln artist/educator Anthony Hawley and Rhode Island artist Kirstin Lamb, which continues until June 12.

Their common fascination with narrative as well as pictorial cliché in painting seems a logical result of educational backgrounds for both artists in literature as well as in art.

They see the “Hex” as a talisman, referring to good luck as well as mystery—a strange, magical spell occurring when the “Hex” and ghosts meet each other, while “Hoax” means it’s all made up, or artificial—an absurd arrangement of parts that just might come together in a poetic relationship which makes a sort of everyday magic.

Hawkins works with large-scale multimedia projects using painting and drawing, short film and contemporary art research with the goal of addressing the current human need for both artistic and social change.

After growing up in Massachusetts, he earned his undergraduate degree in Italian Literature and Japanese Literature and Film.  Hawkins graduated with an MFA in the Art Practices Program at the School of Visual Arts, Columbia, and has been teaching art at UNL for four years.

Lamb’s side of the exhibit is based on a large collection of photographs, paper ephemera and fabric, which the artist has hand-painted, making pictures within pictures, which are staged, and arranged in space.

Based on traditional lap-crafted original works, the result becomes a billboard for handmade and intimate craft, which has been restaged in paint.  Her goal is to “overwhelm and overfeed with sweetness, as well as chastise its attendant guilt. My gendered role was not all I’d hoped for or all that I was promised.”

Lamb sees art making as a way to bring something new into being—a “specific beauty.”  She sees the resulting “portrait” as one that might represent every woman—an echo of artist Kiki Smith’s goal of having women stand for humans.

Lamb did both her undergraduate and graduate work in both art and English at Rhode Island School of Design.  She currently lives and works in Providence, Rhode Island.