Home » Art » Literary » A legend flies at The Rose. 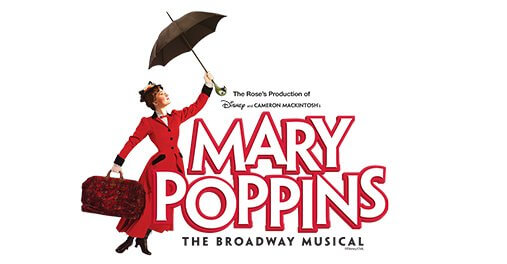 The Rose Theater is flying and bloomin’ all over the place with its new full-length production of Mary Poppins Cameron Mackintosh’s 2004 stage transformation of the Disney musical film. “Astonishing things happen on stage,” says director Matthew Gutschick. Hall Associates Flying Effects adds to the magic. The 27 member cast and the 12-member orchestra directed by Kevin Smith enrich the results,performing songs from the 1964 Oscar-winning  score by Richard M. Sherman and Robert B. Sherman and newer ones by George Stiles and Anthony Drewe.  P.L. Travers’ beloved  stories are the original source, elements from which, though not in the film, are within these new pages. The fresh script was penned by Julian Fellowes, subsequently lauded, six years later, for creating, writing and producing TV legend Downton Abbey. The focus of the locus for the hocus-pocus is wherein lives the Banks family. The frequently unseemly behavior of young offspring Jane and Michael has had other nannies flying away from the domicile, one could say, until a new one flies in with special gifts to alter the children’s conduct and perceptions. Meanwhile, their parents have lessons to learn as well. Chimney sweep Bert has a hand in clearing up things to warm their lives. FYI: The Sherman Brothers wrote more motion-picture musical scores than any other songwriting team in film history, including those for Chitty Chitty Bang Bang, The Jungle Book, Charlotte’s Web and The Parent Trap . Their original Broadway show, Tony -nominated hit Over Here! was the biggest-grossing musical of 1974. Stiles and Drewe have collaborated on nine shows together while Stiles has also created music for other productions on his own, winning multiple awards.  Be prepared, old thing, when “Supercalifragilisticexpialidocious” resounds, you may find yourself giving it whirl. Audience singing -along may occur. You needn’t ask permission.