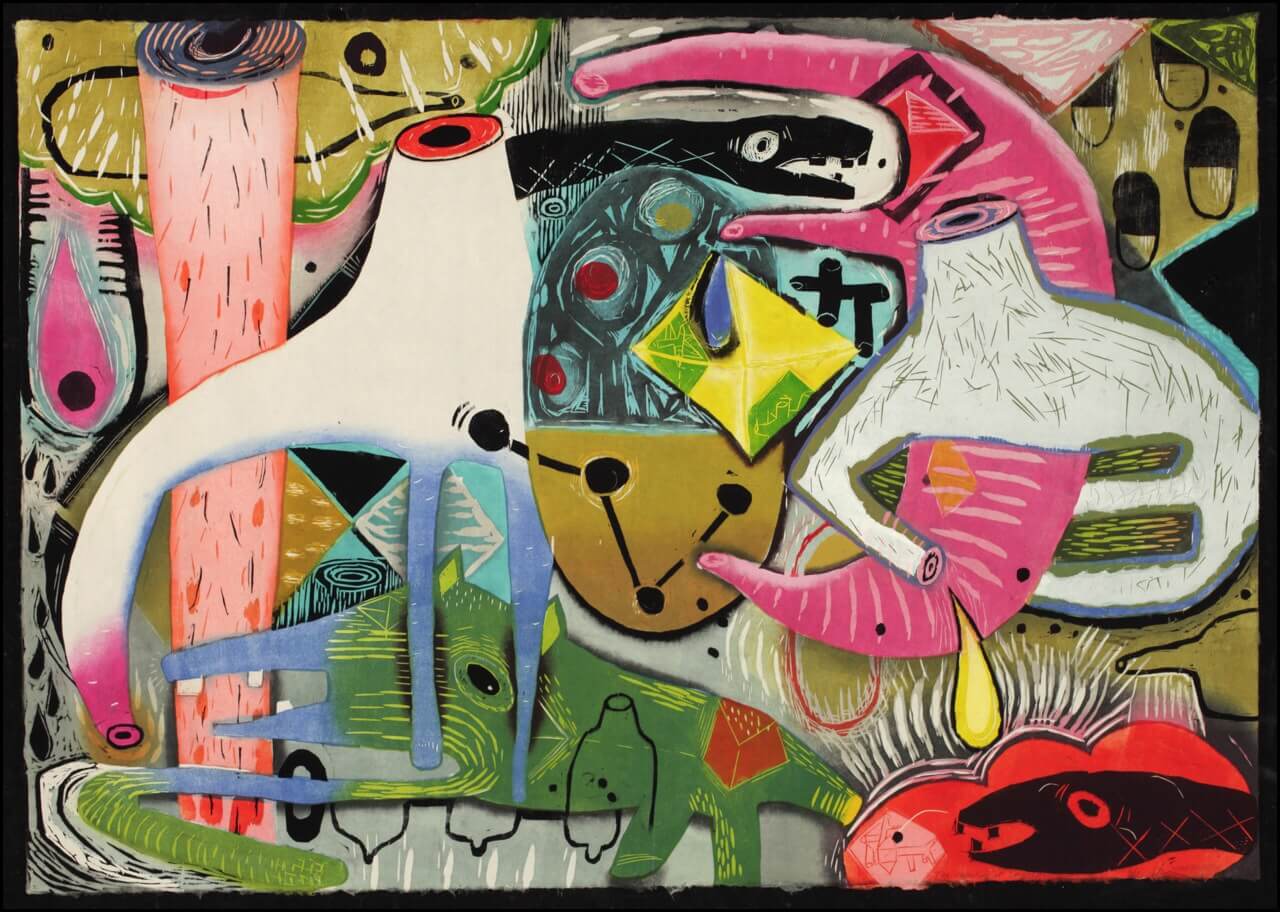 Before we close the door on 2014 with a hopeful eye on the future, lets look at the past year, particularly in an area of popular culture that gets short shrift in mainstream and social media despite its contribution to the quality of “the Good Life” in Nebraska.

Fortunately, the relative success of the visual arts in the Metro, unlike political elections and football, isn’t measured in win/loss columns, playoffs or runoffs or in the exchange of money and influence—though admittedly, the boards and sponsors of arts institutions have a huge impact, and the marketplace certainly determines the fortune of galleries and artists alike.

Nevertheless, despite the pluses and minuses, in any given year arts venues, patrons and collectors can always find value in what artists, curators and galleries bring to the party. It’s a matter of perspective and priorities, or how one spends one’s time, energy and money. If you engaged in any or all of the above with the visual arts in 2014, it was well spent.

At least that’s the summation of the annual A-List, the Reader’s guide to the most significant events and exhibits in the Metro that impacted the contemporary art scene. What follows is mostly the opinion of this editor, but it reflects also those of our staff of arts writers including Mary Day, Eddith Buis, Laura Vranes, Joel Damon and David Thompson whose reviews can be seen at thereader.com.

Per usual, the Metro’s biggest arts events in 2014, scheduled or otherwise, took place at or through its largest institutions, Joslyn Art Museum, the Kaneko/Open Space for Your Mind and Bemis Center for the Contemporary Arts. Joslyn inaugurated its new Riley CAP Gallery, thus guaranteeing its commitment to curated contemporary art exhibits. Of no less importance, it also opened its Art Works space, “A Place for Curiosity,” whose interactive stations engage all age groups.

The Kaneko is currently enjoying its remarkable event, “Open Space Soiree,” which features three ongoing art and architectural exhibits by Cedric Hartman, Wallace Cunningham and the Olson Kundig Group. Highlights include not only artist talks but also multiple opportunities to explore what continue to be the most urbane and sophisticated viewing spaces in the Metro.

Just a block away, the storied Bemis Center continued its challenging transition under new leadership and vision with curatorial and spatial experimentation of its own. First, Mary Mattingly brought her “Flock House Project” to Omaha that amounted to a successful community engagement citywide. Secondly, two recent events, “Realm of the Senses” and “Circus of the Senses,” created by former Bemis resident, Emillie Baltz, were worthwhile sensual, artful experiences. Less traditional fundraisers for several reasons, they were instead, needed “fun or friend raisers,” that is, for those with an open mind.

Every year is marked by fond but often sad farewells, and 2014 was no exception. Norman Geske, the first director of the Sheldon Museum of Art in Lincoln died in December. Suffice it to say, that no one during his nearly 100 years had a greater influence in area visual arts than this vaunted “Father of Nebraska Art.”

The year also witnessed the passing of a gallery, an arts publication and a public art project, all of which the Metro arts scene can ill afford: Arts entrepreneur Jean Imray closed her Dundee Gallery leaving a difficult vacancy to fill, Artland Magazine, launched two years ago, disappeared after the departure of its editor Greg Nosan and museum director Daniel Veneciano, also leaving an unfortunate publishing void of its own;

The much appreciated “Stored Potential’ banners that graced the towering silos along eastbound I80 have also “disappeared” along with their sponsor, Emerging Terrain. The agency has said the banners were never intended to be permanent which is a shame. The daily commute hasn’t been the same since.

On a more positive note, the Metro proudly saw two of its artists, Angela Drakeford and Watie White, get accepted to the estimable national exhibit, State of the Art, at the Crystal Bridges Museum of American Art in Bentonville, Arkansas. The show honors artists from all over America, 102 in all, deserving wider recognition outside their region. It’s on view till Jan. 11 and well worth the six-hour drive south.

Although the Bemis Center officially closed it Underground in 2014, that didn’t prevent its former curator, Joel Damon, from going forward on behalf of Metro emerging artists. Collaborating with fellow artists/mentors Josh Powell and Jeff King and sponsor Jay Rybin, Project Project, a concept and space, was launched in September and shows monthly at 1822 Vinton St. with hope and room to grow.

Virtually, every year a major arts venue organizes an exhibit that becomes a larger than life event because it offers viewers a rare opportunity to appreciate contemporary art of great cultural and historical significance. In 2014 that distinction belongs to Joslyn’s In Living Color: Andy Warhol and Contemporary Printmaking, on view through Jan. 11, 2015. Spinoff events included a drag show and Studio 54 dance party, and a series of films from the Warhol Factory screened at Film Streams.

2014 also saw Gallery 72 host an eventful book signing and show, Her Art/HerSelf, a collection of 48 profiles by writer Suzanne Smith Arney for Her Magazine. The gallery also included a two exhibit of artists featrured in Smith Arney’s book.

Lastly, the long-anticipated “Big Mo” sculpture by renowned artist Mark di Suvero, and a public art project of the Iowa West Foundation, has finally begun its installation at the Tom Hanafan River’s Edge Park. Along with works by William King, Jun Kaneko, Deborah Masuoka, and Albert Paley, among others, Council Bluffs continues to display the most original, impressive public art in the Metro.

Individual artworks aside, the 2014 A-List also acknowledges more than 30 exhibits that stood out from more than 100 that opened this year. Fifty or so were reviewed by Reader. Honoring 30 of them may seem like a lot, but the A-List has always been about inclusion and recognition. It also argues that while there may not have been a good number of great shows, there were a great number of good ones deserving the spotlight.

Exhibits are grouped at three levels, 9 or 10 each, with the top four in each tier singled out based on their vision and creativity as well as curatorial guidance, presentation and didactic support. Exhibit details can often be found online in Reader’s archive of art reviews.

The top tier of the A-List contains shows that not only met but exceeded expectations, virtually all of museum quality. They include especially: Hannibal by Littleton Alston, shown at Creighton University’s Lied Gallery which offered his monumental helmets embellished by tractor tires and bowling pins, both historic and contemporary in theme;

Moving Gallery’s classic exhibit of Eva Aeppli’s mixed media sculpture and her late husband Sam Mercer’s paintings, easily the most moving two-person show of the year; Roberto Kusterle, who also exhibited with Fulvio de Pellegrin at Moving Gallery, enjoyed a more unified show at Modern Arts Midtown titled Stone Marks, highlighting his most uniquely figurative photography; and the funkiest, edgiest exhibit of the year, cardboard, curated by Kim Reid Kuhn at RNG Gallery and in the tradition of the best shows at the late Underground space at Bemis.

Mid level shows of merit in 2014 were often just as interesting but perhaps not as consistent as those above. The top four in this tier were: The Sum of Us at Bemis featuring six Kansas City artists in arguably the season’s most challenging contemporary art show; Kent Behrens gave a fine showing of his most current plant-based photography at Moving Gallery; Jeff King and Reggie Le Flore had possibly the best collaboration show in 2014, The Subconscious Element with their street-based mixed media at the Union for Contemporary Arts’ Wanda D. Ewing Gallery at 2221 N 24th St.; Lynn Piper’s remarkable, part naïve, part personal art, Joy of Painting, soloed at MAM.

But also impressive in this tier were: the odd, but effective pairing of two very different established artists, painter Joe Broghammer and primarily sculptor Larry Sosso at Patrick Drickey’s evolving gallery space at 1516 Leavenworth; one of the most fertile, creative minds in the region, Jamie Burmeister, who offered his contemporary zoetropes at MAM; Rise and Fall: Monumental Duct Tape Drawings by Joe Girandola at Moving Gallery; another highly successful group show, Visual Textures, at G72; and standout shows at two top Benson First Friday galleries, Artists, Shrines and Reliquaries at Sweatshop and Lincolnite Jar Schepers’ triumphant return to Omaha at Petshop with more of his fantasy and fantastic sculptural figures.

The last tier is often reserved for emerging artists or those whose transitions or experiments may not yet be fully realized but demonstrate huge promise, or some who may have stalled but with nevertheless interesting work that continues to please. The top four here are: A well-organized group show of works on paper, Brass Tax Screen Print, at Sweatshop; We’re Still Standing, a poignant, two-person show with Native American artists Steve Tamayo and Paul High Horse at Kaneko; The Cards You Are Dealt, street-influenced artist Freddy Rincon’s follow-up show at RNG Gallery; and the ambitious, mostly successful, large group show, 2014 Survey: Omaha Artists, curated by Alex Priest at W. Dale Clark downtown library.