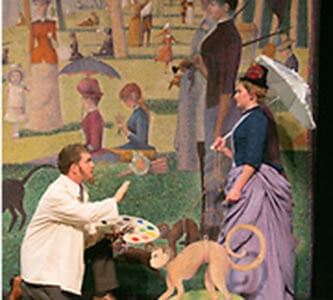 “Order. Design. Composition. Tone. Form. Symmetry. Balance.”  George calls them forth. On a Sunday afternoon. In the park. There will be days, evenings, when such elements are called forth again. As the brilliance, the charm, the magic, the beauty of Stephen Sondheim’s music and lyrics take the stage at Creighton U. And swiftly fade into what could be an indelible memory. Two weekends only.

This is an exposure to and an immersion in Sunday in the Park with George, the 1984 Pulitzer Prize-winning musical which garnered multiple awards and ran for 17 months on Broadway. James Lapine wrote the book after he and Sondheim were equally inspired to look behind the canvas of pointillist painter Georges Seurat’s masterpiece “A Sunday Afternoon on the Island of La Grande Jatte.” Particularly so, Lapine pointed out, because one major figure was missing from the many individuals represented: the artist himself. Thus the two modern-day theatre artists came up with this brilliant meditation on art, emotional connection and community, reaching into the present to portray a fictional great-grandson of the Frenchman, another George, dealing with the same issues.

Creighton’s Amy Lane is the director, one of the people behind multiple Theatre Arts Guild awards for the April production of Cabaret, which has lit up a spotlight on the University’ s Theatre Arts department.

New York actor and Creighton Musical Theatre 2011 alum Dan Tracy interprets both Georges. He’s since had roles off-Broadway in Pipeline Theatre Company’s production of Adam Szymkowicz’s Clown Bar and in the Hudson Valley Shakespeare Festival. http://www.dtracy.com/about.html . Other guest performers are Therese Rennells and Chloe Irwin. The rest of the 16 members of the cast are Creighton U. students. The orchestra consists of musicians from the community and the university.

Isn’t it lovely how artists can capture us?