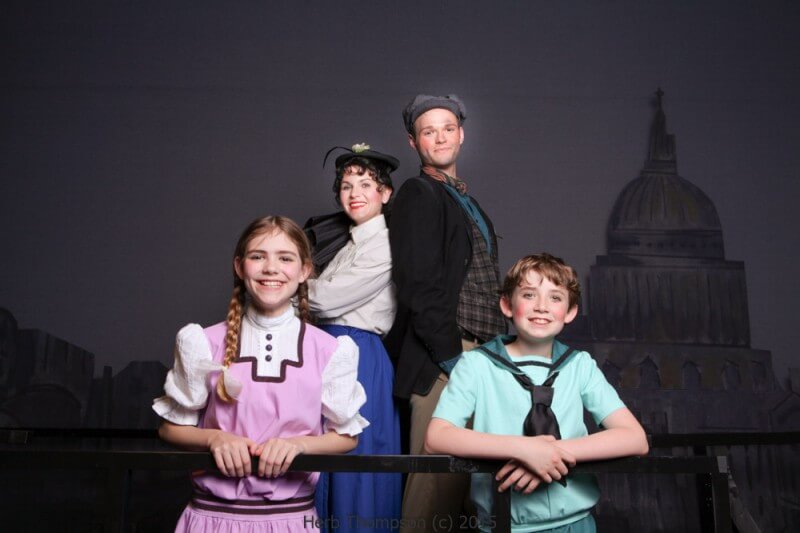 You’ve no doubt heard that Mary Poppins The Broadway Musical is full of magic. So you’ll be delighted to know that magic thrives in a new production of it at The Rose Theater. Witness magical ensemble dancing and singing in a delightful array of costumes amid wonderfully inventive sets. Plus, the 27 member cast and the 13 musician orchestra led by Kevin Smith make the best songs charm and delight.

Those songs come from the 1964 Disney movie’s Oscar-winning score by Richard  M. Sherman and Robert B. Sherman with newer ones by George Stiles and Anthony Drewe.

The performances reach their apogee, appropriately, in an excitingly memorable roof-top song “Step in Time,” during Act II wherein chimney sweeps are bouncing, tapping, soaring and stomping. Gifted Patrick Beasley is there too as Bert, the main sweep, strutting his stuff with all the non-stop charm and élan he displays throughout the two hours and forty minutes it takes to wrap up this welcome package.

But before that and beyond, multiple well-staged production numbers never cease to amaze due to  the ensemble’s skill and discipline. Notice especially Booton’s imaginatively-conceived human merry-go-round.

It’s probable that you know this tale about an English family’s vicissitudes whose somewhat discouraged moments become transformed by the presence of a nanny with slightly more than human aptitudes. Suffice to say that pre-teen youngsters Jane and Michael Banks need the right kind of affectionate guidance which their parents are at a loss to provide. When Mary becomes their nanny it takes a while before the young ones reform their naughty ways. Meanwhile Mr. Banks grows increasingly distraught over fear of losing his job. None of these problems, however, run very deep. They are the underpinnings of an entertainment vehicle. Sure, a few object lessons, morals within the story, lie within the dominant sweetness, but the medicine goes down nearly imperceptibly.

I call your attention to the clever idea of having chimney sweep Bert as narrator/observer and participant. Given his livelihood, he can see the sometimes darker side of London life from outside and above. Moreover, equally inventive, when he sings “Chim, chim, cheree” he’s referring to that inside part of the house on Cherry Tree Lane which he knows so well.

As Mary, Leanne Hill Carlson has a fine voice. Plus Joseph Dignoti and Maggie Mitchell give Mr. and Mrs. Banks believable substance.

Julian Fellowes’ script has some potentially amusing elements such as making a presumably terrifying nanny for Jane and Michael, Miss Lark, a source of dread for Mr. Banks and his boss. Those men, when children suffered to come under her. Julia Mackenzie, looking young and not the least fearful doesn’t match the role. She sings, however, astonishingly.

Potentially humorous dialogue got lost when I attended, no doubt muddied by the inevitable distortions in the sound system amplification. There were no laughs from the always attentive audience, adults and children.  The songs, though, all came across perfectly. The dialogue suffered. It often does at The Rose when actors project forcefully into body microphones instead of talking at more normal level. Interestingly, despite that and the considerable length of this show, I noticed no restlessness among the children.

As for the big special effects, as the moments fly by, audience expectations may have to stay grounded until the last moment of Act I.  Act II has more of them. More important, this show has multiple merits not dependent on visual elements.  The performances and the songs do everything right, everything needed to make this a good show.