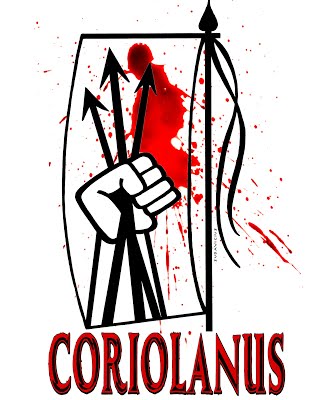 It’s not often that you get the chance to witness one of Shakespeare’s last tragedies, the infrequently-produced Coriolanus, which many critics see as a natural choice in times of political turmoil while also viewing it as confronting socialism. You have a fleeting chance to make up your own mind this month. Nebraska Shakespeare offers one performance only, a staged reading.

Artistic Director Vincent Carlson-Brown gets it together and takes on the title role in what T. S. Eliot  famously proclaimed to be one of the playwright’s greatest tragic achievements.

The play is based on histories concerning Roman leader Caius Marcius Coriolanus, during the early days of the Roman Republic. It was a time when the populous was newly and adamantly opposed to anyone having absolute power. Discontent with government was rife. The title character, who may or may not have actually lived, was a victorious general. In the play he’s offered considerable power and prestige, provided he willingly submits to the will of the people. But his stubborn, caustic pride and his refusal to curry favor, brings about his downfall and death. An arrogant man on the public stage who’s not one to compromise. Isn’t there some such person now on America’s political scene?

“Too often such leaders have to be PC, but there can be great release in telling people what you think of them,” Carlson-Brown points out. The tragedy lies in many directions not only due to Coriolanus’ self-destruction, but also due to his vulnerability in private life while committed to a public one.

A challenging role for Carlson-Brown, one taken on, among others, by Laurence Olivier, Richard Burton, Anthony Hopkins, Ian McKellen and more recently by Morgan Freeman, Christopher Walken and Ralph Fiennes.

This chance to know the play better involves a 14-member cast in Carlson-Brown’s adaptation for the Nebraska Shakespeare’s Director’s Reading Series.(Full disclosure: I have a small role.) A subsequent audience discussion offers the chance to exchange ideas about meanings and interpretations.