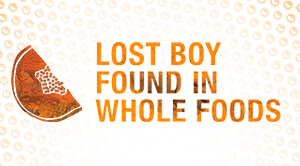 The title Lost Boy Found in Whole Foods may suggest something jocular or whimsical. But Tammy Ryan’s 2010 play of that name aims to be deeper and emotional.

In it, a white American middle-aged, clearly affluent single mom connects with a Sudanese refugee working in the market and decides to make his life more meaningful, having him live with her and her teenage daughter. Social responsibility and compassion are the motivations. To make such intentions manifest cannot come easily. The woman, inevitably, finds that she had been losing something of her own. She may find a path to clarity.

Ryan not only explores both people’s internal journeys but also reveals much about which few of us are knowledgeable. The background is Sudan’s 12-year-long second civil war that preceded the genocide in Darfur. During that war, countless young men were orphaned or separated from families and, despite being severely traumatized, walked to international relief camps.  About 4,000 of them were later resettled in the U.S. https://en.wikipedia.org/wiki/Lost_Boys_of_Sudan

This was, of course, not a unique event. Widespread brutality, deaths, terror-stricken migrations and escapes to refugee camps have gone on over and over in many parts of Africa and other parts of the world. The story is alive today, as you know, along Europe’s borders, and deep in tumultuous Middle Eastern Arab lands.

This drama, although in Ryan’s hometown of Pittsburgh, could take place anywhere/ She hopes to delve into the vast divide between our own prosperous ways of life and the struggle to survive in far-away Third World societies. And to explore the communality of family ties and diverse senses of self, especially in portraying beliefs and rituals of a culture alien to average Americans.

This winner of The American Theatre Critics Association’s 2012 Francesca Primus Prize has a message which is “palpably sad, a comment on fate, unfairness and the limitations of the supposedly indomitable human spirit,” observed The New York Times.

Nine other works by Ryan have been commissioned, produced and developed by, among others, The Alliance Theater Company, Dorset Theater Festival, Florida Stage, Marin Theater Company, and Pittsburgh’s City Theatre and featured at NNPN’s National Showcase of New Plays. Scripts for young audiences have twice received the National Playwriting for Youth Bonderman Award and The Music Lesson also received the American Alliance of Theatre in Education’s Distinguished Play Award. http://tammyryan.net/index1.cfm

Nourishment flourishes along market aisles. Food for thought resides there, too.