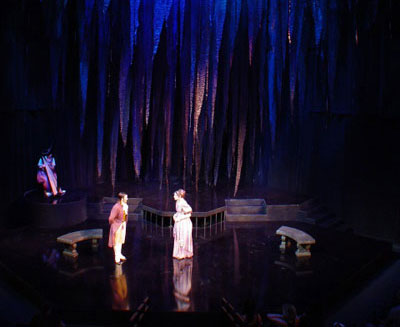 The liltingly lyrical tresses of the weeping willow feature prominently in at least a pair of Shakespearean tragedies. Hamlet has Ophelia going to her watery grave among the “coronet weeds” of a willow by a “weeping brook … her clothes spread wide and, mermaid-like, they bore her up.” Othello echoes the motif of the tree’s poetic tentacles, this time as the equally ill-fated Desdemona (jealous Moor, pillow, smother, goodnight fair lady) sings the bard’s variation of a traditional tune called “Willow:” Her hand on her bosom, her head on her knee, Sing willow, willow, willow; The fresh streams ran by and murmured her moans; Sing willow, willow, willow; Her salt tears fell from her and soft’ned the stones, Sing willow, willow, willow; The tree’s eerily frowning visage is here turned on its head by scenic/lighting designer Steven L. Williams in the University of Nebraska-Omaha production of Shakespeare’s comedy, Twelfth Night , a must-see work whose run ends this weekend. Must see? Sure, the production itself is entertaining enough, but this one is a “must see” if only for the chance to be regaled by one of the most stunning scenic and lighting designs of this or any other season. Williams’ interpretation of the weeping willow renders nearly 300 daggers of ethereally gossamer fabric — some measuring as much as 32 feet in length — suspended from the rafters to gently lap at the actors. At times rather static like so many towering stalactites in a dank cave, the translucent shards also come to slow-motion life as something akin to the swaying tendrils of an impossibly large jelly fish. Variously lit to suggest different moods, themes and settings, Williams’ willow is magnificent as he once again delivers an unforgettably organic backdrop (Updrop? All-around-drop?) that is a work of art in itself, one that would be my vote as a fitting replacement for the dated-the-day-it-was-installed Dale Chihuly glass menagerie that fills an atrium at the Joslyn Art Museum. Ben Beck, Erika DeBoer, Amy Schweid, Maggie Wilken, Bill Grennan and Raydell Cordell III acquit themselves admirably in meaty roles, but look also to lesser characters to punctuate this gem. Scottie Pace is stellar as a fool whose court jester’s costume belies a Machiavellian cunning. Nathan McCarty is hilarious as a fool who is, well, a fool. And I can’t wait for the next opportunity to see Matthias Jeske. This reedy, angular and handsomely Bowie-esque actor plays a foppish dandy who threatens to steal the show in hogging many of the funniest lines and moments. Then there’s Sharon Sobel’s Napoleonic costumes. Think Prince, Liberace and Adam Ant (circa “Stand and Deliver”) getting together for a garage sale to end all garage sales in an Enlightenment Era explosion of frills, frocks and finery. Add original music by Paul Boesing, masterfully played by harpist Amanda Fehlner, not to mention surprisingly strong performances considering that a young cast is here tackling difficult Shakespearean material, and director Cindy Melby Phaneuf’s Twelfth Night is a sensuous delight for eye, ear and heart. The University of Nebraska at Omaha’s Twelfth Night runs through April 23, Wed.-Sat. at 7:30 p.m., at the Weber Fine Arts Building at 6001 Dodge St. Tickets are $15 for adults, $10 senior citizens, $5 students with ID. Call 402.554.7529 or visit unomaha.edu/unotheatre for more information.