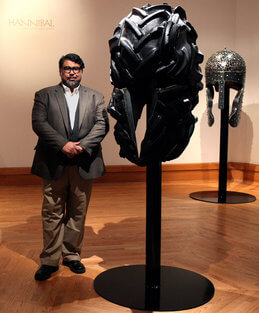 There is, as well, a counterpoint of large drawn portraits—including his vision of the man Hannibal, and an ink drawing of Surus, his lead elephant in battle, glowering down at us with snake-like trunk.

The massive size of this work, as well as the rough-steel beauty of the helmets demands that we give them our attention—and consideration as to their meaning.  This is an important body of work, we intuit—but it helps greatly to hear Littleton speak, as he did in his gallery talk recently, about his research and thinking in order to grasp his intent.

Alston had created other drawings and sculptures, but felt that to achieve the impact he desired, each artwork must have adequate light and space to present them to the greatest effect.  The shadows created by the helmets are as important as the sculptures.  And he promises there are more Hannibal works to come, given the importance of his message to us.

And what is the artist’s intent in this well-wrought display?  There is no “eye-candy” here. Littleton says that in history, there have always been points of pivot—decisions made that alter the future. Hannibal is one of these points of pivot. Had Hannibal, of Imperial Carthage, not confronted the Early Romans on elephants and with superior military strategy, the world then may well have been a very different place.

What if the Germans hadn’t gone into Russia in World War II?  Many think Hitler could have then defeated Europe.  What if Japan hadn’t bombed Pearl Harbor?  Would America have stayed out of that war until it was too late?  All of these are points of pivot, changing the world.

No images of the man Hannibal have ever been found. Born in 247 B.C., he attained the level of myth in later cultures as the epitome of a great warrior in battle. To revenge his father’s death by Romans, he planned a military strike using elephants and an army brought by ship from Carthage in North Africa, to southern Spain.

After defeating the Romans in Spain, he continued over the Pyrenees and the Alps, and through swamps, to conquer Central Italy. Contracting an infection on the way, he lost an eye, and fought 15 years of battles in Italy, with only one eye. When Carthage finally lost its position as an imperial power to Rome, Hannibal took poison to avoid capture.

Alston considers these years of pushback from the more advanced culture of Carthage as causing the Early Romans to switch from brutal marauders and pillagers. “I can’t see Rome becoming what it did without the play against them,” he said.

Many coins have been found in bronze, silver, and gold from later civilizations, honoring Hannibal’s military prowess, and rendered in the style of their own cultures—African, Greek, Renaissance.  The use of his imagined image continued much later, in America, with the Black Power Movement in the 1960’s, and in the 1970’s, a beer ad painted showing a handsome African-American as this ancient warrior. The precedence is there, continuing to make visual references to Hannibal, related to military might—even to this day.

According to Alston artists are the “canaries in the mines”—the most fragile voices that aren’t easily heard.  Now, looking back at art done in World War II, we can study the drawings of artists like Kathe Kollwitz and Otto Dix, to understand the mountain of cost of the war in Germany, as well as all of Europe.

Henry Moore’s “Shelter Drawings” are a poignant reminder of people’s lives in the many months of blackouts in Britain.  How many unwritten symphonies, great books and inventions might the world now enjoy, had we not lost millions of talented people in the Holocaust and war with Japan?

The sculptor’s arena is one of heavy lifting, literally and figuratively.  Here, one can use a huge language to become an agent of change.  By presenting us with machines of war, Alston queries whether we must continue making war a priority in the future, as it has always been. He asks us to hold ourselves to the hard questions, as artists, thinkers, citizens.  He sees America now at a new point of pivot… a time when we could take our knowledge of so many past mistakes and redesign a better future.

Perhaps this powerful display is meant to leave us with questions, not conclusions. Here we have an ancient warrior, pulled from the past to tell again his mighty story, told by a contemporary sculptor. Yet its absolute meaning alludes us in its complexity. The theme appears to be of war, but the lesson it gives may be war any society wages on several fronts home and abroad and the price it pays in its resource, human or otherwise.

Hannibal continues through Feb. 28 at the Lied Gallery at Creighton University in the Lied Educational Center for the Arts at 24th and Cass. For more information go to liedartgallery@creighton.edu.